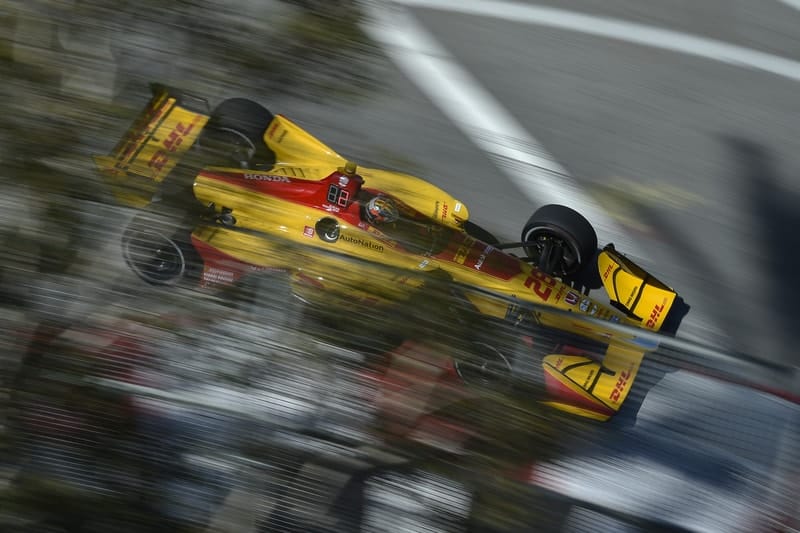 Ryan Hunter-Reay and Scott Dixon have topped the opening two practice sessions ahead of this weekend’s 2019 NTT IndyCar Series Grand Prix of Long Beach. Hunter-Reay topped the first session of the day, with Dixon taking over the top spot later in the day for practice two.

Near perfect conditions greeted the teams and drivers of the NTT IndyCar Series heading into the opening practice session of the event. It was also a near perfect start for Andretti Autosport‘s Ryan Hunter-Reay, who finished the first session as the fastest driver.

Hunter-Reay already had the fastest lap of the session under his belt as the session drew to a close, but a late lap would see him improve to set the best time of 1:07.9335. The lap would make him the only driver to lap underneath the 1:08 barrier in the session, with the American holding an advantage of just over two-tenths of a second.

Colton, along with the other rookies in the session, once again had an extra set of Firestone tyres for the opening session of the weekend, which the teenager put to good use. He’ll be hoping to bounce back from his unfortunate retirement from last weekend’s Grand Prix of Alabama to hopefully be in contention for his second IndyCar race win.

Another driver hoping to bounce back from a race retirement last weekend is Rahal Letterman Lanigan Racing‘s, Graham Rahal. Graham was fourth fastest in the opening session, four tenths slower than Hunter-Reay’s fastest lap. Last year’s dominant race winner at Long Beach, Alexander Rossi rounded out the top five, with another former winner, James Hinchcliffe, just behind in sixth place for Arrow Schmidt Peterson. Fifth-placed Rossi’s session was curtailed towards the end when he suffered a puncture.

Ganassi’s Felix Rosenqvist was seventh fastest, closely followed by the Team Penske trio. Simon Pagenaud, Josef Newgarden and Will Power occupied the final three positions inside the top ten, with Matheus Leist and Santino Ferrucci just outside of the top ten in eleventh and twelfth respectively.

Last weekend’s race winner, Takuma Sato was further back in fourteenth place. The aforementioned Dixon was the only driver who stood on the podium at Barber who made it into the top ten in the first session, as Sebastien Bourdais was much further down the order in twentieth place.

Carlin‘s Patricio O’Ward was the penultimate-placed rookie in the field, taking the sixteenth-fastest time, with Marcus Ericsson further down in nineteenth. 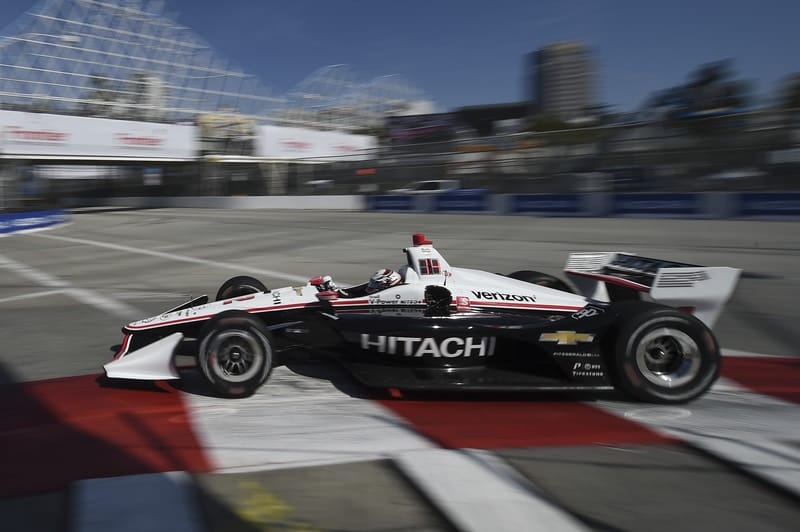 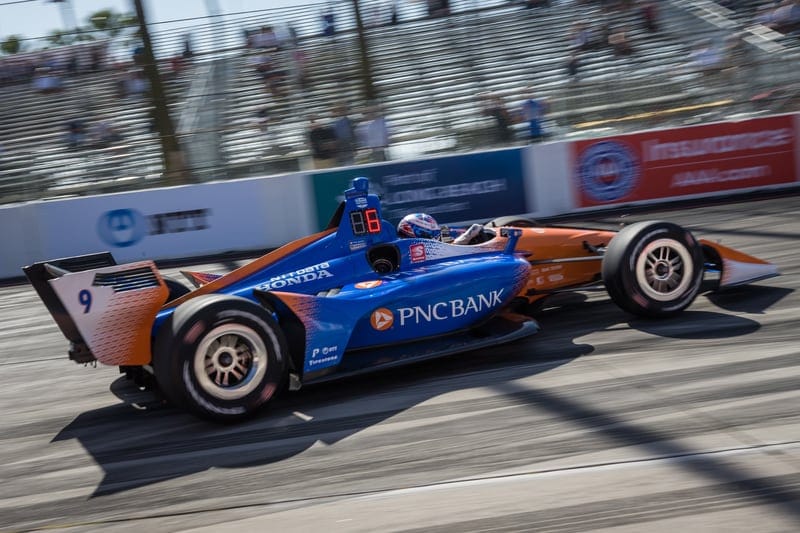 The streets of Long Beach were adorned with similarly gorgeous conditions in the second practice session of the day, as drivers and teams continued to get laps on the board to prepare as much as possible for qualifying tomorrow and the race on Sunday.

Much of the forty-minute session saw the motorsport equivalent of a tennis match between Ryan Hunter-Reay and Josef Newgarden. Throughout the session, the pair traded fastest lap after fastest lap at the top of the time-sheets, with each driver finding another tenth of a second with every lap.

Towards the end of the session, attention started to switch over to qualifying runs, with a number of drivers putting in fast laps as the clock ticked down. Both Hunter-Reay and Newgarden were able to dip into the 1:07’s, but ultimately it was Ganassi’s Scott Dixon who would sneak into the top spot and end the session as the fastest driver.

Dixon’s fastest lap was a 1:07.7940, which was two-tenths of a second faster than Hunter-Reay’s fastest lap from the opening session of practice. Hunter-Reay would have to settle for second place in the second session, slightly improving upon his time in the earlier session to set a 1:07.8434.

The second Ganassi Honda of Felix Rosenqvist took the third fastest time in the session, with the team hoping that both Scott and Felix can stay towards the top of the tables heading into qualifying tomorrow.

Fourth place would go to Josef Newgarden in the #2 Penske Chevrolet, with Carlin’s Patricio O’Ward completing the top five as the highest placed driver to have set their best lap on the primary tyre compound. O’Ward was the first driver to have not lapped under the 1:08 barrier.

Alexander Rossi and Graham Rahal were sixth and seventh fastest respectively, with Simon Pagenaud and James Hinchcliffe just behind in eighth and ninth. Marco Andretti rounded out the top ten, with Max Chilton lapping just three-tenths of a second slower than his aforementioned team-mate, O’Ward, to take the eleventh fastest time.

Colton Herta’s best lap in the second session was just three-tenths of a second slower than his run in first practice. Despite the reasonably small time deficit, it was enough to see Herta fall from third place in session one to thirteenth in session two.

Further back, it was another relatively inconspicuous session for Dale Coyne Racing and Sebastien Bourdais. The Frenchman finished practice one in twentieth place and only moved up to eighteenth in practice two. His team-mate, Ferrucci, ended the second session further back in twentieth place.

The two slowest drivers of the session both suffered issues. Twenty-second fastest, Jack Harvey, had a delayed start to the session after his Meyer Shank Racing team discovered a fuel leak just before the session started. Thankfully they were able to get the #60 Honda out on the track after some repairs.

The last driver on the time-sheets was A.J. Foyt Enterprises‘ Matheus Leist, who was responsible for the sole red flag during the session after he spun and stalled on the track. 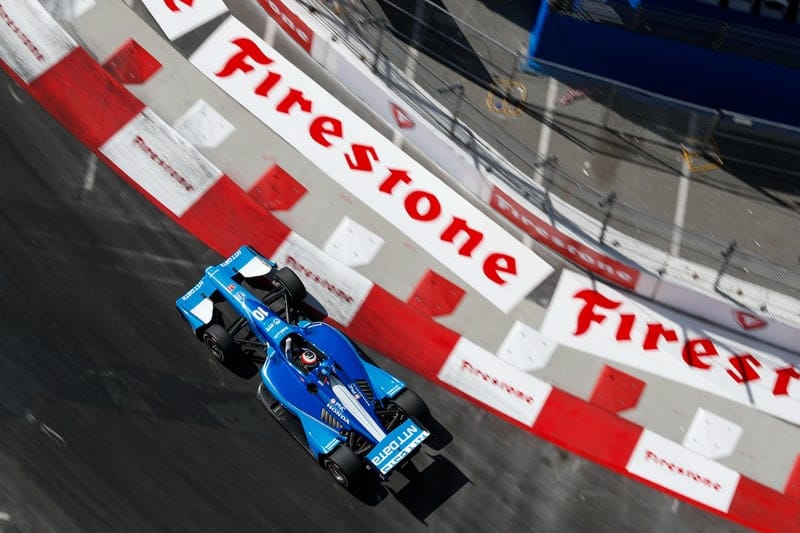 Full results of practice two can be found by clicking the following link: http://www.imscdn.com/INDYCAR/Documents/5525/2019-04-12/indycar-results-p2.pdf