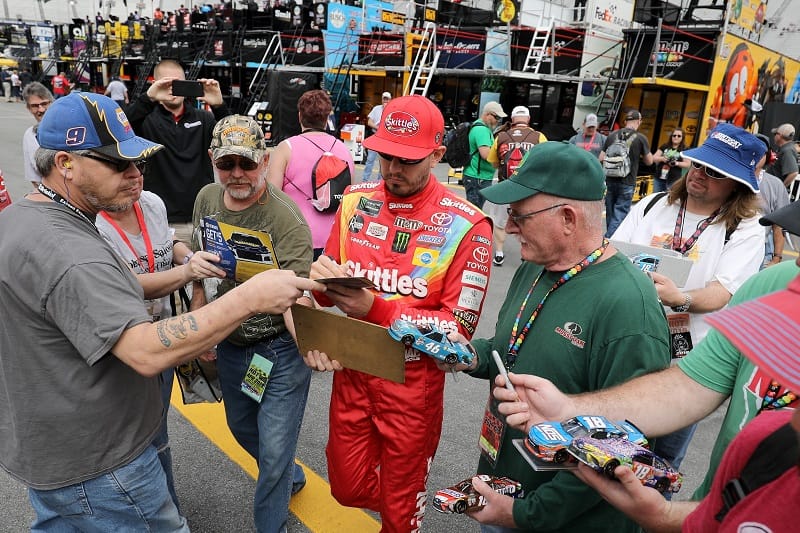 Kyle Busch continues to prove why he is the guy to beat in the Monster Energy Cup Series. After being involved in a wreck on just the second lap of Sunday’s Food City 500 at Bristol Motor Speedway, he bounced back to lead brother Kurt to a Busch Brother 1–2 finish.

It only took two laps for the carnage to begin as Busch was turned by Ricky Stenhouse Jr., while Byron and Aric Almirola were involved in a separate incident. For Busch, it marked his second straight opening-two-lap incident in a Cup race at Bristol after suffering a similar fate in August 2018’s Bass Pro Shops NRA Night Race.

Elliott and Jones led the restart on lap eight, though the latter quickly fell back as Clint Bowyer moved up to second. On lap 38, Ryan Preece cut a tyre, spinning in front of Elliott who was clipped by Corey LaJoie and sent into a spin of his own.

Denny Hamlin became the leader for the lap 46 restart, though Jones eventually pulled ahead. Ryan Blaney took the lead on lap 57.

Green flag stops began around lap 80, during which Kyle Larson suffered an uncontrolled tyre penalty. On lap 117, Daniel Hemric spun in turn one to set up a restart with two laps remaining in the stage; as Blaney and his Team Penske team-mates pitted, Bowyer took first. 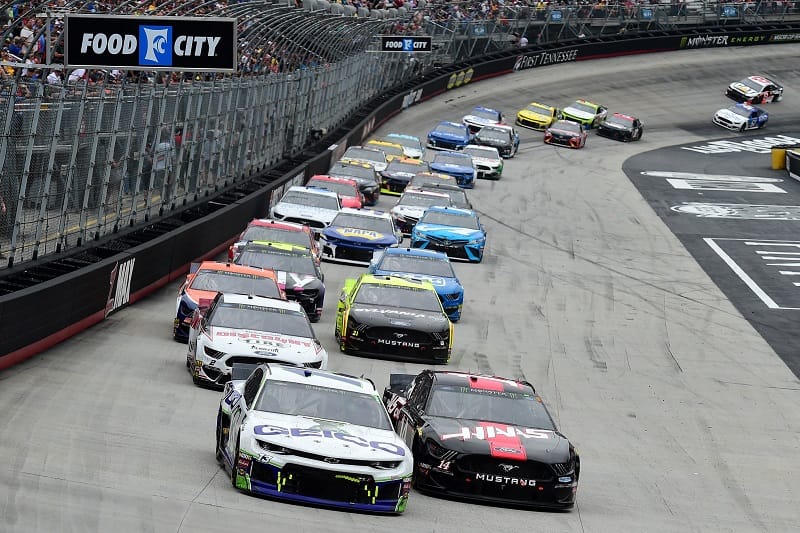 Penske’s Brad Keselowski and Joey Logano were the leaders to start the second stage.  The former led for 20 laps until the latter took over the position. Shortly after, Stenhouse returned to the race during the stage, albeit 45 laps down, until he went back to the garage on lap 195.

After the 200-lap mark, Matt Tifft spun to bring out the caution. Logano continued to lead at the restart and drove off to the stage win. Blaney finished second, followed by Ryan Newman, Keselowski, Kyle and Kurt Busch, Chris Buescher, Bowyer, Austin Dillon, and Daniel Suárez.

Blaney won the race off pit road, while Johnson and Suárez were penalised for speeding.

Seven laps after Stage #3 began, on lap 269, a caution came out for debris on the backstretch. Suárez eventually suffered a penalty for pitting outside his box.

The race resumed on lap 277 as Logano and Blaney battled for first. A second debris caution occurred on lap 376 before starting back seven laps later with Kyle Busch leading. Bowyer reclaimed first at the turn of the century-lap marker.

On lap 415, Byron and Larson made contact and wrecked. Although Hamlin was slated to be the leader, he was penalised for being too fast exiting his pit box and Busch became the leader. Bowyer also fell victim to the track with an accident of his own on lap 433.

Keselowski took the lead on lap 445, leading for 25 laps until Logano passed him. On lap 479, Larson was involved in another yellow. Before the restart, Keselowski was black flagged after lining up out of place; he was to restart between Newman and Bowyer, but failed to do so due to communication issues.

The race resumed on lap 487 with Kyle leading his brother Kurt. The latter could not beat his younger brother as Kyle drove off to his 54th Cup win and third of 2019.

“That one’s tough, I really wanted to beat him,” Kurt commented in a post-race interview with FS1. “I was gonna wreck him. I was wanting to stay close enough so that when we took the white (flag), I was just going to drive straight into (turns) three and four.

“I mean, he’s already won, figured he could give a little love to his brother. Nah. I wanted that one bad, I feel like him right now; I’m all mad because I didn’t win.”

By Justin Nguyen
1 Mins read
Kurt Busch’s Pocono concussion will now force him out of the #45 23XI Racing Toyota for the final two races of the regular season at Watkins Glen and Daytona. Ty Gibbs remains in the car.
NASCAR Cup Series

By Justin Nguyen
2 Mins read
Ryan Blaney will remain with Team Penske for many seasons to come as he signs a multi-year contract extension.
NASCAR Cup Series