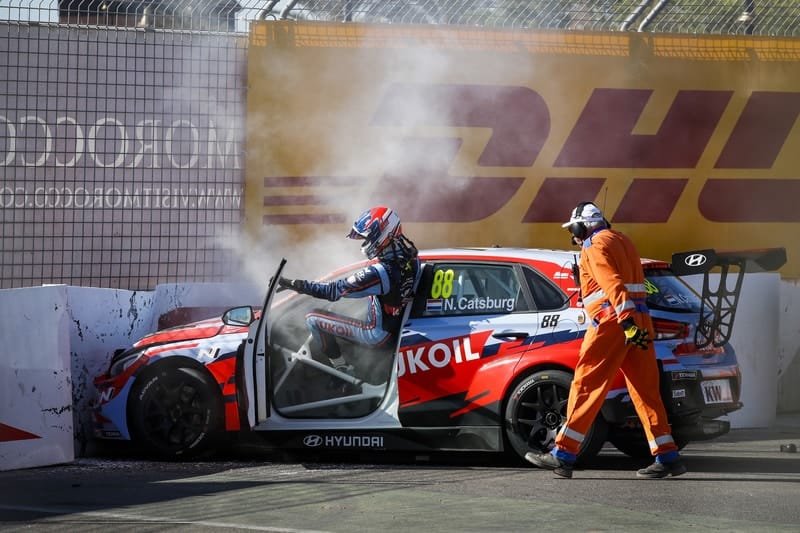 Gabriele Tarquini won the second World Touring Car Cup (WTCR) race of the new season, following a catastrophic brake failure for Nicky Catsburg who had been leading the race up until that point.

At the start of the race, Catsburg got a good launch off the line in order to fend off the fast-starting Tarquini, while the Honda duo of Esteban Guerrieri and Tiago Monteiro conceded positions to the Cyan Racing cars around them.

On lap three, a theme from 2018 continued as Sebastien Loeb Racing team-mates, Rob Huff and Mehdi Bennani, again made contact. Huff was pitched sideways by Bennani, while Gordon Shedden (who received a grid penalty for ignoring yellow flags in qualifying) launched an equally aggressive attack on the Cupra of Tom Coronel. Just as had been the case in the opening race of the year, Bennani then retired as a result of the damage he’d picked up. It was turning into a disastrous home event for the Moroccan.

Temperature management in the harsh Marrakech climate soon became a common theme amongst drivers, with most of the field taking the chance to fan out along the straights. As well as engine temperature, drivers would also have to be wary of brake fade due to the high levels of braking required around this circuit.

Unfortunately, the brakes on race leader Nicky Catsburg’s Hyundai would give way on lap 10, upon entry to Turn 10. The Dutchman therefore ploughed head-first into the tyre barriers, causing the safety car to be deployed. As a result of Catsburg’s misfortune, reigning WTCR champion Tarquini would inherit the race lead from his fellow Hyundai driver.

Ma Qing Hua was another casualty late on in the race. Punctures had been rife throughout the weekend so far, and Ma was unfortunately the latest victim of the tyre gods.

Up in front though, Gabriele Tarquini came across the line to take victory in the reversed-grid race at Marrakech, adding to his two race victories at this circuit last year. Behind him, Jean-Karl Vernay and Yann Ehrlacher rounded out the podium, while Esteban Guerrieri finished fourth after winning the opening race on Saturday.