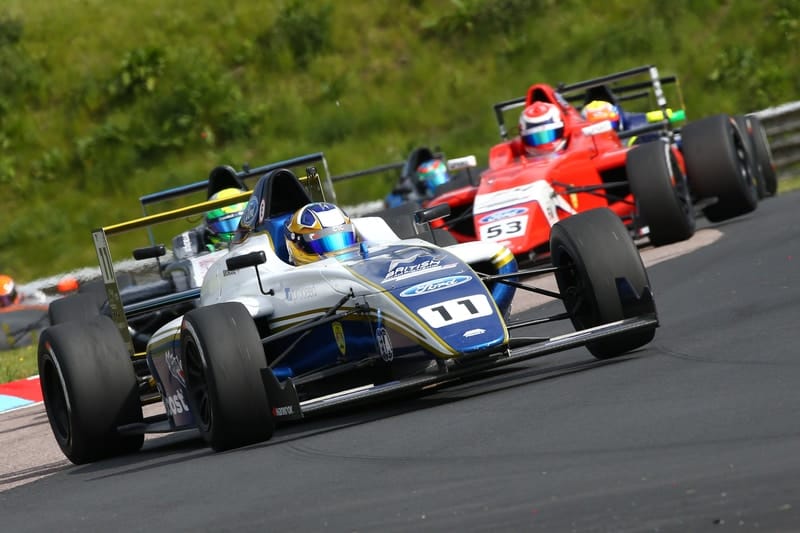 Luke Browning pulled off a number of daring overtakes to propel himself from fifth on the grid to take victory in the first race of the F4 British Championship certified by FIA – powered by Ford EcoBoost weekend at Thruxton.

The 17-year-old made up four places on the first lap alone in the sole Richardson Racing car before sizing up pole-sitter Louis Foster and launching down the inside of the championship leader into Club chicane just moments before the safety car was deployed for incidents involving Mario Martinez and Reema Juffali whilst Joe Turney ran off-road and dropped to last place from fourth on the grid.

“We keep on doing very well,” said Browning. “The plan is to keep on climbing up the order, tomorrow we’re starting one up from today.”

Browning attempted to shake Foster off at the restart but the Double R driver had his wits about him and stuck with the race leader before being overtaken himself by Carlin’s Zane Maloney, who had a disappointing start as he dropped to fifth place from second on the opening lap.

At race end, Browning held off Maloney for the win with Josh Skelton rising two places to take the last podium spot for JHR Developments. Bart Horsten showed great pace for Arden as he ascended to fourth place from eighth on the grid.

After issues in qualifying, a great recovery drive from the #94 Double R machine of Sebastian Alvarez saw him climb to fifth from ninth with Turney salvaging a decent result just two tenths behind in sixth.

Tommy Foster struggled to maintain his starting position of third and ultimately crossed the line in seventh a further three tenths behind the Carlin of Turney whilst Roberto Faria made the most of the misfortune around him to jump his Fortec from 11th on the grid to eighth at the checkered flag.

Alex Connor was unable to make up much ground, only gaining one place from his starting spot to claim ninth place whilst Louis Foster dropped down to 10th from pole after being forced to take to the grass on several occasions. Carter Williams crossed the line just over two tenths behind in 11th.

Non-finishers Martinez and Juffali round off the results after their early incidents.

Today’s result means Alvarez will start race two from reverse-grid pole with Horsten alongside and Skelton rounding out the top three.

Dougie Bolger moves up to British F4 with Carlin in 2021