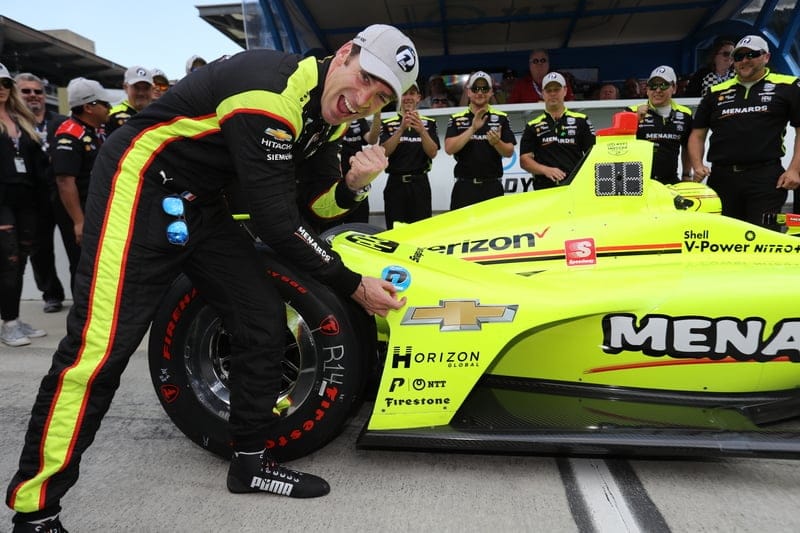 After taking pole position for this weekend’s 2019 Indianapolis 500, Team Penske‘s Simon Pagenaud has given credit to the entire team for giving him such a competitive #22 Chevrolet. Pagenaud was third-fastest after the first day of qualifying and went on to have the most consistent qualifying run of anybody on Sunday to take his first pole position for the famous race.

Entering the qualifying weekend, many predicted that Penske would be in contention for pole position alongside fellow Chevrolet team, Ed Carpenter Racing. After the first day of qualifying, those predictions seemed to be accurate, with ECR’s Spencer Pigot leading the time-sheets ahead of Will Power and Pagenaud.

After taking the third-fastest run of the day on Saturday, Simon would comment that his run had been “perfect” and that he felt as though he had “a shot at the pole” on Sunday.

“Honestly, that was a perfect run,” Simon said on Saturday, “The car was really phenomenal, as it has been all week. The conditions changed a little bit, but we extracted what we needed to out of the car. The wind was shifting quite a bit and it was tricky at times. Maybe we could have trimmed a little bit more [reduced downforce]. But overall, it’s great to have the Menards Chevrolet in the top three. I think we have a shot at the pole tomorrow.”

Rain overnight and on Sunday morning postponed the pole position shootout by almost five hours. The cooler conditions, coupled with the fact that all the grip on the race-track had been washed away by the rain, meant that the fastest nine drivers in contention for pole position would venture out onto a wildly different race track than they had encountered the day before.

The change of conditions seemed to slow a number of cars down. Pagenaud’s team-mates, Power and Josef Newgarden, simply could not find the speed they needed to challenge for pole, with all signs pointing toward a front-row lock-out for the three Ed Carpenter Racing drivers.

However, as qualifying neared its end, Pagenaud would head out onto the track in his #22 Chevrolet and would reel off three consecutive laps over the 230-mph mark. His last lap just dipped into the 229-mph range, but the run was enough to usurp the previous provisional pole-sitter, Ed Carpenter. Nobody else would displace Pagenaud as the session ended, putting Simon on pole position for the 103rd running of the Indianapolis 500. 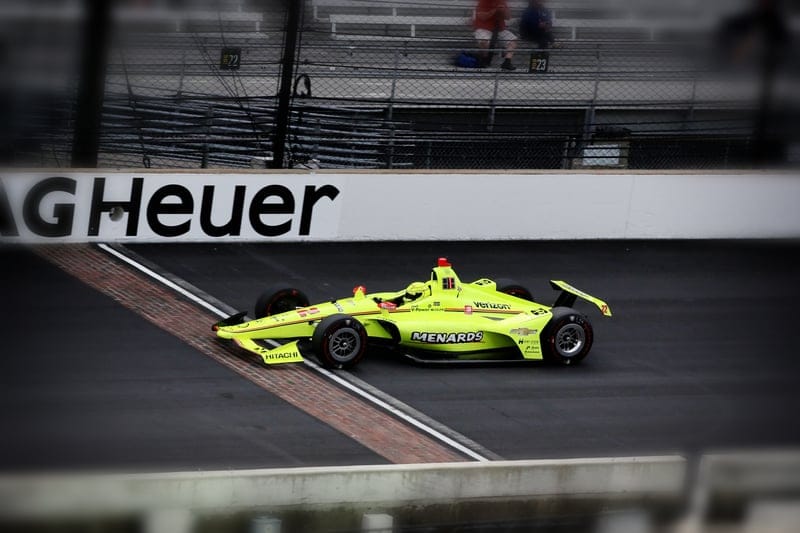 An ecstatic Pagenaud would celebrate wildly with his #22 crew after claiming pole position. In post-qualifying interviews, Simon would comment on how his pole position came as a result of “a team effort” from his Penske crew. Beforehand, he would talk about how he hoped that his pole position – the first for a French driver at the Indy 500 in a century after Rene Thomas took pole in 1919 – would help give the NTT IndyCar Series more recognition in Europe.

“It’s my whole team behind me that prepared me to here,” Pagenaud said after claiming pole position, “It’s a team effort, but obviously, super happy for France. I think this sport is a sport that I know France would really enjoy, and they do, so this can only help gain recognition over there and in Europe. So obviously, also having [Fernando] Alonso here was great for that.

“But it’s a team effort. I can’t take this for myself. This is truly what Team Penske does, and they give us the best equipment. Quite frankly, I’m at the very, very end of it all, so I’m just very honoured to drive this No. 22 Menards Chevy, which honestly, was incredible today.”

“I think when you look at Simon’s run today, it was amazing to see the consistency over 230 mph, which looked like Mears was qualifying there back in the old days,” Penske said, “But I just want to congratulate him in front of all of you.

“We had four good cars. He was strong all month, and I think when we had to execute, there was certainly one guy that was going to get on the pole, and that was Simon. All month they’ve been on the ball, and of course, the momentum coming off the road course win, you’ve got to think about that, too. A combined couple of weeks here has been terrific. Now we have to go on and get the big one.”

As Roger alluded to, Pagenaud will be hoping to complete the double at Indianapolis by taking back-to-back wins on the Grand Prix circuit and on the oval. If he does so, he will replicate his team-mate, Will Power, who accomplished the feat twelve months ago.

Two more practice sessions separate the drivers of the 2019 NTT IndyCar Series from the biggest race on the calendar. The 2019 Indianapolis 500 will take place this Sunday, May 26.

By Griffin Schmoyer
2 Mins read
Pietro Fittipaldi makes his return to IndyCar with Dale Coyne Racing with Rick Ware Racing, racing on the ovals for the No. 51 team along with former Haas teammate Romain Grosjean.
24 Hours of Le MansFormula 1IndyCar

By Robert Percy
2 Mins read
As a previous winner of the Monaco Grand Prix, Ricciardo would be in with a shot at getting the coveted Triple Crown of motorsport.