The 2019 MotoGP season has reached Europe! The Gran Premio Red Bull de España, the fourth round of the season, kicks off this weekend.

The Circuito de Jerez – The facts

With Marc Marquez seeking his seventh win at the Circuit Of The Americas, he started his weekend in the best way possible with a pole position. However as the chequered flag fell, it was Suzuki’s Alex Rins who took the win – which happened to be his maiden victory.

This victory means that Rins is the only rider to win at COTA in Moto3, Moto2 and MotoGP. However, his win didn’t come easy as he battled with Valentino Rossi, who ended the day in second. The battle ensued after pole-sitter, Marquez, crashed out of the lead of the race at turn 12.

The podium was completed by Jack Miller with championship leader, Andrea Dovizioso who finished the race in fourth.

Last year, British rider Cal Crutchlow began the Gran Premio Red Bull de España on pole, setting the all-time lap record in the process, ahead of Dani Pedrosa who started in second. But thanks to a race filled with action and drama, neither of these riders met with the chequered flag.

It was 2018 champion, Marquez, who took the race win – and who can forget his infamous “flossing” dance as he crossed the line! The Spaniard was joined on the podium by Johann Zarco, on the Monster Yamaha Tech 3 machine, and Andrea Iannone on the Team Suzuki Ecstar.

Jorge Lorenzo, the only rider to use a soft front tire, felt the effects of this decision after only three laps. Despite leading the race at the time, he proved no real battle for a dominant Marquez with his sites truly set on the win.

What to expect from the 2019 Jerez GP 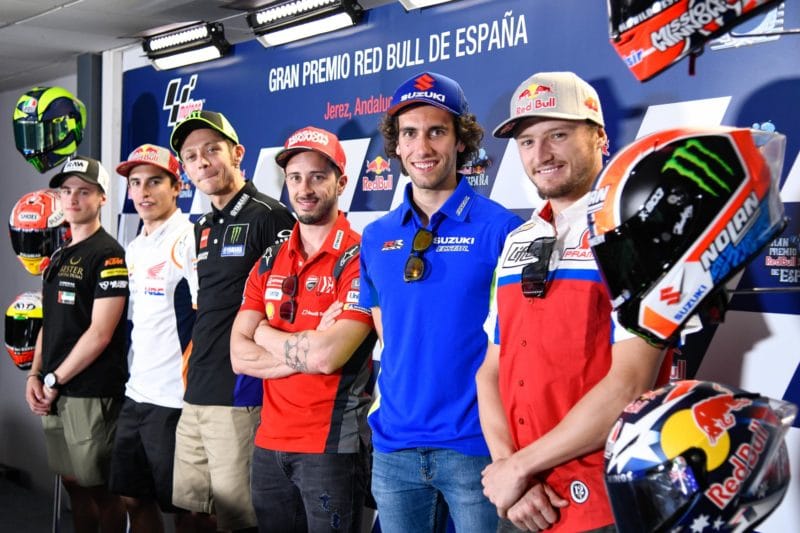 Starting his 200th race, Andre Dovizioso will be seeking to maintain his title lead as we enter the European leg of the season. However, this track hasn’t been a favourite for the Italian in previous years. To date, his highest result at Jerez has been two third-place finishes in 2006 and 2007 – so he will clearly be keen to turn the tables on this difficult history.

Meanwhile, inured Jorge Lorenzo also has a point to prove as he seeks to get his 2019 season off the ground. Unlike Dovizioso, Lorenzo has enjoyed plenty of success at the track, including five wins and five additional podium finishes, as well as seven pole positions.

He admitted that “I have been focusing on this race since the start of the season. Jerez is one of my favourite circuits. The surface normally has a lot of grip and this suits my style very well unlike a couple of tracks we have already visited.”

Despite being the reigning champion, Marquez will feel he also has a lot to prove this weekend, after crashing out of the lead at COTA, last time out. Like Lorenzo, he has also enjoyed success at the track in recent years, securing eight podiums in eight consecutive years – can he make it a ninth this weekend?

He stated that “Jerez is always a special race because it is the first in Europe and there’s a lot of support from the Spanish fans.”