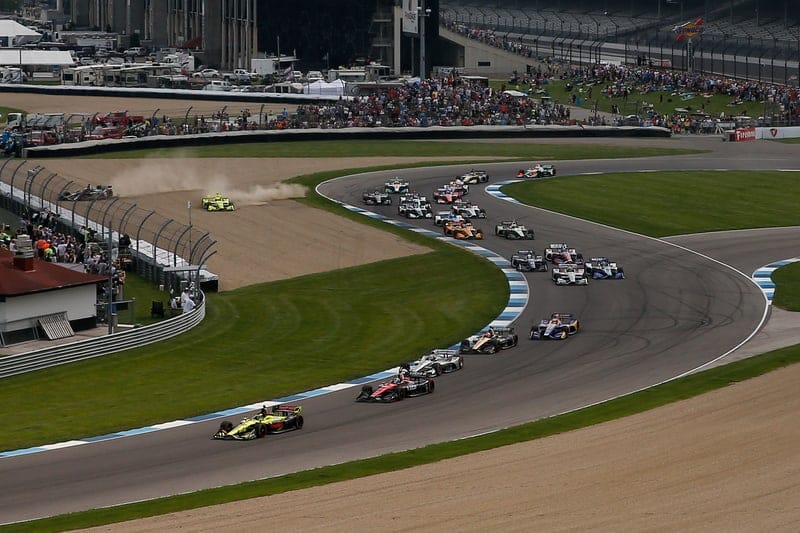 The all-important month of May for the NTT IndyCar Series has arrived. Before the biggest race of the season, the 2019 Indianapolis 500, there is the Grand Prix of Indianapolis to contest first.

The teams and drivers will take to the Grand Prix circuit at Indianapolis Motor Speedway this weekend for the fifth round of the championship. Here is everything you need to know ahead of Saturday’s race.

What happened in 2018 at the Grand Prix of Indianapolis?

Power would take pole position by less than a tenth of a second ahead of Schmidt Peterson Motorsports driver Robert Wickens, with the Canadian putting Power under pressure for the first half of the race. Power would hold off Wickens for the first stint, but the pair would be put on opposing strategies after the first round of pit-stops. Wickens would move onto the faster Firestone tyres, allowing him to pass Power soon after.

At the second stops, both Power and Wickens would swap tyre compounds, with Power moving onto the faster compound. This allowed him to chase down Wickens once again before retaking the lead with thirty-five laps remaining.

A caution shortly thereafter would see the field bunched back up, with Power maintaining the race lead on the restart. Wickens, however, would soon come under pressure from Chip Ganassi Racing‘s Scott Dixon, who miraculously found himself up in third place on the restart despite starting the race down in eighteenth.

Dixon would soon pass Wickens to move into second place, but he would not be able to get properly onto the back of Power to challenge for the win. In the end, Power would take the chequered flag with an advantage of just over two seconds to Dixon. Wickens would complete the podium in third place.

The win would be Power’s third on the Indianapolis Grand Prix circuit and would give him great momentum heading into the Indy 500 later in the month; where he would go on to take the victory and put himself back in championship contention.

You can read the full reports from last year’s qualifying and race at Indianapolis by following the links below:

What should I look out for this weekend?

After four rounds of the 2019 NTT IndyCar Series, Team Penske’s Josef Newgarden leads the way in the championship standings with a twenty-eight point lead over Andretti Autosport‘s Alexander Rossi. Newgarden has had a fantastically strong start to the season, with one victory, three podiums and a fourth place to his name.

Indianapolis Motor Speedway has not been the greatest of hunting grounds for Josef, the 2017 series champion. The American has only taken to the podium once in the 2016 Indy 500 and has yet to finish higher than eleventh on the Grand Prix circuit. With 2019 being his strongest start to an IndyCar season yet, look to see if the Penske driver can right the wrongs of the last few years at Indianapolis to be in contention this weekend and at the 500.

On the other hand, Newgarden’s team-mate, Will Power, will be hoping that history repeats itself. As mentioned earlier, Power put in a fantastic performance on the Indianapolis Grand Prix circuit a year ago, winning the race from pole position. What’s more, he would go on to do the double at Indianapolis by winning the Indy 500 a few weeks later.

Twelve months ago, Power was in a similar position to where he is now. Power has not had a good start to the season. He currently sits seventy-three points off of the championship lead down in sixth place in the standings; with only a podium at St. Pete to his name after retiring from the race-lead at COTA and also finishing outside of the top ten at Barber Motorsports Park after tyre and fuel issues as well as a spin. Long Beach would also not go according to plan, with Will finishing in seventh place after making a mistake and locking-up at turn one, forcing himself into the escape road.

His Indy GP win last year, coupled with the Indy 500 win shortly thereafter, would propel him back into championship contention. Now, he’ll be hoping to do the same, as he hopes to put himself back in the running for a second IndyCar title.

A number of the 2019 rookies will be hoping to impress on the Indianapolis Grand Prix circuit. Harding Steinbrenner Racing‘s Colton Herta will be hoping for a return to the form he had back at the Circuit of the Americas where he took his maiden victory, especially after two dismal previous races at Barber and Long Beach, where he failed to finish both times.

On the other hand, some of Herta’s fellow rookies, Marcus Ericsson, Felix Rosenqvist and Patricio O’Ward, will all be hoping to stand on an IndyCar podium for the first time this weekend. All three have shown flashes of brilliance so far this season, but none of the trio have made quite the impact that Herta has. If any of them want to try and take the rookie of the year honours away from Herta by the end of the season, they will have to start making in-roads as soon as possible.

One final driver to keep an eye on this weekend will be the returning veteran, Helio Castroneves. The Brazilian will be stepping back into the cockpit of his Team Penske #3 Chevrolet for the two races at Indianapolis this year like he did last year after moving from racing full-time in IndyCar to the IMSA WeatherTech SportsCar Championship.

In the five IndyCar races held on the Indianapolis Grand Prix circuit, Castroneves has finished inside the top six on every occasion. Helio has stepped on the podium twice at the road course race, finishing third in 2014 and second in 2016. It will be a pretty tall order for Helio to get onto the top step of the podium in his first IndyCar race in a year, but if anyone can do it, Castroneves can.

Where can I watch the 2019 Grand Prix of Indianapolis?

Tickets are still available for this weekend’s race. Head to the Indianapolis Motor Speedway website for more information.

As a part of the IndyCar’s UK coverage deal, both qualifying and the race will be broadcasted live on Sky Sports F1.

In the United States, television coverage for the Grand Prix of Indianapolis will be shown on NBC Sports.

Further coverage of practice and qualifying will be provided in the United States by NBC Sports Gold.

How can I keep up to date with all the race action?

If you cannot make it to Indianapolis for this weekend’s race, you can keep up to date with all the action across the weekend right here at The Checkered Flag. We will have coverage of this weekend’s practice, qualifying and race sessions.