Yann Ehrlacher started the final World Touring Car Cup (WTCR) race of the weekend from pole position, having inherited the front row spotlight from the penalised Yvan Muller. Ehrlacher wouldn’t remain in the lead for long however, as despite a very firm defence off the line, team-mate Thed Bjork moved up into first place.

Further back, the usual first lap jostling for position occurred in the midfield and beyond, however there were no casualties this time around.

Confusingly, as the cars headed onto lap three, Thed Bjork – who was leading the race, and is Cyan Racing‘s top-placed driver in the championship – was asked to allow Yann Ehrlacher to retake the lead. The Swede respectfully did so, however eyebrows had been firmly raised by this unusual application of team orders.

As a result of this decision, some have surmised that the team had already decided which order they wanted their cars to finish in, before the race had even started.

The plot to this story then thickened further as the Cyan Racing engineers got back onto their team radio, seemingly to undo the apparent agreement that had been made. The team promptly made the order to swap the positions between Ehrlacher and Bjork once again, citing the Frenchman’s robust initial defence as the reason why. Ehrlacher was audibly upset by this, claiming that as he had the “weakest engine”, he had no choice but to defend harshly.

However, Ehrlacher showed no sign of reciprocating the same courtesy that Bjork had done earlier, and instead put in the fastest lap of the race on lap seven in an apparent attempt to extend his lead.

Eventually though, as the pair headed onto lap nine, Ehrlacher conceded to the team’s orders and allowed Bjork back into the lead of the race at Turn One. That said, he was by no means happy to do so, which was evident as the inter-team argument was being broadcast live on air for the world to hear. 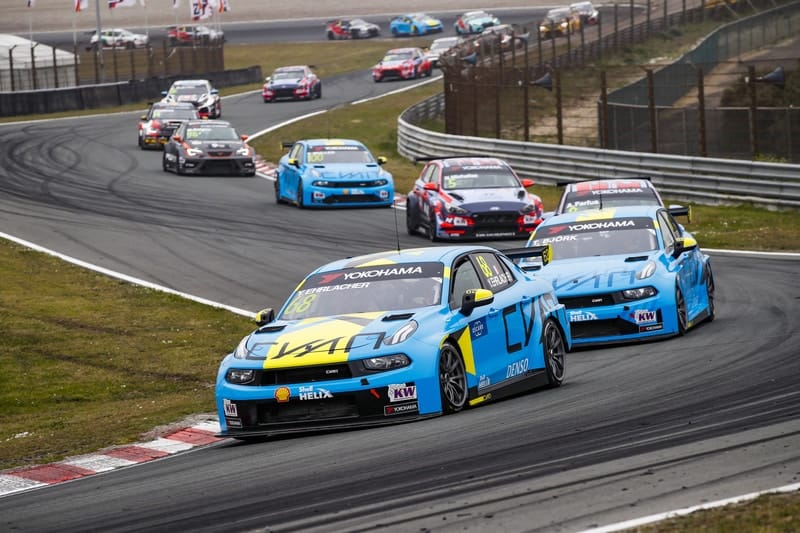 Cyan Racing were becoming integral to the narrative of the race. Image Credit: Florent Gooden/DPPI

Away from the Cyan Racing drama, a battle had emerged amongst the cars in the lower end of the points-paying positions. Rob Huff was being made to defend from fellow Volkswagen racer, Benjamin Leuchter, who in fact pushed a little too hard and ended up running wide into turn ten. This put the German under pressure from Aurelien Panis, while Mehdi Bennani and Nestor Girolami were also going at it for fourteenth position just behind.

A fairy-tale weekend for Leuchter, who scored his first WTCR podium finish in the previous race, then began to take a turn for the worse. His Volkswagen was hit with a sudden loss of power, rendering him helpless to defend from the cars behind. It was an unfortunate way to end what had been an uplifting event for his team thus far.

Further back, the tight nature of the Zandvoort circuit began to grate with the drivers stuck lower down in the order. Kevin Ceccon made his frustrations known on his team’s radio, suggesting that there was “nowhere” to pass despite feeling as though he was significantly quicker than Niels Langeveld in the car ahead of him.

Elsewhere, the Cyan Racing strategists were being given even more of a headache. The team’s third driver on the road – Yvan Muller – was running in fifth, and could see what had occurred between Bjork and Ehrlacher at the front of the field. The veteran racer was seemingly irked by this and felt a need to chime in with his thoughts on the situation, unsurprisingly backing the opinion of his close nephew, Ehrlacher.

Regardless of the outcome, it was now apparent that this race had at least temporarily caused a lot of bad feeling between certain factions within the Cyan Racing team; an outfit which until now had been seen as a very united front.

Back with the midfield bunch, and Nestor Girolami was once again eyeing up an attack on Mehdi Bennani for fourteenth position. However, as the cars headed into turn ten, Girolami got his Honda all crossed up. Thankfully, his lightning quick reactions prevented him from visiting the gravel trap, but he was now under big pressure from Jean-Karl Vernay and Andy Priaulx behind.

Despite the tricky nature of Zandvoort, the midfield pack provided a handful of entertaining battles. Image Credit: Florent Gooden/DPPI

With the cars all bunched up at the final corner, the fourth of the Cyan Racing drivers – Andy Priaulx – ran ever so slightly wide. That was enough for him to be put under threat by Frederic Vervisch, who launched an attack on the outside line into turn one.

Priaulx held his ground though, and while one Briton was staunchly defending his position, another was looking to work their way up the order. Just ahead, Rob Huff dived past Nicky Catsburg for tenth place on the inside line at turn seven, but Catsburg immediately retaliated with a cut-back into turn eight. The pair remained side-by-side into turn nine, at which point the track curved in Huff’s favour.

Onto the final lap, and having fended off Vervisch, Priaulx was now attacking Vernay for fifteenth.  He was running out of corners fast, but in the end, that didn’t seem to matter as Vernay’s Audi emerged hobbled from the final turn with an apparent mechanical failure.

Priaulx therefore nabbed the final points-paying position right at the death, while his team-mates Thed Bjork and Yann Ehrlacher secured one of the unhappiest 1-2 results that you’ll ever see.

Speaking of team orders, Augusto Farfus was denied his first podium finish of the season, dutifully giving it up to fellow Hyundai driver – and serious title contender – Norbert Michelisz.

With all three races at Zandvoort now having been concluded, Esteban Guerrieri‘s successful attempt at damage limitation ensures that he leaves the Netherlands with an 11 point lead in the championship standings. Thed Bjork is now in second place, a further 15 points ahead of Nestor Girolami who had a weekend to forget.

Michelisz wins Race One but Guerrieri & Muller limit the damage

Leclerc Feels ‘Work on Track’ will be ‘Extremely...