Dixon and Herta fastest in Friday practice sessions at Mid-Ohio 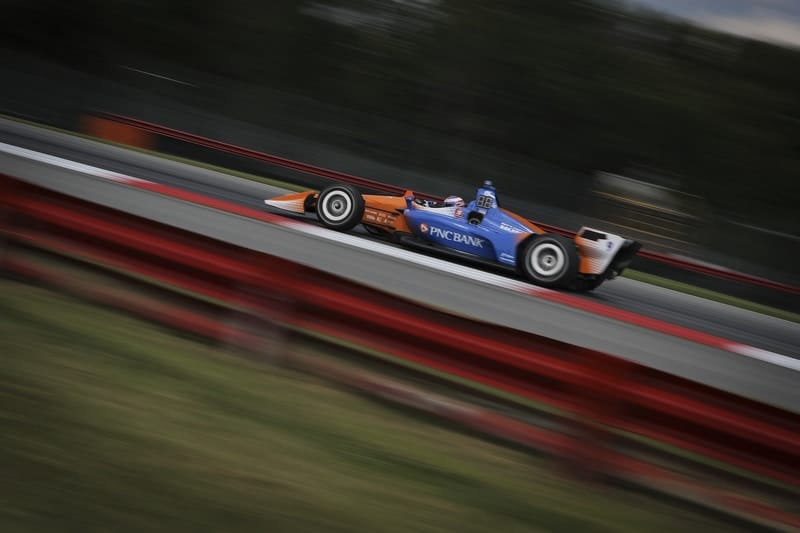 Scott Dixon and Colton Herta have set the fastest times in the two Friday practice sessions prior to this weekend’s 2019 NTT IndyCar Series Honda Indy 200 at Mid-Ohio.

The first of the two practice sessions at Mid-Ohio kicked off under the beating sunshine of Lexington, Ohio. The forecast this weekend is set to be perfect, with sunny and clear skies throughout all three days of running.

It took a little while for the majority of the drivers to head out onto the race track to complete their first laps of the weekend, with drivers waiting for the track to rubber in a little more so that they could collect more meaningful data once they eventually ventured out onto the track.

Almost fifteen minutes of the session passed before a large number of drivers began to trickle out onto the track, with Team Penske‘s Simon Pagenaud soon putting himself to the top of the time-sheets ahead of the early pace-setter, Felix Rosenqvist.

The track continued to get quicker and quicker as the session went on. By the end of the session, was Chip Ganassi Racing’s Scott Dixon who had worked his way to the top of the scoring pylon. He would end the session with a best lap time of 1:06.0973. By comparison, last year’s pole position time set by Alexander Rossi was a 1:04.6802; so it’s safe to say that we are likely to see the lap-times get faster and faster throughout the remainder of the weekend’s running.

Ed Carpenter Racing‘s Spencer Pigot was the second-fastest driver of the session and the fastest Chevrolet-runner. His best lap was just over a tenth of a second slower than Dixon’s best. Pigot will be hoping that his speed maintains throughout the weekend as he looks to turn things around and score what would be only his fourth top ten finish of the season in Sunday’s race.

Third-fastest went to the last race-winner on a road course or street circuit. Team Penske‘s Simon Pagenaud will be hoping that he can take his third consecutive pole position in qualifying tomorrow to put him in a strong position to win on Sunday and thrust himself further back into championship contention. His team-mate, championship-leader Josef Newgarden, was just behind him in fourth place and will be hoping to win for himself to try and further extend his advantage in the points standings.

Fresh off of his first podium of the season last weekend at Iowa Speedway, Arrow Schmidt Peterson‘s James Hinchcliffe finished the first practice session in Mid-Ohio as the final driver in the top five. Andretti Autosport‘s Ryan Hunter-Reay and Penske’s Will Power were just behind in sixth and seventh respectively.

As previously mentioned, Ganassi’s rookie Felix Rosenqvist was one of the early pace-setters after heading out onto the track at the start of the session. He would improve upon his early time to end the session with the eighth fastest-time; albeit as one of the few drivers to have had a spin during the first forty-five minutes of practice.

Sebastien Bourdais and Max Chilton completed the top ten in the session, with Max once again returning to the cockpit this weekend for Carlin in the #59 Chevrolet after missing last weekend’s oval race at Iowa. Another returning British driver, Meyer Shank Racing‘s Jack Harvey finished the session just behind in eleventh place having not raced in the NTT IndyCar Series since the Indianapolis 500 back in May.

Further back, Newgarden’s closest championship-rival, Alexander Rossi, finished the session down in thirteenth place and will be expecting to be much faster throughout the rest of the weekend. The Californian was just over a second slower than Newgarden.

In his first NTT IndyCar Series race weekend session since 2016, Carlin’s RC Enerson was twenty-first fastest as he focuses on getting acclimated with the car ahead of the race on Sunday. Enerson tied with Rosenqvist to set the joint-most amount of laps completed during the session, having toured the circuit twenty-four times.

Full results of practice can be found by clicking the following link: http://www.imscdn.com/INDYCAR/Documents/5636/2019-07-26/indycar-results-p1.pdf

With the second practice session taking place in very similar conditions to that which will be seen in qualifying tomorrow, the focus for many of the teams and drivers was on single lap speed.

As the session’s end drew near, the times slowly started to get faster and faster. It looked as though Team Penske were on course to top the session, with Will Power setting the fastest time earlier on before being pipped by just two-hundredths of a second by his team-mate, Simon Pagenaud.

However, Harding Steinbrenner Racing‘s rookie, Colton Herta, had other ideas. With less than ten minutes remaining, Herta would put in a lap-time of 1:05.7292-seconds to take the fastest lap by two-tenths of a second. This time would not get beaten in the remaining minutes. Herta will be hoping that his speed continues so that he can try and chase his second victory of the season; a much-needed boost after a torrid few months since his historic win back at the Circuit of the Americas.

The aforementioned Simon Pagenaud and Will Power would have to settle for the second and third fastest times of the session. Felix Rosenqvist would take fourth, improving upon his time and position from the first practice session earlier in the day. The top five would be completed by Andretti’s Ryan Hunter-Reay. Arrow Schmidt Peterson’s James Hinchcliffe was just behind in sixth place, with Rosenqvist, Hunter-Reay and Hinchcliffe separated by just one-hundredth of a second.

A.J. Foyt Enterprises‘s Matheus Leist put in a fantastic run to take the seventh-fastest lap-time of the session with a lap that was within half a second of the fastest-time set by Herta. It is fair to say that 2019 has been a torrid season so far for both Leist and A.J. Foyt Enterprises, so a strong finish in Sunday’s race could do the world of good for the squad as they begin to shift focus onto the 2020 season.

Meyer Shank Racing’s Jack Harvey continued to impress in the second session of the day. He would end the session with the eighth-fastest time, with the British driver hoping for a strong result this weekend on his return to the series after almost two months away.

Ed Carpenter Racing’s Spencer Pigot placed inside the top ten for the second session in a row, finishing as the ninth fastest driver. Sebastien Bourdais, the early leader of the session, ended the session in tenth-place.

The session was interrupted by one red flag period that came in the final minutes. The cause: championship leader Josef Newgarden. The American ran wide onto the grass towards the end of the lap and was thus dragged off of the race track and into a spin. He would hit the wall with the rear of his car, thus bringing his session to a premature end with the eleventh-fastest time and a hit to his confidence heading into qualifying tomorrow.

Two of Newgarden’s three closest rivals in the championship failed to place inside the top ten in the session. Andretti’s Alexander Rossi continued to struggle and would only set the thirteenth fastest time, with Scott Dixon placing further back in sixteenth place. Both will want to be well inside the top ten and in the hunt for pole position tomorrow.

Carlin’s RC Enerson continued to improve on his return. The American would set the fifteenth-fastest time of the session and was less than a second slower than Herta’s time in first place. However, Enerson landed himself in hot water with two of his fellow competitors at the end of the session, with both Herta and Tony Kanaan going to speak with Enerson on pit-road post-session after both felt as though he had compromised their final laps.

Finally, there was one team and driver who were meant to be in attendance at Mid-Ohio this weekend who will sadly not be competing after last-minute issues. DragonSpeed were meant to be making their penultimate start of their part-time 2019 schedule this weekend with British driver Ben Hanley. However, both driver and team were hit with VISA issues and will thus be unable to make it to the circuit in time.

The team are slated to make their final appearance at the season-finale at WeatherTech Raceway Laguna Seca in September, but the team may decide to add another appearance in to substitute for their absence from Mid-Ohio this weekend; the most likely event being the penultimate round at Portland International Raceway.

Full results of practice can be found by clicking the following link: http://www.imscdn.com/INDYCAR/Documents/5637/2019-07-26/indycar-results-p2.pdf

By Griffin Schmoyer
1 Mins read
Oliver Askew will withdraw from the IndyCar Harvest GP after being diagnosed with a concussion.
IndyCar

By Griffin Schmoyer
2 Mins read
Zach Veach has announced that he is relinquishing his Andretti Autosport seat for the rest of the 2020 season and beyond.
Formula 1IndyCar

By Paul Hensby
2 Mins read
Colton Herta, the youngest driver to ever win an IndyCar race, would love the chance to race in Formula 1 in the future if the opportunity arises.