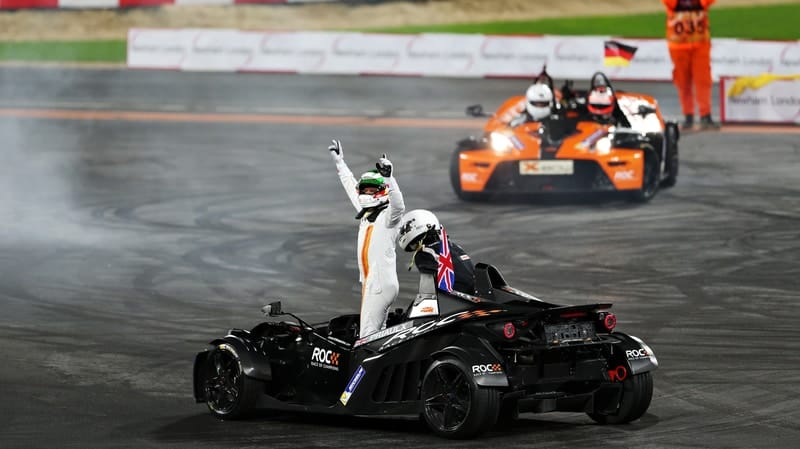 For many sports, the most prestigious trophy that can be won is a World Cup. The joy of winning a World Cup can reduce grown adults to tears and a loss can trigger heartbreak. Athletes dedicate their lives to excel at a World Cup and defeat results in the end of dreams for another few years.

However, motorsport does not have this opportunity for drivers. Of course, winning and losing a championship is extremely emotional but defeat can be resolved the following year. Therefore, it does not have the same consequences as losing in a World Cup.

Every year, the Race of Champions is held in a selected stadium. The competition pitches drivers from around the world and different disciplines against each other. Each round is a head-to-head race between two drivers and is a best of three format. Therefore, the winning driver proceeds and the losing driver is eliminated. The event is held over two days; on one day, drivers race for their country and on the other day, drivers race for themselves. To see the likes of Rally legend Sébastien Ogier take on Formula 1 legend Sebastian Vettel is quite a sight to see. However, this is only a fun event where drivers put on a show for the crowd and thus it is not a serious affair.

Another example of motorsport’s attempts to take on a World Cup was the A1 Grand Prix series.  The series ran from 2005 to 2009 and when looking back, some then future big stars took part. For example, the likes of Sergio Pérez raced for Mexico and Will Power drove for Australia. The aspect that made this series so unique is that drivers represented their nation and not a team. Unfortunately, the series was not well managed and went into liquidation in 2009. Despite this, 78 races were held. Across these, 134 different drivers entered at least one A1GP race which shows the potential the series had. Consequently, I believe if the directors had made this series a biennial or triennial championship, it would have lasted longer.

The main feature from these two series, is that competitors drive equal machinery. The motorsport industry is so advanced now with teams trying to find milliseconds worth of advantage through technological advancements. By pitching drivers against each other in equal machinery, a true world champion would be found.

In 2015, the FIA created the GT World Cup that is held annually during the Macau GP weekend. Unlike the previous two competitions, this is a race in which manufacturers are pitched against each other. However, the aim of the race is to win as a team and help your manufacturer claim the bragging rights for the next year instead of your country. Since its inauguration, the German manufacturers have dominated with Mercedes and Audi winning twice and BMW taking the win last year. Despite being a great event that puts the top GT drivers against each other on an incredibly difficult circuit; the ability to tune the car and the use of different machinery, does affect the equality across the field. However, the size and quality of the grid shows how willing drivers are to compete in one-off series like this.

One of the main gripping features of a World Cup is that players come from their different club sides to unite with their fellow countrymen. In a sport like football, this is relatively easy because when they play for their club team, they are still playing football. With motorsport, the different disciplines mean that drivers specialise in different areas. For example, a rally driver will be much quicker sliding a car around a rally stage than a track racer would be. Despite this, drivers are often versatile and as the Race of Champions proves, they often are very similar when they are given equal machinery and have learnt the track.

As a result, a format that could work for a group stage, is one like MAC3 used in World Touring Cars in 2016. MAC3 stood for Manufacturers Against the Clock where three cars per manufacturer completed two laps of a track; where the last car determines the time set. It was based upon the time trials in cycling where participants work as a team to obtain the fastest time. Despite the idea failing to take off in other series, it did show potential for an idea which could work in a World Cup scenario.

The first round of the knockout stages could be a range of A1GP style races where each driver must participate. Similar to a championship scenario, points could be awarded to the drivers. From this, an accumulated total across the races would determine which nations progress through to the quarter-finals. For example, a country could put all its drivers in one race so they can work as a team; however, this could badly affect the accumulated total once all the races have taken place. Similar style races could be held in the quarter-finals and the semi-finals but at different tracks around the host country.

As a result of these races, it could whittle the final grid down to 20 countries. These teams would then compete in a two-hour endurance race where at least four different drivers would have to be used. This would allow teams to experiment with different strategies to attack for the win.

At first, a World Cup in motorsport would struggle to gain momentum. However, with time I believe it would begin to grow. If you look at any new motorsport event in the world, it starts with negative feedback and a slow build-up. A good example of this is Formula E. The series has only grown exponentially in its first five years and is now a fan favourite across the globe.

Furthermore, it would create a great opportunity for young and upcoming drivers to partner more prestigious and experienced countrymen. Similar to the Olympics, rules could be introduced to say teams need to be made up of specific requirements. For example, a team must have at least one club racer. The inclusion of certain rules could result in stars that would not have been found prevailing.

With countries around the world boasting many tracks within them, the list of potential host countries is very large. On top of this, with drivers constantly going overseas to increase their racing prospects, ‘home’ drivers might not have the advantage that some may believe.

In conclusion, I believe a World Cup in motorsport would not only create an amazing spectacle but it would also increase viewing figures for motorsport. A lot of people have a viewpoint of motorsport which revolves around processional Formula 1 races they have watched and I believe a World Cup could change that. For example, popular opinion is that cricket is a boring sport but after the scenes of yesterday’s final, a lot of people are having to backtrack on those statements.

As a closing thought, when the new Nürburgring was opened in 1984, Mercedes invited every living Formula 1 world champion to race a Mercedes 190E around the track. Despite nine F1 champions being present on the twenty-car grid, a young 24-year-old named Ayrton Senna (who was only three races in to his F1 career at the time) ran away with the win. Although many of the ex-champions did not take the race overly seriously, the talent Senna had did not go unnoticed. Only when the playing field is equal, do the real champions emerge.

By Nigel Chiu
6 Mins read
Everyone loves a top 10, do these tracks deserve to make the cut? And which one is Nigel Chiu’s number one?
Formula 1Opinion

Daniil Kvyat - The Decline of a Young Talent

By Fergus Mckie
12 Mins read
For Russian Daniil Kvyat, it has always been a case of what could have been? We look back at his career and where it went wrong
FIA World RallycrossOpinionSeason Review