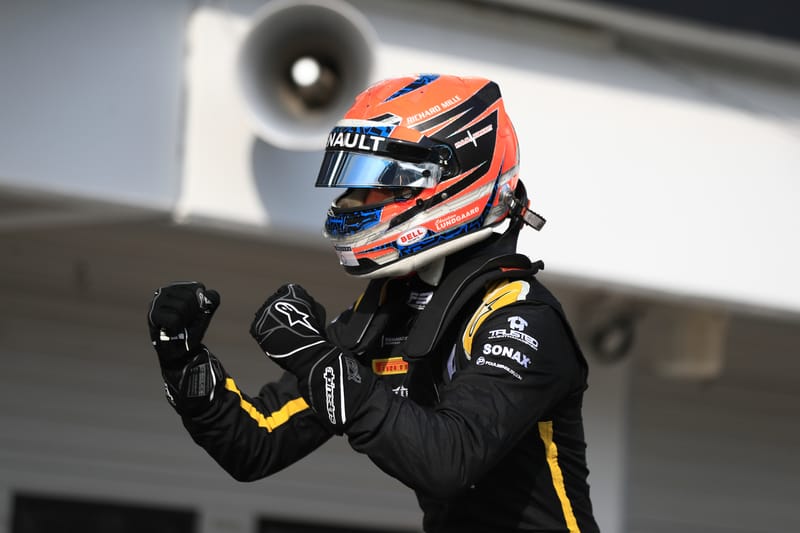 Christian Lundgaard dominated to win in Budapest to the win the first race of the weekend in the FIA Formula 3 Championship.

The Dane led from pole ahead of Jüri Vips, Max Fewtrell and Robert Shwartzman, whilst the other PREMA Racing drivers of Marcus Armstrong and Jehan Daruvala had ground to make up from thirteenth and seventeenth.

Not too much changed in the first half of the twenty-two lap race but Pedro Piquet toured into the pits with brake failure whilst in third position, as that first victory in the newly-rebranded FIA Formula 3 continued to elude the Brazilian.

Yuki Tsunoda overtook David Beckmann for ninth on lap nine round the outside into Turn Two, as the Japanese pilot continued to impress in his rookie season in the third tier.

Lundgaard carried on leading by over two seconds over Fewtrell at the end of lap ten while Niko Kari locked up into Turn One on four laps later but managed to keep hold of third ahead of Vips.

Armstrong passed Alex Peroni for eleventh on the following lap into Turn Twelve, as Daruvala got by on the Australian on the next tour.

Armstrong sneaked ahead of Beckmann and took tenth place with six laps to go, as Kari went across over the chicane at Turn Six after locking up but Vips got ahead of him on the following lap, as Jake Hughes made his way through as well. Armstrong shortly after past Tsunoda for ninth on the into Turn Twelve.

Beckmann and Peroni made contact at Turn One and both dropped down the order, as the German retired in the pits with only three laps remaining.

Kari continued to lose grip and time, with Felipe Drugovich and Leonardo Pulcini easily passing the Finn on the penultimate lap. Further ahead, Hughes overtook Vips for third at the second corner and was up into the final podium position.

Lundgaard won from pole ahead of Fewtrell to complete an ART Grand Prix one-two. Hughes, Vips, Shwartzman, Drugovich, Pulcini, Armstrong, Tsunoda and Logan Sargeant. Daruvala missed out on the points by two and a half seconds in eleventh. Lundgaard got the extra two points for the fastest lap and Armstrong will begin tomorrow’s sprint race from reverse-grid pole.

Currently, a Journalist at The Checkered Flag, writing articles most especially within the single-seater categories of motor racing including F1, F2, F3 and Formula E. I've recently graduated from the University of Lincoln with a Masters in Sports Journalism and a Bachelors in Media Production. Also a Regional Edward R. Murrow Award winner by the Radio Television Digital News Association (RTDNA).