Lundgaard Heads the Pace in Opening F3 Session at the Hungaroring 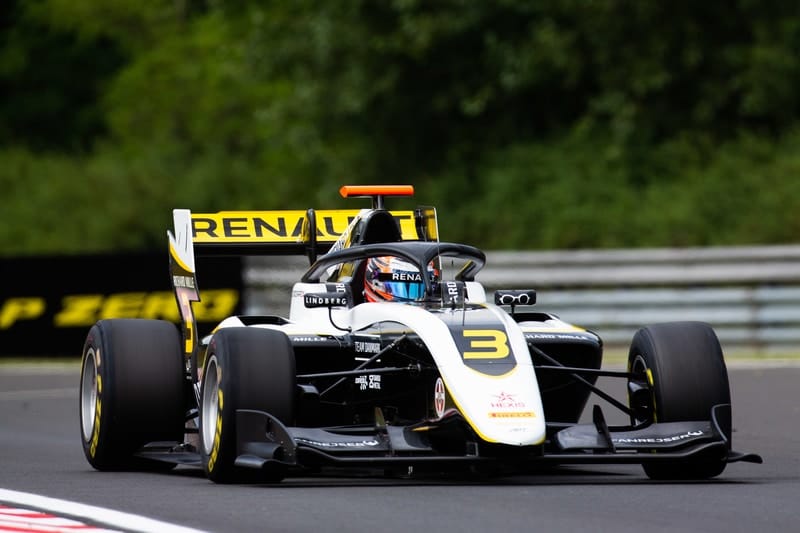 Christian Lundgaard was quickest in the FIA Formula 3 Championship practice at the Hungaroring for ART Grand Prix ahead of Pedro Piquet and Jake Hughes.

In an overcast opening to the day in Hungary, Giorgio Carrara in his second running in the championship setting the pace in the 1m38s. However it did not take long for the PREMAs of Robert Shwartzman, Marcus Armstrong and Jehan Daruvala shot into the top three.

Leonardo Pulcini spoilt the PREMA party by going third ahead of Daruvala. As the Indian started slipping down the timesheets, he headed back to the pits with Shwartzman joining him.

Armstrong remained out on track and finally toppled the Russian on his third attempt – before joining his team-mates in the pits.

With the Italian squad in the pits, Raoul Hyman and Hughes edged out to take first and second with eleven minutes to go.

The PREMAs soon headed back on track and it was quickly a PREMA 1-2-3 once again.

Felipe Drugovich, Hyman, Pulcini and Piquet all leapt ahead in the final few minutes before Lundgaard upped the pace with a searing lap.

As the chequered flag dropped nearly all the field were able to set another lap, with the timings seeing a shake up.

Piquet and Hughes moved up into second and third with Max Fewtrell going fourth fastest.

Championship leader Shwartzman was fifth ahead team-mate Armstrong and Pulcini was seventh.

Qualifying for the Feature Race tomorrow gets underway at 9.00 local time.

By Joe Ellis
2 Mins read
A huge six tenths of a second gap for Victor Martins at the top of the times after early morning rain affected the first day of the F3 test.
Formula 3

By Joe Ellis
2 Mins read
A first taster for what is to come as FIA Formula 3 returned to the track. Aleksandr Smolyar was quickest but Jonny Edgar and Jak Crawford have made strong starts to their rookie campiagn.