Quatararo leads the way on day one in Brno 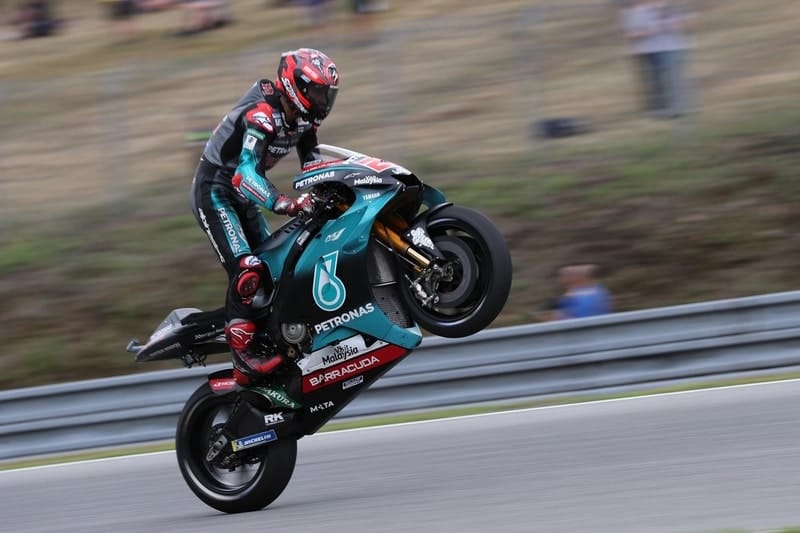 MotoGP returned from its summer break for round ten of the championship, which saw Fabio Quatararo produce a late surge to top a very competitive Friday ahead of championship leader Marc Marquez and Jack Miller.

The Petronas Yamaha rider started the day slowly as he finished in a surprising eighteenth, but then delivered a brilliant lap in the final five minutes to lead Marquez by the slender margin of +0.023s.

Speaking of Marquez, the Repsol Honda man focused heavily on race pace as he is accustomed to doing on a Friday, but with rain predicted for Saturday and the soft tyres being ran throughout the field, Marquez himself took the opportunity to improve his position and stay in the top ten.

Miller was an impressive third for the Pramac Ducati team, one spot ahead of Andrea Dovizioso. Both riders set identical lap times in Free Practice 2, but the Australian had a faster second lap giving him the edge in the standings.

Dovizioso will be looking to get his championship challenge back on track in Brno after a disappointing run of form in recent races, and the Italian made just the start he needed by topping the morning session.

The 33 year-old was the winner here eighteen months ago, and having not taken victory since the opening round in Qatar, it goes without saying this is a must win weekend for him and Ducati.

Along with Dovizioso and Marquez, it was Maverick Vinales who was consistently at the front during the two sessions, before finishing fifth fastest for Monster Energy Yamaha.

Vinales has roared back into top form over the last few races, and the Spanish rider will start the weekend alongside Marquez as the heavy favorites for victory.

Alex Rins was sixth fastest for the Ecstar Suzuki team and looked fast on all tyre compounds he tested, ahead of Franco Morbidelli on the second Petronas Yamaha.

Cal Crutchlow improved from fifteenth place in the first practice session to finish the day eighth overall, ahead of Valentino Rossi and Danilo Petrucci who rounded out the top ten.

Rossi lost valuable track time with a mechanical issue in the second practice session, but fortunately for the Italian he managed to salvage a top ten spot in the closing stages.