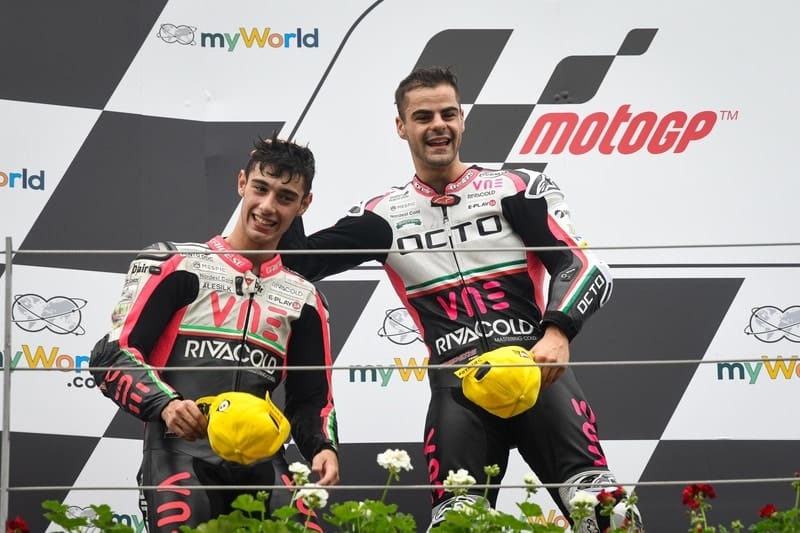 Romano Fenati celebrated a fantastic weekend at the myWorld Motorrad Grand Prix von Österreich (Austrian GP), the Moto3 veteran despite being sanctioned in qualifying 6 hours after claiming pole and then subsequently having his lap cancelled demoted him to 2nd. The VNE Snipers pilot had his best weekend this season at the Red Bull Ring with a well deserved win.

Tony Arbolino taking 2nd with a gap of 1.097 behind his team-mate and 3rd was also highly contested as John McPhee just grabbing that last spot on the rostrum on the line ahead of Celestino Vietti.

Romano Fenati has won his first race since Japanese Grand Prix way back in 2017, a resurgence that was a surprise if we are all being honest based on how the season has played out so far for the Italian and because all eyes have been on the Aron Canet and Lorenzo Dalla Porta battle for the title.

All riders decided on slicks as the track was damp but it wasn’t bad enough to warrant the Wet choice. However, turn 4 and the last sector was really wet so riders had to take care around that part of the track. The wets could have been a gamble if rain was forecast but losing 6 seconds a lap would be the price to pay if the heavens didn’t open.

As the lights went out John Mcphee didn’t get to a great start and Tony Arbolino and Romano Fenati ceased the advantage by getting ahead and controlling the race but neither man was going to let the other have the glory, team orders were not at play here and if they were, the two VNE Sniper riders didn’t get the memo. Arbolino was tapping the back of his seat to get Fenati to work with him but the moto3 veteran was not going to comply as he had his eyes set on the top step.

The front pack consisting of Romano Fenati, Tony Arbolino and John McPhee with just under a 3-second gap over the second group following which consisted of Lorenzo Dalla Porta, Marcos Ramirez and Makar Yurchenko. The Damp Conditions were at play as Aron Canet and Albert Arenas fought for that valuation dry line at turn 10 which led to Cant almost coming off.

Albert Arena’s team-mate wasn’t so lucky as Raul Fernandez slid off at turn 9 which more or less destroyed the Sama Qatar Angel Nieto Team chance at a decent finish, in fact, he ended up as a DNF.

It was clear that the Chasing pack of Lorenzo Dalla Porta and Co were not going to catch up with the leading pack unless there was a catastrophic mistake by all three riders in front as a 4-second gap had developed which meant we were looking at the podium but in which order?

Romano Fenati clearly had the pace as he was setting the fastest lap time and time again with no answer from the others until lap 22 when Celestino Vietti of SKY Racing Team VR46 set a 01:36.587 but it was not enough to dethrone Fenati of his lead. Jaume Masia was also putting pressure on and a lovely move to overtake Vietti at turn 3 was successful but sometimes its the conditions that play its part as a move on John Mcphee at turn 9 was blocked by the scot and Masia ran wide off the dryline and the 250cc Single cylinder high sided the Bester Capital Dubai out of the race.

Romano Fenati was clear ahead of the chasing group now and the real battle was for 2nd or 3rd. Arbolino, Vietti and McPhee were battling, however, an all Italian podium was not to be and McPhee shot out of Turn 10 taking the last place of the podium by a mere 0.015, and a whisker away from a 2nd place finish but tony Arbolino held a 0.008 lead over the Petronas Sprinta Racing rider. A fantastic end to the race with all riders treating us to a battle to the checkered flag.

The lead in the championship battle swung once again with only ONE point between new Leader Lorenzo Dalla Porta and Aron Canet. Again we look forward to the next race where one mistake could mean disaster for the title contender. Tony Arbolino has thrown his hat into the ring (no pun intended) if he carries on with these kinds of results the other two will have to start to worry.