Armstrong wins in F3 at an emotional Spa 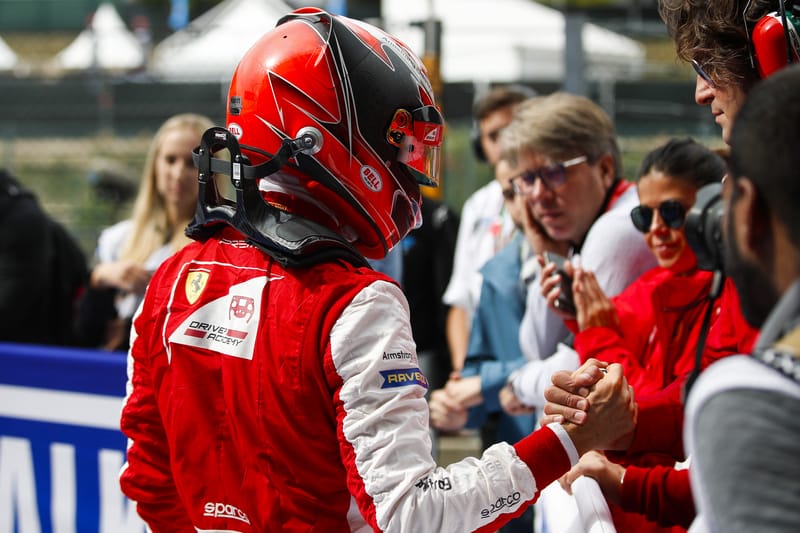 Marcus Armstrong converted his reverse-grid pole into the race win for the second round running in the FIA Formula 3 Championship.

Before the start of the event, the grid paid tribute with a minute silence for the 2018 GP3 Series champion Anthoine Hubert, who had died following an accident in a Formula 2 Feature Race on Saturday afternoon.

Armstrong was clear of the pack just like in Hungary for the opening few laps whilst Leonardo Pulcini, who was on the front row next to him, went wide at La Source on Lap One and dropped to seventh.

That allowed Yuki Tsunoda and Christian Lundgaard to leap up to second and third positions by the end of the first lap.

Small drops of rain began to fall but only around the sections of La Source to the Bus Stop Chicane. Pulcini started making up for lost time and passed Jehan Daruvala for fifth on Lap Three on the Kemmel Straight.

Moments later saw the Safety Car deployed after Simo Laaksonen went head on into the barrier at Blanchemont but the Finn was unharmed from the accident. By this stage, it was Armstrong leading Tsunoda, Lundgaard, Robert Shwartzman, Daruvala, Pulcini, Pedro Piquet and Max Fewtrell making up the top eight.

The restart was back on at the end of Lap Eight but Jüri Vips running ninth made contact with Fewtrell and broke his front wing coming out of the Bus Stop Chicane and saw his championship hopes slipping. Fewtrell would later stop out on the racetrack with a rear puncture at Les Combes.

With the rain gone away from the circuit, Jake Hughes and Devlin DeFrancesco came together at the same corner and both limped back to pits with terminal damage. Six laps to go and Piquet, who had won the first race of the weekend, nipped past Pulcini for sixth place.

The penultimate lap saw Tsunoda alongside Lundgaard lunged down in the inside into Les Combes and was on course for his best result in Formula 3. Shwartzman would slipstream his way past the ART Grand Prix to put himself into the final podium place.

Armstrong though was untroubled throughout the race to win by four and a half seconds ahead of Tsunoda and Shwartzman. Daruvala was fifth and the other title contender Vips finished in twenty-first and over ninety seconds behind the winner.

Marcus Armstrong also got the two points for fastest lap and is now three points adrift of third place Jüri Vips. Robert Shwartzman however continues to extend his lead at the top to twenty-three points over Jehan Daruvala with two rounds remaining at Monza next weekend and in Sochi at the end of September.

PREMA Racing have also sealed the Teams’ Championship for this year’s FIA Formula 3 Championship, as it is mathematically impossible for them to be caught.

By Joe Ellis
2 Mins read
A first taster for what is to come as FIA Formula 3 returned to the track. Aleksandr Smolyar was quickest but Jonny Edgar and Jak Crawford have made strong starts to their rookie campiagn.
Formula 3

By Joe Ellis
1 Mins read
Kaylen Frederick makes the step up to Formula 3, leaving just three seats open ahead of the 2021 season, all at Charouz.