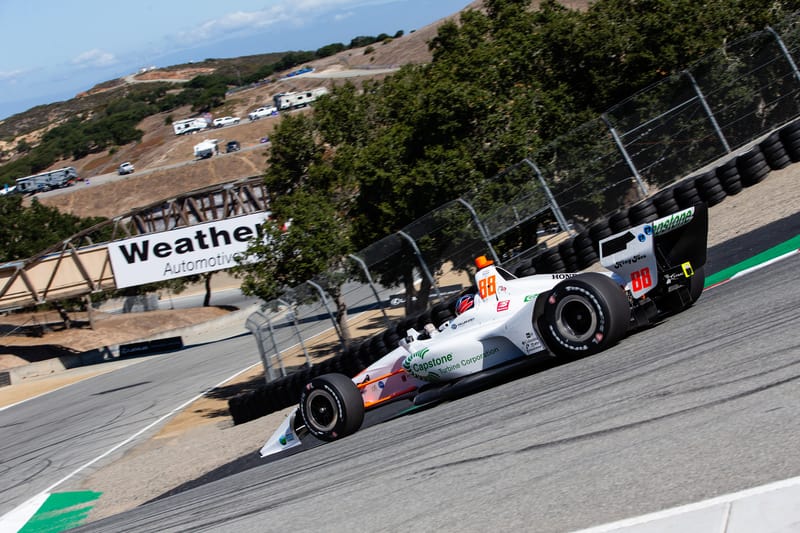 Colton Herta and Ryan Hunter-Reay have taken the fastest times in the opening two practice sessions ahead of this Sunday’s 2019 NTT IndyCar Series season-finale, the Firestone Grand Prix of Monterey at WeatherTech Raceway Laguna Seca. Herta was fastest in the first session of the day, with Hunter-Reay taking over with the quickest time of the weekend so far in the second session.

Three rookies topped the time-sheets in the first of two Friday practice sessions ahead of the Grand Prix of Monterey. The drivers didn’t enter the session completely blind, as many had taken part in a six-hour test session on Thursday to get acclimatized to the returning WeatherTech Raceway Laguna Seca.

Harding Steinbrenner Racing’s Colton Herta ended Thursday’s test session as the fastest driver with a lap-time of 1:10.0720. In the opening session of Friday practice, Herta was fastest once again, this time with a slightly slower lap-time of 1:10.7335.

Colton took over the top spot inside the final minutes of the session, but moments after setting the fastest lap, he would spin into the gravel on the exit of the famous ‘corkscrew’ corner. The session would end slightly prematurely, with Herta being pulled out of the gravel so he could take his #88 Honda back to the pits.

Chip Ganassi Racing‘s Felix Rosenqvist ended the session as the second-fastest driver, with just seven hundredths of a second separating the pair. Dale Coyne Racing‘s Santino Ferrucci made it a 1-2-3 for rookie drivers, with just over a tenth of a second separating all three. The leading trio are the three drivers in contention for the rookie of the year honours heading into Sunday’s season-finale, with Rosenqvist currently leading Ferrucci and Herta.

Team Penske‘s Will Power set the fourth-fastest time with a best lap of 1:11.0024. Zach Veach was fifth-fastest for Andretti Autosport, with sixth-placed Simon Pagenaud being the fastest of the four championship contenders. Sebastien Bourdais and Spencer Pigot placed just behind in seventh and eighth respectively.

Championship-leader Josef Newgarden took the ninth-fastest time of the session with a lap-time that was half a second off of Herta in first place. Newgarden commented after the session that he would be hoping for more uninterrupted running in the second session, as two red flags came late in the session after many had waited to venture out onto the circuit.

The top ten in the session would be completed by A.J. Foyt Enterprises driver, Matheus Leist. Further back, the third of the four championship contenders, Scott Dixon, was fourteenth-fastest after having completed only eight laps. That was, however, not as bad as the fourth and final championship contender, Alexander Rossi, who propped up the session in twenty-fourth and last place after only completing four laps with a best time of 1:12.9932. Andretti Autosport later commented that Rossi had been suffering from a “hardware issue” with his #27 Honda. He will be hoping to make up for the lost time in the remaining practice sessions leading up to Sunday’s race.

Full results of practice can be found by clicking the following link: http://www.imscdn.com/INDYCAR/Documents/5694/2019-09-20/indycar-results-p1.pdf

The times got quicker and quicker in the second session of practice at WeatherTech Raceway Laguna Seca. With the track rubbering in more and more and the faster compound tyres fitted to the cars for the final minutes of the afternoon session, we saw the fastest time of the weekend so far right in the dying moments of the session.

After the lead of the session changed hands numerous times during the final minutes of practice two, it looked as though Chip Ganassi Racing’s Felix Rosenqvist was on course to finish the session as the fastest driver with a scintillating lap-time of 1:09.9305; the first lap-time recorded in the 1:09’s so far this weekend.

However, as the session entered it final minute, Andretti Autosport’s Ryan Hunter-Reay would just edge out Rosenqvist’s best lap to take the top spot for himself with a lap-time of 1:09.9105. He would thus end the session as the fastest driver, with Rosenqvist settling for second place. The leader in the first session, Colton Herta, would take the third-fastest time, with a tiny margin of just two-hundredths of a second separating all three.

For the second session in succession, Simon Pagenaud was the fastest of the four championship contenders. He would take fourth-place in the session. It wasn’t a mistake-free session for the Frenchman, however, as he made a trip through the gravel at turn one at the exact same time that fellow contender Scott Dixon bought out the red flag after spinning on the entry to the final corner.

Dale Coyne’s rookie, Santino Ferrucci, showed decent speed for the second session in a row. He completed the top five, with championship-leader Josef Newgarden and reigning champion Scott Dixon just behind him in sixth and seventh respectively. Just one-tenth of a second separated Newgarden from his team-mate and title rival Pagenaud ahead of him, so Newgarden won’t be too worried about his pace compared to his rivals heading into qualifying and the race.

Penske’s Will Power, Schmidt Peterson’s Marcus Ericsson and Carlin‘s Charlie Kimball rounded out the top ten in the second session, with just half a second covering the entire top ten.

It was another session to forget for title contender, Alexander Rossi. The Californian once again was right down on the time-sheets when the session ended, with Rossi taking twenty-third place out of the twenty-four runners with a best lap-time of just 1:11.0234 after thirteen laps completed.

However, Alexander did not complete a lap on the faster compound of tyre during the session and would go on to record a 1:10.0988 lap-time in the ensuing pit-stop practice session later on; finishing the session as the fastest driver. Despite what appeared to be a nightmare opening day of the final race weekend of the season, Rossi could be right back in the mix in qualifying tomorrow and the race on Sunday. Due to double points being awarded this weekend, just one slip-up from the championship leader, Newgarden, could open the door wide open for Rossi or Pagenaud to strike.

Full results of practice can be found by clicking the following link: http://www.imscdn.com/INDYCAR/Documents/5695/2019-09-20/indycar-results-p2.pdf