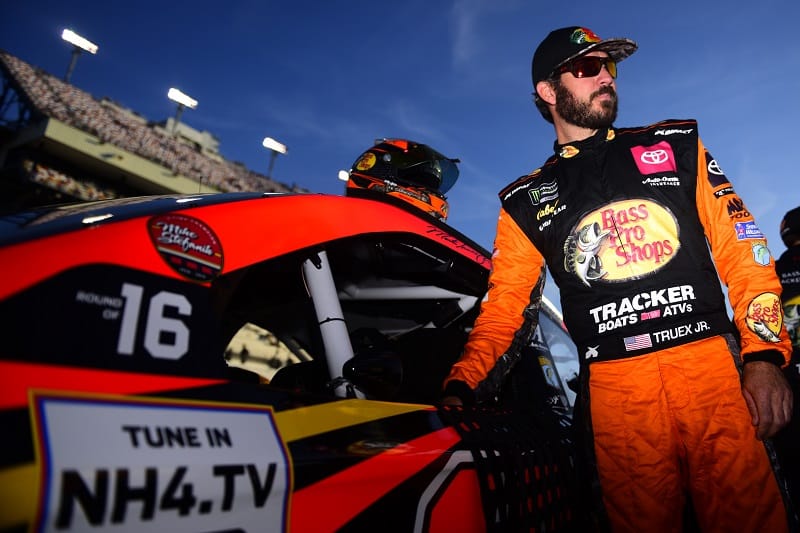 The 21st night of September saw Martin Truex Jr. dance into the night as he took victory in the Federated Auto Parts 400 at Richmond Raceway. After passing Joe Gibbs Racing team-mate Kyle Busch with 25 laps to go, Truex held him off to score his second straight win and continue his successful Round of 16.

Brad Keselowski and Kevin Harvick started on the pole for the race; it was Keselowski’s first pole at Richmond since 2014. Truex, who won the Richmond race in April for his first Cup short track triumph, qualified eighth.

Keselowski quickly built a strong lead over the field as Truex battled with Busch for fifth. By lap 25, playoff drivers comprised all but three positions in the top fifteen, including first through ninth with Jimmie Johnson in tenth. Denny Hamlin took second from Harvick on lap 29.

As the stage progressed, Keselowski began encountering lapped traffic as Truex closed in on Hamlin, clearing him on lap 46. Truex caught Keselowski and passed him for the lead on lap 54, from which his advantage rapidly increased. By lap 83, Truex led Keselowski by over five seconds; Busch would take second from Keselowski two laps later.

Busch and Truex occupied the front row for the start of Stage #2. On lap 111, Alex Bowman was clipped by Austin Dillon, sending the former into a spin. Bowman, who fell down a lap and behind his fellow playoff contenders, voiced his frustration with the #3 over the radio:

Keselowski, Kurt Busch, and Ryan Blaney pitted under caution. The race resumed on lap 118 with Busch at the helm.

By lap 170, the entire top ten was dominated by playoff drivers as Busch continued to maintain his lead over Truex. Hamlin ran third, followed by Harvick, Jones, Keselowski, Ryan Newman, Elliott, Bowyer, and Kyle Larson. For Bowman, who was outside the top twenty, contact with Darrell Wallace Jr. dropped him another lap after being passed by Busch.

Although Truex closed on Busch in the wave of lapped cars, the latter held the top spot en route to the stage win. Behind the two were Hamlin, Jones, Keselowski, Newman, Harvick, Elliott, Bowyer, and Johnson. Johnson, who missed the playoffs for the first time since the postseason’s introduction in 2004, was once again the lone non-playoff driver to receive stage points.

Like the previous segment, Stage #3 commenced on lap 212 with Busch and Truex holding the top two positions. Keselowski was sandwiched between JGR cars with Hamlin and Jones in third and fifth, respectively. Three laps later, Newman passed Jones to take his spot.

Busch kept his margin until Reed Sorenson hit the wall on lap 242 to bring out the caution. Keselowski and Truex led the grid to the lap 252 restart, with the former leading until lap 282. Busch would also pass Keselowski for the runner-up position six laps later.

Green-flag pit stops began on lap 312. Four laps later, Truex was spun by Ricky Stenhouse Jr. to force another yellow flag. Busch took the lead as a result, but Truex was able to remain in the top five in third, with Hamlin between his JGR allies. The race resumed on lap 322.

Two laps into the restart, Busch’s advantage over Hamlin had grown to over half a second. By lap 344, it had ballooned to one second. Truex claimed second from Hamlin on lap 356.

Truex was successful in chasing down Busch, taking the lead with 25 laps remaining. As his lead increased to over two seconds, Truex stormed off for his sixth win of 2019. Busch finished second, with Hamlin and Jones third and fourth to complete a JGR sweep of the top four.

Busch and Harvick, who finished eighth, clinched spots in the Round of 12 on points.

UPDATE: Jones has been disqualified after failing post-race inspection. With his fourth-place run now nullified, he faces a must-win situation entering the Round of 16 finale at the Charlotte Motor Speedway Roval.

By Justin Nguyen
2 Mins read
Due to NASCAR wanting driver Tarso Marques to get Xfinity Series experience before débuting in the Cup Series, Team Stange Racing has pushed its maiden start from this weekend’s Road America race to Watkins Glen in August.
NASCAR Cup Series