Power cruises to his second win of the year at Portland 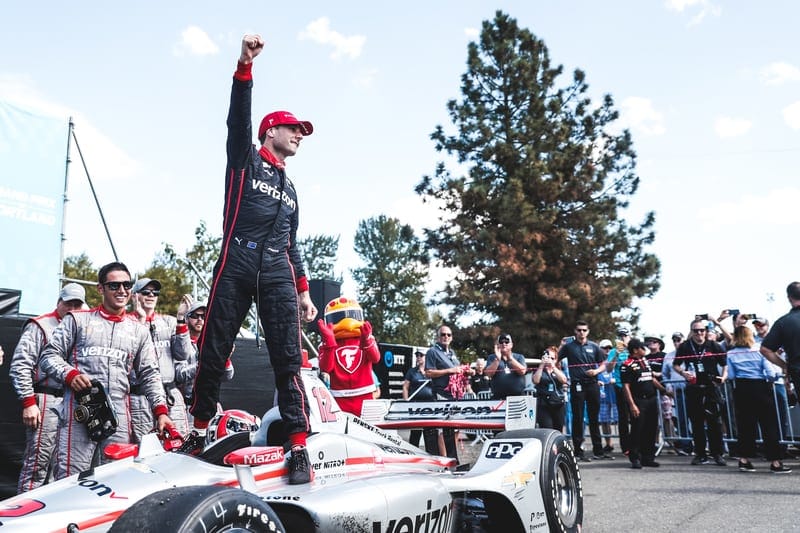 Will Power has taken his second victory of the 2019 NTT IndyCar Series in the Grand Prix of Portland at Portland International Raceway. The Team Penske driver took over the lead from Scott Dixon shortly after the halfway point and never looked like he was going to lose it from then on. A late caution threatened to throw a spanner in the works, but Power would win by almost three seconds ahead of Felix Rosenqvist, with championship contender Alexander Rossi completing the podium.

The start of the 105-lap race at Portland was unquestionably a messy one. Graham Rahal triggered a multi-car pile-up after attempting an ambitious move at turn one, which led to a lengthy caution period. Four cars, including Rahal, were eliminated on the spot, with several others being hampered by damage but able to continue.

The race would go back under caution shortly thereafter following a mistake made by Ryan Hunter-Reay. The Andretti Autosport driver was being surprisingly aggressive in his defence on championship-contending team-mate, Alexander Rossi, on the run down into turn one. Hunter-Reay appeared to be caught out in his defence and went way too deep into the corner; collecting Meyer Shank Racing‘s Jack Harvey who would sarcastically applaud Hunter-Reay from the cockpit of his stricken #60 Honda. Hunter-Reay would return to the race later on after repairs, but Harvey would be forced to retire.

Following the two early cautions, the race settled down into a good rhythm. Pole-sitter Colton Herta led the early stages of the race, but he would have Scott Dixon right on his gearbox for the entire first stint. As the first pit-stops drew near, Herta’s tyres really started to cry for mercy. On lap thirty-seven, they cried enough. Dixon would take the lead at the end of the backstraight, with both Power and Rossi also passing the rookie on the main straight shortly thereafter.

Rosenqvist would soon push Herta down into fifth place, with Colton being asked by his Harding Steinbrenner Racing crew to stay out for as long as possible to give themselves strategic options later in the race. Colton finally pitted at the end of lap thirty-nine, with the rest of the race leaders staying out a few laps longer before making their first stops.

Dixon’s pass on Herta allowed him to stretch out a decent advantage over the rest of the contenders. He had a three-second lead over Penske’s Will Power and was looking to try and finish strongly to help his quest to defend his championship crown. However, just after the halfway point, Dixon’s car would suddenly cut-out, forcing the Chip Ganassi Racing driver to coast down the pit-lane to his crew. The team replaced the battery on his #9 Honda and would send him back out, but he was now three laps down on the race-leaders and his championship rivals.

Following Dixon’s issues, Penske’s Will Power would take over as the race-leader. From there, it looked as though his victory was never in any doubt. He and the #12 Penske crew successfully held on to the lead in the final pit-stop sequence shortly after lap seventy, with Will pulling out a lead of three-seconds on second-place Felix Rosenqvist and a further ten second lead back to third-placed Alexander Rossi.

However, just when it seemed as though Power was on course to cruise to victory, a potential curve-ball was thrown. Dale Coyne Racing‘s Santino Ferrucci suddenly slowed out of the final corner, with the rookie coming to a halt halfway down the main straight. This would bring out a caution with just eight laps remaining in the race, with the leaders taking the restart for the final time with twenty-five lap old tyres and only four laps left to run.

Determined not to give anyone a chance at stealing his lead, Power made a great getaway and soon found himself out of range from an attack by Rosenqvist. Will would pull out a lead of one second in just one lap and would go on to extend the gap to almost three seconds by the time the chequered flag would fly at the end of lap-105.

In the end, Will Power would cross the line to take victory for the second time in 2019. The last few weeks have been a rollercoaster for Power, who took his long-awaited first win of the season back at Pocono Raceway in a rain-shortened race, before retiring early on at the last race at Gateway Motorsports Park last weekend.

Today’s victory – his thirty-seventh in the NTT IndyCar Series – was not only redemption for his retirement last weekend, but it was also redemption for his ill-fated race at Portland twelve months ago, when a car issue prevented him from winning from pole position. Power’s two victories have not been enough to see him get back into contention for this year’s title, but he will continue to push hard heading into the final race of the season in three weeks time at WeatherTech Raceway Laguna Seca to try and build momentum heading into 2020.

Chip Ganassi Racing’s rookie, Felix Rosenqvist, would take his second successive second-place finish on a road course, backing up his last runner-up finish at Mid-Ohio three races ago. It was a measured drive from the Swedish driver after qualifying in fifth, but the #10 Honda just did not look quite as fast as Power in the closing laps. Nevertheless, Rosenqvist now holds a comfortable lead in the rookie of the year standings heading into the final round, retaking the lead after Santino Ferrucci retired late-on.

The final spot on the podium would go the way of championship-contender Alexander Rossi. Rossi spent much of the closing stages of the race with pressure from behind from pole-sitter Colton Herta. However, Andretti Autosport would ask Harding Steinbrenner Racing – an affiliate team of there’s – to request that Colton be “a good team-mate.” Herta would obey and would follow Rossi home to take fourth place.

Championship-leader Josef Newgarden came back from his poor grid position of thirteenth to take a strong fifth-place finish. Josef avoided the carnage of the opening few laps and went on to slowly but surely work his way up into the top-five. As a result, he will enter the final round of the season later this month with a forty-one point lead over Alexander Rossi and a forty-two point lead over Simon Pagenaud. Either Rossi or Pagenaud can still win the title should either of them win at Laguna Seca with Newgarden finishing sixth or lower. Everything is still to play for in the 2019 championship fight.

For the second year in succession, Ed Carpenter Racing‘s Spencer Pigot put on a great display at Portland. Despite getting some damage in the lap one melee, Pigot drove through the order to take a superb sixth place finish, just ahead of championship-contender Simon Pagenaud in seventh place.

A.J. Foyt Enterprises driver, Matheus Leist, took a solid eighth-place finish after driving a clean race despite the early chaos. Dale Coyne Racing’s Sebastien Bourdais finished in ninth-place despite a lengthy pit-stop early on after fuel issues. Carlin‘s Charlie Kimball completed the top ten, with his team-mate, Max Chilton taking his best finish of the season so far after finishing in eleventh place; albeit one lap down on the leaders.

Further back, Marco Andretti had been on course for a solid top ten finish, but an altercation with Simon Pagenaud saw the American sustain front-wing damage. He would be forced to make an extra pit-stop for repairs and would ultimately finish one lap down in thirteenth-place.

After leading well for the first half of the race, Scott Dixon would ultimately come home in sixteenth-place, three laps down on the race leaders. Dixon had been tracking to be within fifty-points of the championship leader when he was running at the front, but as a result of the issues, he now sits eighty-five points adrift and hoping for miracles at the season-finale to have a shot at retaining his championship crown.

Seven cars were classified as non-finishers at the end of the race. Santino Ferrucci led the list of retirements after his car stopped in the last ten laps. Ryan Hunter-Reay briefly returned to the track after his incident with Jack Harvey early on in the race, but he would return to the pits and would be classified in eighteenth-place, twenty-four laps down. Jack Harvey was classified just behind in nineteenth after not being able to return to the track.

The final four drivers were all eliminated in the opening lap pile-up. Both Arrow Schmidt Peterson drivers had their races ended right at the start, with James Hinchcliffe and Conor Daly both criticising Graham Rahal for causing the incident on the very first lap of what was a long race. Daly, in particular, was frustrated to have had his race ended early as he continues to try and showcase himself to potential employers for 2020.

Andretti’s Zach Veach also was eliminated on the opening lap. He was classified in twenty-second place, just ahead of the cause of the pile-up, Graham Rahal, in last-place.