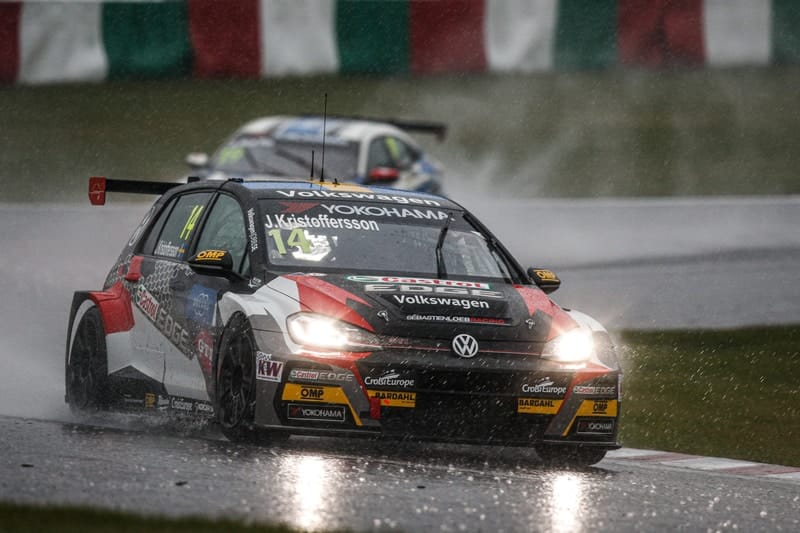 Although still not dry, the World Touring Car Cup competitors were treated to slightly better levels of grip and visibility in the second round of practice at Suzuka.

Thed Bjork, the man who propped up the time sheets in the earlier session, was the early pace-setter after the first five minutes had elapsed.

In comparison to free practice one, everything had been going rather smoothly. So, to spice things up, Mikel Azcona gave us a brilliant display of car control through the opening set of corners. Having lost the rear end, the Spaniard executed a perfect two-second drift before regaining rear grip and powering onto the next curve.

Rob Huff then went fastest of all with around ten minutes to go, just before the red flag was deployed for the second time today. Having just left the pit lane, Ma Qing Hua’s left-rear wheel parted company with the rest of his car, leaving the Alfa Romeo stranded on the circuit.

Eventually, the car was recovered, giving everyone else ten more minutes of crucial track time… or so we thought.

Johan Kristoffersson ran off at turn two, and as he was recovering, Frederic Vervisch backed into the same gravel trap at high speed. The cars narrowly missed each other, but as the Audi was stuck in place, the session had to be halted once again.

Remarkably, despite the tightly-packed timetable, the circuit officials decided to restart proceedings for a second time, this time with just over seven minutes left to run.

It proved worthwhile for Kristoffersson though. The former rallycross world champion made use of his experience in adverse conditions, and shot to the top of the time sheets ahead of Volkswagen team-mate Huff.

That’s how the order would remain until the chequered flag was waved, with Kristoffersson just over a tenth of a second quicker than Huff. Volkswagen topped and tailed the field however, as Benjamin Leuchter and Mehdi Bennani could only manage 26th and 27th respectively.

Bjork made it two Swedes in the top three after a much more promising session compared to his earlier travails in free practice one, while Frederic Vervisch continued to look strong after securing fourth this time out.

Championship contender Esteban Guerrieri was the best Honda driver in fifth, although Tiago Monteiro was only three thousandths of a second slower in his Civic.

The fastest man in free practice one, Niels Langeveld, could only manage seventh this time, but the Dutchman is showing much better pace than he has done for the majority of this year.

20 year-old wildcard Ritomo Miyata continued to impress in eighth, while his team-mate Ryuichiro Tomita was also running well in eleventh. Sandwiched in between the two Team Hitotsuyama cars, Mikel Azcona and Andy Priaulx rounded out the top ten.

One of the biggest stories to come out of this session though was the apparent lack of pace amongst the Hyundai contenders. Gabriele Tarquini was the best of them in thirteenth, but championship points leader Norbert Michelisz will be at least mildly concerned with his lap time that was only good enough for eighteenth in the standings.