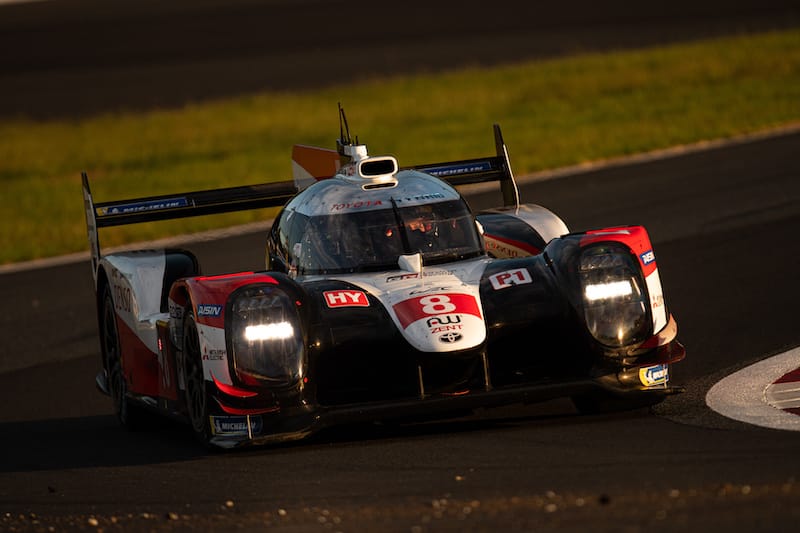 Despite the FIA World Endurance Championship‘s new Success Ballast, Toyota Gazoo Racing are still leading the charge at the second round of the 2019/20 season. The #8 in the hands of Brendon Hartley, Sebastien Buemi and Kazuki Nakajima has remained unbeaten so far this weekend, topping all three practice sessions.

It was a shock for teams and media alike to discover on Friday that the correction factor for the LMP1 Success Ballast had moved from the confirmed 0.008 seconds per lap, that was announced at Silverstone, to 0.012 seconds per lap. This massively increased Toyota’s deficit on the field, especially for the #7 championship-leading car, which now suffers around 1.4 seconds rather than the previously predicted 0.9 seconds.

Kamui Kobayashi has been greatly outspoken about the Success Ballast, claiming that the massive per lap penalty the #7 crew will suffer this weekend has been very ‘demotivating’. He claims that, although the penalty is 0.4 seconds on paper, it is translating to nearer 0.8s per lap they are losing to the sister car, making it impossible to challenge the #8 at the team’s home race.

It also looks like the Success Ballast has brought them into the hands of Rebellion Racing who, now down to one car, have been hot on the heels of the #7 throughout practice. On Friday, the #7 could not finish faster than the Swiss team, meaning that Rebellion locked in two second place finishes on the timing board. It remains to be seen whether they can convert this over to qualifying or race pace, but it does look promising.

At this point, it seems that the Success Ballast is doing well in bringing the Toyotas into the hands of the Privateers, but the #8 still has an advantage that seems untouchable by the rest of the field.

Team LNT are sitting about an average of 1.5 seconds off the pace, and it seems like this will be another weekend where they will pick up a podium if there are issues for either of the three cars ahead of them. They showed good reliability in Silverstone when the Rebellion did not, so it could be another instance of this for the Ginetta-powered team if Rebellion hit any more troubles.

The top five in LMP2 have been covered by a second, until this morning’s final practice session where it was 1.2 seconds. This shows for a predicted close shootout later on in qualifying.

The current favourite is Racing Team Nederland who have topped two of the three timing sheets competitively. They will be hoping to qualify well to try and repeat their performance in Silverstone and protect from a potential safety car. All LMP2 teams have to consider their driver paces throughout the race and strategically plan who will be in the car when. These decisions could make or break a race for a team.

Four cars show potential to put the pressure on the Dutch crew for pole position later on, with the #38 JOTA Sport the only other car to top a timesheet. The #42 Cool Racing, #37 Jackie Chan DC Racing and #22 United Autosports will all be cars to watch come qualifying in a few hours.

Porsche GT Team have been setting the pace in GTE Pro, with the 1:37.501 set by Gianmaria Bruni and Richard Lietz this morning in final practice being the best time set by the Pro cars. AF Corse looked to be the team that was going to challenge Porsche this weekend, but the advantage has shifted to Aston Martin Racing who were just a few tenths off the benchmark time with their fastest cars in Free Practice Two and Three.

It looks at the moment like Porsche will have what it takes to secure pole position in class, but the pace of the other cars is not far off, so we should have a fight on our hands come Sunday.

The #90 TF Sport was looking very strong at the end of Friday, and was certainly the favourite to take pole position in GTE Am, but in this morning’s practice session it dropped down the field, leaving the Dempsey-Proton Racing Porsche #88 to take the fastest lap.