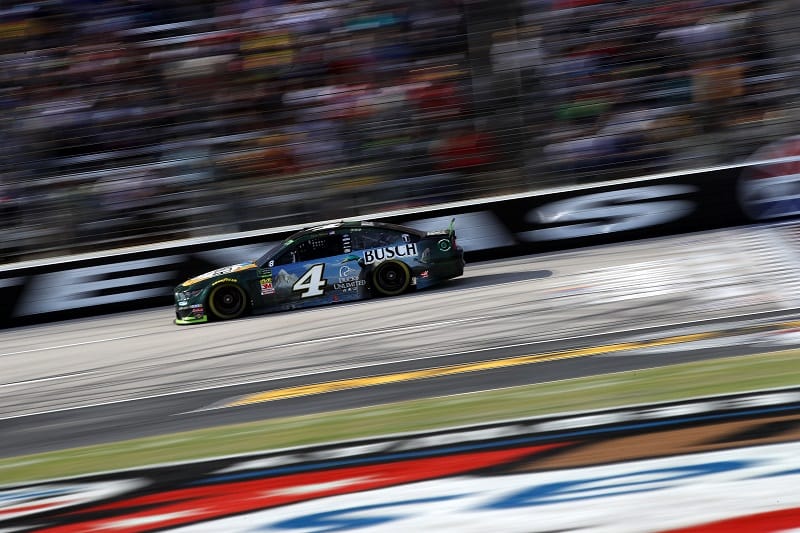 The 2019 Monster Energy Cup Series playoffs’ Round of 8 did a Texas two-step en route to Texas Motor Speedway for the AAA Texas 500. In a race dominated by the Blue Oval, Kevin Harvick led a contingent of Ford Mustangs to the checkered flag to punch his ticket to the Championship Round.

Harvick (pole) and Denny Hamlin (third) were the lone playoff drivers starting in the top ten. It was Harvick’s series-leading sixth pole of the year, while Erik Jones enjoyed his best starting position of the year. John Hunter Nemechek, making his Cup début in relief duty for Matt Tifft, qualified twenty-ninth in the Front Row Motorsports car. His father Joe Nemechek was thirty-eighth; the AAA Texas 500 is the first Cup race since 2005 to feature a father and son duo racing against each other.

The opening stage was plagued by cautions. Chase Elliott‘s title hopes were quickly put in jeopardy when he hit the wall on lap nine, knocking him off the pace and multiple laps down. A second caution occurred on lap 14 when debris from a turn marker fell onto the track.

At the front, Harvick dominated the early portion of the race with his Stewart-Haas Racing team-mates Aric Almirola and Daniel Suárez in tow. On lap 43, Corey LaJoie hit the turn four wall. Jones led the field to the lap 47 restart before Clint Bowyer took the lead two laps later.

On lap 54, Brad Keselowski spun and hit the wall entering the tri-oval, with Ricky Stenhouse Jr. unable to avoid him. Another caution occurred for LaJoie hitting the wall in turn four yet again, followed by Denny Hamlin spinning into the frontstretch grass lap 81.

Bowman and Johnson paced the field to the start of the second stage. The two Hendrick Motorsports team-mates battled for the lead, with Johnson receiving a push from Almirola to take the lead on lap 99. Forty laps later, Almirola passed Johnson for first.

After five laps in front, Almirola pitted for fuel as part of the fuel cycle. Suárez, William Byron, Harvick, and both Busch brothers spent time in front before they went to pit road, which shuffled Almirola back on top.

Suárez won the race off pit road to lead the grid back to the restart alongside Byron.

On lap 185, Johnson spun while running in third and hit the outside wall for the yellow. Green-flag racing quickly ended after the restart when David Ragan and Garrett Smithley wrecked in turn two, an incident that Ragan tweeted was him being “caught up in someone else’s mess” after having to “start in the back with the squirrels.”

During the ensuing yellow, Harvick received a penalty for having equipment over the wall.

The race resumed on lap 198 with Suárez leading. On lap 238, the next green-flag pit cycle opened, with Almirola pitting four laps later. Meanwhile, Darrell Wallace Jr. spun after his left-rear tyre went down. The green flag waved on lap 248 with Almirola in front.

After a brief battle, Harvick passed Almirola for first on lap 256.

As the race crossed the 300-lap counter, various drivers began pitting for fuel, with Harvick doing so on lap 308. Ky. Busch inherited the lead before pitting on lap 313, shuffling Harvick back on top; Busch’s car stalled during his stop, causing him to sink in position.

Harvick did not give up the lead for the rest of the race, leading SHR allies Almirola and Suárez, plus fellow Ford driver Logano to his fourth win of 2019. SHR’s stable – Harvick, Almirola, Suárez, and Bowyer – led a combined 242 of 334 laps, all of them also having the top four most laps led by driver.

The 2014 champion, Harvick joins Martin Truex Jr. in the final round. Since the elimination format’s introduction that year, the California native has been part of the Championship Four every year outside of 2016.