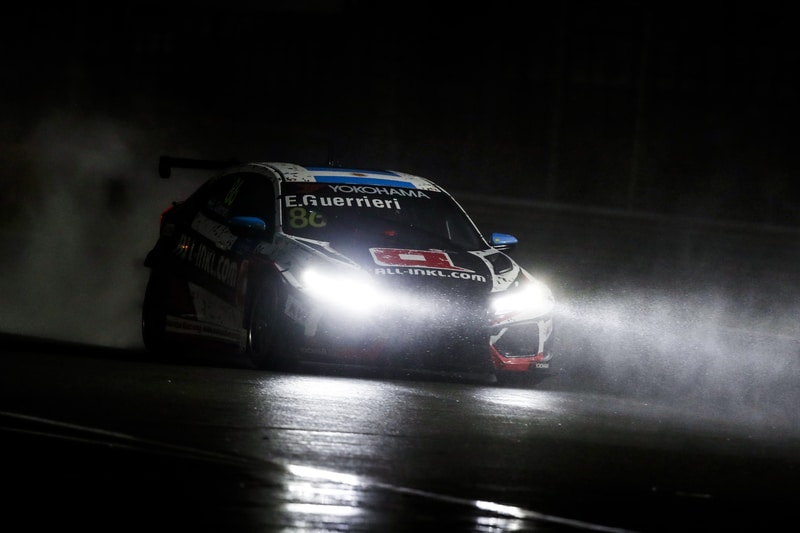 Esteban Guerrieri won the second World Touring Car Cup race of the weekend at Sepang, after a storming drive from ninth to first, and almost an hour’s delay caused by red flags.

The chaos began in this race before it had even got underway. Frederic Vervisch‘s team bizarrely left his car on the grid minus a front-left wheel after having discovered a driveshaft issue with his Audi RS3. His car had to be wheeled away from third place, effectively ending any hopes of Audi claiming a good result in their final event as a factory presence in the WTCR.

The conditions on the circuit had worsened considerably since the last race. As a result, Thed Bjork dived into the pit lane after the warm-up lap to swap onto a full set of wet tyres, as did Malaysian wildcard, Mitchell Cheah. With plenty of spray and standing water on the track, they were surprisingly the only two to do so of those who had started with a partially slick set-up.

As the lights went out, Ma Qing Hua led from pole position, but Nestor Girolami was braver on the brakes into turn one. Esteban Guerrieri also had a great start in the other Munnich Motorsport Honda. The Argentine dived to the inside of his Hyundai rivals, and slight contact caused a ripple effect through the pack which sent Gabriele Tarquini into the side of Attila Tassi.

Norbert Michelisz, meanwhile, was sinking rapidly through the order, and before anyone could catch their breath, Guerrieri had made his way up into second place by turn eight. With only his team-mate left in front of him, the lead of the race was almost inevitably heading Guerrieri’s way. And that’s not all. Through the thick spray, Michelisz was unsighted into turn nine, and had to take avoiding action into the gravel trap to avoid an accident between his own team-mate Nicky Catsburg and Cyan Racing’s Yvan Muller. Within the space of a lap, it looked as though Michelisz’s 27-point advantage might be about to be whittled down to almost nothing.

As Catsburg and Michelisz crawled back onto the circuit from the wet grass, Hyundai’s luck went from bad to worse as Catsburg’s car burst into flames. Naturally, the race was suspended as the Hyundai BRC Racing team watched their comfortable cushion in the drivers’ championship standings go up in smoke. As it stood there was now just two points between Michelisz and Guerrieri.

After almost an hour, and after much confusion, the race was then set to get back underway with the grid order finally decided by the order taken from sector two on the first lap; the last timing update before the red flags were waved.

So, as darkness well and truly set in, the safety car led everyone around with Girolami and Guerrieri leading, Muller not far behind in fifth and Michelisz way down in thirteenth. At last, as the cars headed onto lap four, the race finally resumed.

Guerrieri wasted no time in launching an attack on his team-mate for the lead of the race, and as predicted Girolami didn’t put up too much of a fight. Mikel Azcona and Kevin Ceccon ran close behind in third and fourth, while Augusto Farfus made a move on Yvan Muller for fifth at turn two. Neither of them got a great exit as a result, and so Johan Kristoffersson capitalised in his Volkswagen. The Swede got by Farfus, but didn’t quite have enough grip to take Muller too.

By the half way point in this race, Michelisz had regrouped and was now making his way back up the order. First getting by the Honda of Tiago Monteiro, he was then let through by Hyundai stablemate Augusto Farfus, and finally made a third move on Rob Huff at turn eleven. By the end of lap five, the Hungarian was now up to eighth place.

Yvan Muller, meanwhile, remained in fifth, but would have to reach higher than that to keep his championship hopes alive. However, Johan Kristoffersson clearly hadn’t read that script, and instead demoted the Frenchman down to sixth after completing a move on entry to turn one as the cars started lap six.

Out in front meanwhile, Esteban Guerrieri was running away with a comfortable lead while Nestor Girolami held off the charging pack. The most aggressive of that pack though, seemed to be Johan Kristoffersson. Yet to have a drive confirmed for next year, the reigning World Rallycross Champion was putting on a masterful display in truly shocking weather conditions. After setting himself up nicely at the final corner, Kristoffersson managed to get by Kevin Ceccon at turn one despite the Alfa Romeo’s significant speed advantage along the start-finish straight.

Fed up of being stuck behind Girolami, Mikel Azcona then sent his Cupra around the outside of the Honda at turn five; one of the most committed corners on the circuit. Somehow he found the grip to pull off the overtake, but Girolami came back at him through the following sequence of corners. Azcona stuck to his guns though, and after narrowly avoiding a tyre stack, forced his way back onto the racing line, ahead of Girolami on the run down to turn nine.

Kristoffersson then made a lunge down the inside of Girolami at the final corner. The Swede drifted wide, allowing Girolami to get back past on the inside, but superior traction off the exit of the turn meant that Kristoffersson could challenge Girolami in a drag race along the start-finish straight. The Argentine had the inside line though, so the Swede would have to concede defeat this time around. Kristoffersson didn’t have to wait long for another opportunity though. By getting better traction off of turn four, the Volkswagen driver was able to finally come out on top.

With two laps to go, the safety car was sent out after Attila Tassi’s Honda came to a stop in an unsafe area. His car was swiftly pulled out of the way, but despite that, the race was concluded under safety car conditions.

So, Esteban Guerrieri took victory, making it one apiece for the two remaining title contenders this weekend. Mikel Azcona and Johan Kristoffersson finished the race in second and third place respectively; the Swede having charged his way up from 22nd on the grid to make the podium. Yvan Muller, meanwhile, was sixth across the line, but as Norbert Michelisz came home in eighth, the Frenchman’s title hopes were now mathematically over.

With just one race left to go, it comes down to Norbert Michelisz and Hyundai vs Esteban Guerrieri and Honda, with a gap of just ten points separating the two drivers in the standings. On the plus side for Lynk & Co Cyan Racing, they still lead the teams’ championship standings, and can now only be beaten by BRC Hyundai N Squadra Corse.