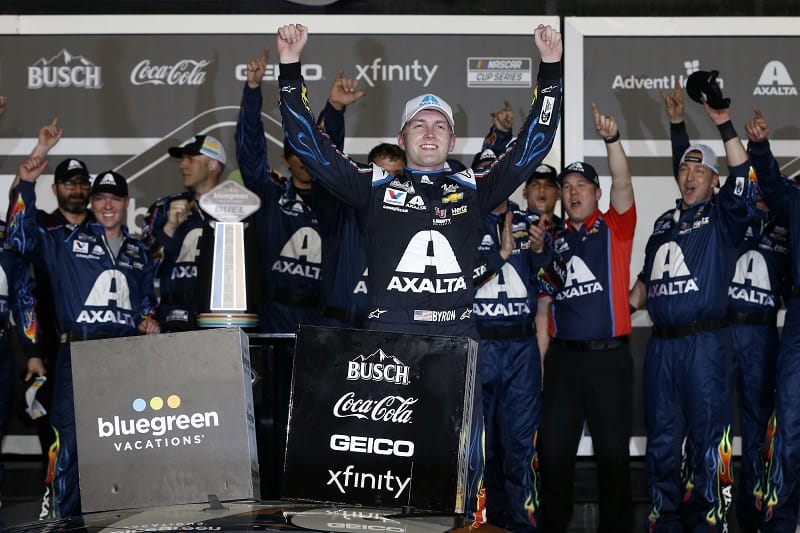 To determine the Daytona 500 starting grid, drivers qualify on speed on Sunday or race their way through the Bluegreen Vacations Duel on Thursday. The latter saw Joey Logano and William Byron clinch spots in the second row for the 500 with victories in the two qualifying races.

With their front row qualifying efforts on Sunday, Ricky Stenhouse Jr. and Alex Bowman started on the pole for the two Duels. For seven non-chartered open cars, they were scattered across the qualifying races and had to race into the 500. By the end of Thursday, Justin Haley, Reed Sorenson, Brendan Gaughan, and Timmy Hill locked their places in the Great American Race.

The first Duel featured four open drivers. Justin Haley, running his and Kaulig Racing‘s first 500, qualified for the race on his qualifying time, forcing Reed Sorenson, Daniel Suárez, and Chad Finchum to duke it out.

After rain forced a delay, the race began with Stenhouse leading the field.

The Chevrolet camp conducted their stops on lap 23, followed by the Toyotas a lap later. On pit road, Christopher Bell collided with fellow Toyota/Joe Gibbs Racing family member Martin Truex Jr. when the latter attempted to slow down after missing his pit box.

On lap 30, Suárez’s Daytona 500 hopes came to an end when he made contact with Blaney, sending him into the outside wall in the tri-oval. Suarez, who joined Gaunt Brothers Racing for 2020, attempted to dodge Blaney’s Team Penske team-mate Brad Keselowski as he prepared to pit, a situation triggered by a miscommunication between the Penske crew chiefs. The crash forced Blaney into a backup car for the 500.

The race resumed on lap 37 as Logano took the lead. As he battled with Stenhouse, the leaders lapped Sorenson, though he remained in qualifying position as Finchum was two laps down.

With a push from fellow Ford Aric Almirola, Logano held off Ryan Newman and Stenhouse for his second consecutive Duel victory. Almirola, Newman, and Keselowski finished second through fourth to complete a Ford sweep of the top four positions. Haley and Sorenson qualified for the race with their finishes while Suárez and Finchum were sent home.

“I hope I don’t give him an assist on Sunday,” Almirola quipped in an interview with Fox Sports. “[…] Solid night for all the Fords. I was pretty committed to Joey, our cars lined up pretty well.”

“It’s a huge deal,” Sorenson said; he will run his first Daytona 500 since 2016. “Just proud of all the guys at Premium Motorsports for putting this together. […] This kinda gets the ball rolling together for a small team like this.”

Twenty-one drivers comprised the Duel #2 field, with Gaughan, J.J. Yeley, and Hill as the open cars. Gaughan qualified on speed, leaving Hill and Yeley as the other contenders for the final spot on the grid.

Although Bowman started on the pole, it didn’t take long for the Ford duo of Kevin Harvick and Matt DiBenedetto to pull ahead. By lap 15, Bowman and the outside line, receiving a push from Busch Clash winner Erik Jones, moved to the front. As the top groove gained momentum, the leaders on the inside moved outside.

Like in the first Duel, the Chevrolets pitted on lap 23, cycling Jones to the lead. Kyle Busch led the Toyotas and Fords onto pit road on lap 33. Hill and Yeley, who were battling for ninth when the latter wave of stops took place, pitted together. Once the stops concluded, Harvick retook the lead.

On lap 42, Yeley was clipped by Corey LaJoie on the backstretch, sending the former into the wall and ending his 500 prospects. As a result, Hill qualified for his first career 500.

Lap 48 saw the restart as Harvick led upon receiving a push from DiBenedetto. A brief attempt to block Busch on the outside line prompted Harvick to jump back inside. David Ragan, racing his first event since his retirement from full-time competition, drafted Busch along the top, though the two lost their ground on Harvick by lap 50.

With the outside line out of the picture and Busch falling to tenth, Harvick and the leaders ran single file along the bottom.

With three laps remaining, the Chevrolets led by Byron made their move on the outside. Receiving support from Kurt Busch, Byron drove to the lead as Harvick dropped to fourth. Hendrick Motorsports team-mate Jimmie Johnson helped Byron in the draft as they moved outside again, which allowed Harvick to briefly catch up before falling again when he made contact with Busch on the backstretch.

Byron stormed off to take the Duel win ahead of Johnson, his first qualifying race victory. Kyle Larson finished third to ensure a Chevrolet sweep of the hypothetical podium positions.

“There wasn’t any Chevy orders,” Byron said in Victory Lane. “Kurt was a great pusher and a great helper. […] Just made it there, got to second, and Kevin played really nice and didn’t pull big blocks.”

“When they’re coming that fast, it’s just putting up a lot of risk to block,” Harvick said in response to Byron’s remark.