Reece Barr Blog: My journey to date in the world of Motorsport 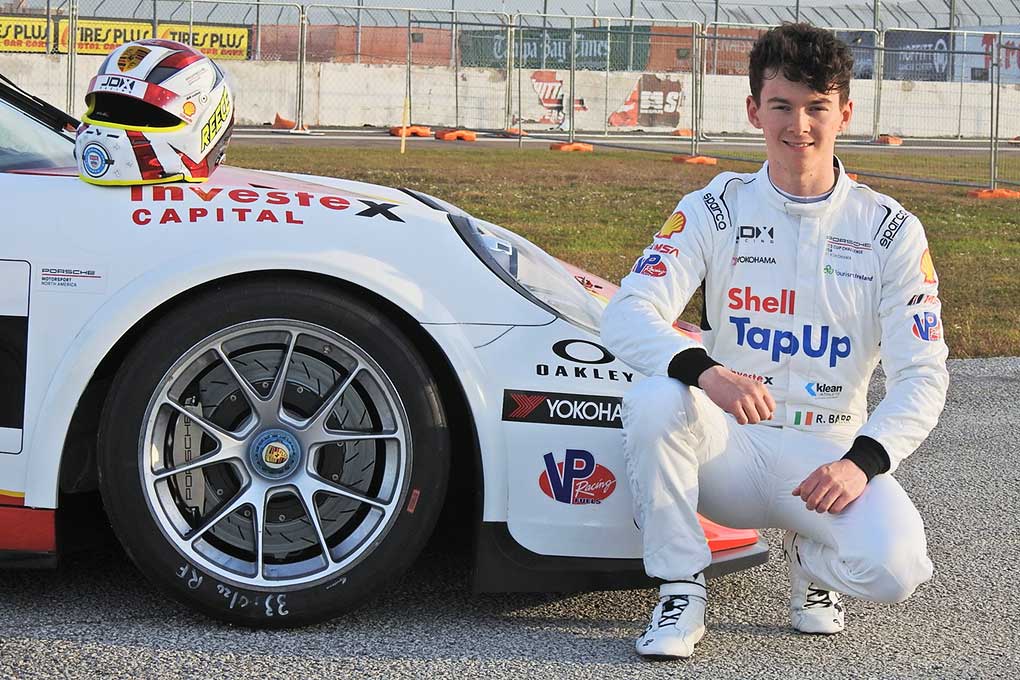 Being my first blog, I would like to walk you through my career so far and what I have experienced and learned in such a competitive sport not just on-track but off-track and the latest over recent months.

My name is Reece Barr I am 19 and I am an Irish Racing driver and a BRDC Rising Star currently set to race in Porsche GT3 Cup Challenge USA with JDX Racing as part of the IMSA programme.

My journey started in 2011 in national karting back home in Ireland, progressing through the categories over three years to Super One in the UK.

So, I spent a year out of racing to get a feeling of the different paths in Motorsport, this comprised of testing the MSA British F4, BRDC F3, Porsche Cup GT3 and lastly the Mini Challenge JCW. The F4 and F3 where amazing race cars and were a great experience to have driven them both with a proper feel for Aero but the Mini JCW Touring car really stood out for me. The JCW was really fun to drive, very rugged style and knowing the style of racing in Tin-Tops notoriously being more aggressive and bumper-to-bumper I instantly felt the thrill of Touring Cars.

This then brought me on a journey through touring cars. The Mini Challenge was a really rewarding year for me, as there was not much expectation, I was in a good position within the team of ExcelR8 and we had a great preparation plan to start the season. This aloud things to take off quickly achieving my first podium and race win in only the second round of the championship at Rockingham raceway. This set the tone for an exciting season with multiple more podiums and rookie wins. To secure the rookie title going into the last round, and to fight with two prior JCW Champions right down to the last laps of the final race of the season with only a few points separating us to hold second overall in my first year felt like true achievement.

TCR fell naturally after my success with Mini, and to get the opportunity to race in the debut season of the European TCR Championship, it was an offer I could not turn down. It was an opportunity for me to learn from some of the best Touring car drivers. I joined Target Competition, which put me in a strong position with Target aligning with Hyundai for the 2018 season. The season kicked off to a great start with a top five finish in my first round, leaving us with high hopes but then BOP which was something very new to me and it was to play a big part in the remainder of the 2018 season for the i30N. Still showing shining moments throughout the year fighting for podiums and consistently in the top ten but was very difficult to extract that last bit that was required from a new car for me and the team.

2019 we made a bold decision, “Porsche GT3” a very different car, championship and path but it is something that painted a very clear picture in terms of a future path and having driven the car in 2016 it made the decision easier to make. I was excited for the challenge and learning curve that was in store to compete against some of the best Porsche drivers in the world and to race such, an iconic and thrilling car was just an awesome feeling. I went into the season knowing the competition was going to be tough, so I took every race, test and session as it came and built my knowledge of the car and racing the Porsche Cup as I knew this was a longer game plan. It was a tough year in my career but was one of the most valuable as it was one of the years that I learnt the most about racing and relationships.

Continuing with Porsche for 2020 on one of my most exciting ventures so far and that is racing in America to compete in the Porsche GT3 Cup Championship. It has been a dream of mine to race states-side and it just feels right that I am now familiar with the car after my season in Germany and with a championship winning team; JDX Racing are very reassuring and I already feel part of their family and to have the support from Byers Porsche and Shell Tap Up it all pieces together very well.

So far preparation for this season is going great with a full SIM program to prepare for the tracks prior to the circuit testing; and working with my Coaches Duarte and Goncalo and my Trainer Danilo on my day to day training program to tailor my entire preparation and knowledge of the Porsche Cup Car with the added elements of racing in the US. I put all of this into practice in the first test of the season, which was the first round of the Championship on the streets of St. Petersburg Florida.

Grand Prix of St. Petersburg weekend and the impending pandemic

Since the first cases diagnosed in China, naively no one seen this as a Global issue but Covid-19 started spreading faster than anyone could have ever anticipated. Once the virus affected Europe in a huge way, it made a statement to the rest of the world. This led to the majority of Countries around the world closing their borders including America just as the virus was reported as a global pandemic.

The Sporting world took a huge hit as did most business and sporting sectors, but with sport attracting many people into one place; events were categorised as high-risk environments. This caused the cancelation of the first round in St. Petersburg 20 mins after Free Practice 1, which was one of many events cancelled around the world that weekend. This was unfortunate as Free Practice 1 gave me a great feeling for the progress that was made over the winter. However, following the cancellation of the Australian GP the day before it seemed like every large sporting event on the planet would follow. Hard to accept after putting in all the work over the winter and my team making such an effort to get everything ready for the season. However, this virus outbreak is much more important than a race as people’s health and safety must always come first. It is very grounding and eye opening how things can just change and how everything can just get turned upside down like it has but it’s now just a waiting game to see how the virus reacts to our global fight back!

Luckily, before the US travel ban was introduced, I made it back to the hills of Donegal, for once the remoteness of Ireland works in my favour. In a way I’ll be honest it’s nice to be able to have some time to reflect and create a plan after getting a small insight into the “First Round” and training full time is very refreshing and after building a home gym to keep things rolling through this extended down period I’m seeing this as an opportunity to try new things and keep progressing. And SIM Racing has definitely been a very big thing over the past few months and I also have a home SIM on its way so that should be interesting to see what it’s all about but it’s definitely a great tool to keep the mind fresh so it’ll be interesting to experiment with online racing.

For now, we wait for the next move, stay safe and be sensible as we await the green flag…

Cheers for reading, until next time!

By Maurice Henry
4 Mins read
Maurice Henry talks about the opening races of the 2022 Ginetta Junior season and the progress he is making up the grid.
FeaturesIndyCar