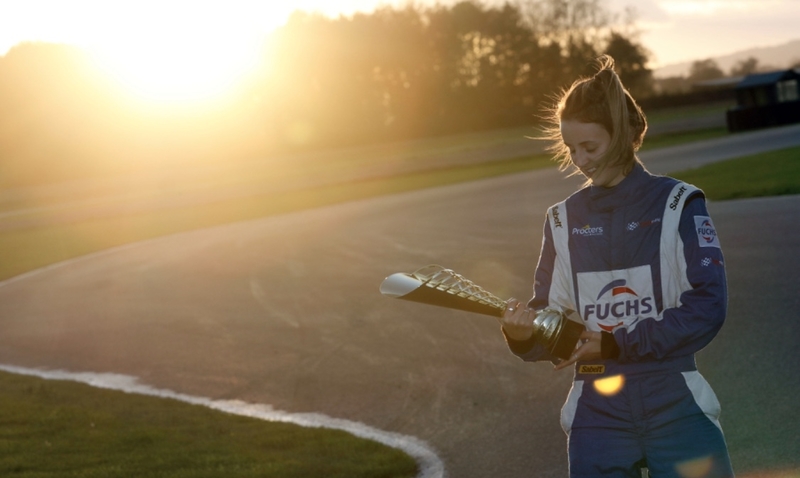 Drew Bellerby, the 2019 BMW Mini Rallycross Champion began her racing career at the tender age of 15, racing quads and motorbikes in local fields. She soon decided to start following in the footsteps of both big sister Paige Bellerby and father Dave Bellerby by diving into the world of rallycross. In 2013 she was given the opportunity to compete in the Suzuki Swift Juniors and has never looked back.

The Checkered Flag caught up with Bellerby to find out how she has been getting on since winning the title. “I don’t have any words to describe how I feel to have achieved it. It went down to the last race of the last round and it really wasn’t looking like it was going to be mine.

“I tried so hard all year. It’s actually been the most successful year I have had in rallycross and then when I achieved it, it was a dream come true and I am just looking forward to hopefully defending my title this year”

With the COVID-19 pandemic postponing the 2020 season, Bellerby explains that it has at least given the team plenty of time to work on the vehicles. “Paige’s car has been completely rebuilt and had a new engine and the race bus is being stripped and getting rebuilt at the moment as well. Without lockdown, we wouldn’t have had the time to do it all and it would have been a rush. My car has also had all of its checks and is the next one to be worked on.”

When asked about the work that needs to done, Bellerby explained that she won’t be driving the same car this season.

“I actually sold my championship-winning car a month after winning at Croft. I am now racing in Steve Brown’s ex-car which was run by my team anyway. Steve hired the car for last season so it makes sense for me to jump straight in there as it’s exactly the same all around. Hopefully, it’s as reliable as mine was last year.”

Bellerby has the utmost confidence in her team and with a family heritage like hers, it’s no surprise. “I think I have the strongest team out there. My dad has raced in rallycross for many, many, many years and his driving style is completely different from anybody else’s. He gives me guidance that nobody else ever has done.

“My uncle Kevin Procter has raced in rallycross as well and even the way that dad and uncle Kevin think and race are completely different. Dad always tells me to expect something, he always says that I drive very much like him and the main thing is to be aware of everything that’s going on around you rather than what’s happening in front.”

There are no plans to follow in her sister’s wake and move up to the supernational class just yet, but you never know what opportunities may arise. Currently, Bellerby is happy to continue her career in the BMW Minis.

“I’m settled in the Mini and I feel comfortable in the Mini, I feel like I perform the best in the Mini but, if anything were to open a new door then I would jump in.”

Her big sister Paige is in the British Army and if she ever got posted abroad then her Lotus Exige would be sat there available but would dad Dave get to drive it or would Drew, we can only wait to find out. When asked about if she would get her own supernational class car, Bellerby said it’s all comes down to one thing.

“It is all purely down to budget and the minis are very affordable for running, for both myself and Paige so, for now, we are quite settled with what we are doing. We are fortunate to have both Fuchs and Proctors Coaches continue to be my sponsors for the 2020 season.”

With so much racing blood running throughout the family, The Checkered Flag wanted to know who would win a race if Drew, Paige and Dave all had the same car?

“We were talking about this the other day, Paige said I would perform the best but if she had a bit more practice then she would beat me. My dad has taken my Mini round Lydden Hill on a test day and somebody was timing him and comparing my previous time, I was actually quicker!”

The opening round of the BMW Mini RX Championship is going to be held at the Home of Rallycross, Lydden Hill over the August Bank Holiday (30/31 August) and Bellerby cannot wait to get back in the hot seat racing alongside a much bigger starting grid this year.

“I have been itching to go. I keep saying to dad when can we go testing. I absolutely can’t wait, I love Lydden and I’ve seen that there are 17 minis going to be on the grid so it’s gonna be tough but I cannot wait.”

Just for a bit of fun to end the interview, Bellerby had to choose her favourite British rallycross track and the answer doesn’t come as a surprise for those who have followed her racing career.

“It would probably be Pembury as it’s my most successful circuit that I’ve been on, every time I’ve been at Pembury for the last two years, I’ve been on the podium, that’s both going clockwise and anticlockwise, I don’t mind which way we go round, But that I have achieved the most so it would definitely have to be Pembury.”

O’Donovan Doubles up in Wales

BRX Round 8 – The Making of Champions