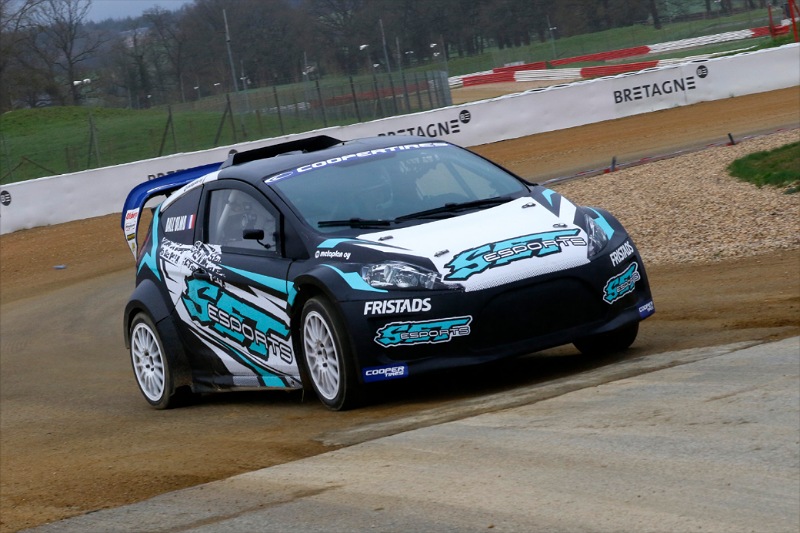 The Finnish rallycross team are multiple champions in real-life and in sim racing, having nine FIA European Rallycross Championship titles in their portfolio including 40 race wins in the Super1600 class and also running the ever succesful GRX Taneco Team in World RX.

SET Esports was created 18 months ago and in their first season in the virtual world, they claimed the iRacing World Rallycross Championship title with the team focusing on drivers with real-life racing experience to take part in the racing.

The French young talent has been active in the Kartcross class of the French Championship, a month after he won his world title, beating over 75,000 entrants in the DiRT Rally 2.0 game, he signed up to join the SET Esports. On same month he joined the team for a test with one of the Supercar Lites machinery at Lohéac.

He was coached by the team owner Jussi Pinomäki and the GRX Taneco Team driver Niclas Grönholm. Dall’Olmo made some runs around the venue and already then he showed he has good pace.

“The day at Loheac was really great. To be honest, it was a dream to be able to meet the team personally, so I was both nervous and happy that I got to work with people like Jussi Pinomaki at the test. The Supercar Lites is the very first real car I have ever driven, I’ve not even driven a road car before, so the feeling of speed and grip, and how good the handling is, was amazing.” Dall’Olmo said.

“The real-world track and the circuit in the game have their differences, so the challenge is quite different too. But, it’s also the same because in the game you learn to be smooth, and I found that was the fastest way in the Supercar Lites too.
It was great to work with Jussi and discuss my driving between the runs, also looking at the data, and I was able to improve the next time in the car.”

“The SET team is very impressive, I have enjoyed being part of it a lot so far and hopefully we can achieve a lot this year. I also now have the goal of racing in real rallycross too.”

In the video you can watch how he made his transition from virtual racing over to real-life with Andrew Coley who guides you in the video.

“Killian is clearly a very talented sim racer, and his results in kartcross prove that he’s good in the real world too. It was exciting to be able to invite him to an amazing circuit like Loheac where we were testing earlier this year to give him the chance to make the switch from driving there on DiRT 2.0 to reality with one of our Supercar Lites. We did the test just before the coronavirus outbreak in Europe, which is when the Esports world has been thrown into the limelight.” Pinomäki said.

“At SET, we have always believed in developing young talent, and our objective of working with young drivers in the sim that have real-world experience continues that, with the aim of giving the them best of our knowledge and experience from both worlds. That also means we have unique potential for opportunities like this, and I was impressed with how quickly Killian was able to adapt to the real-world situations put in front of him at Loheac. It would be very interesting to see him get behind the wheel in a race environment for real.”

By Pontus Lindroos
4 Mins read
Oliver Eriksson won his first RallyX Nordic event of the season at Nysum and has extended his championship lead to 19 points going into today’s final round.
RX2

PREVIEW: RX2 International Series - Nysum: RX2 Looking to Go Out With a Bang

By Pontus Lindroos
3 Mins read
This weekend will see the final ever round of the RX2 International series at Nysum in Denmark.