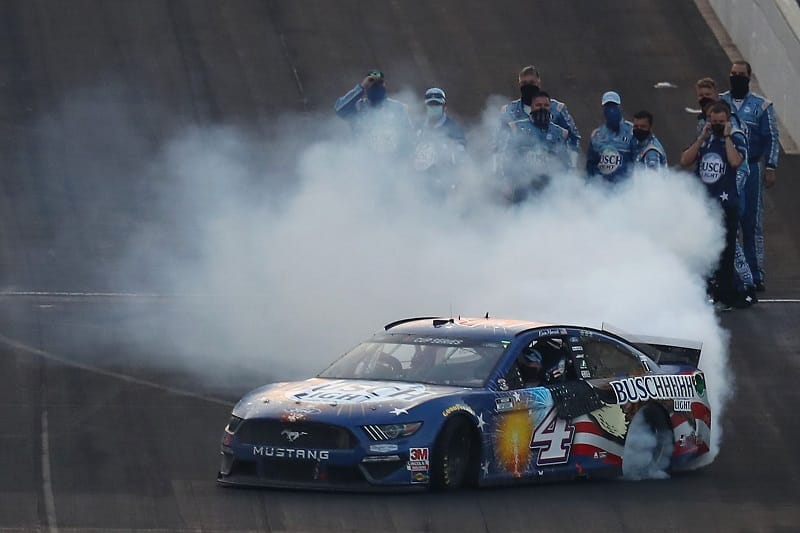 Kevin Harvick enjoyed winning at Indianapolis Motor Speedway in 2019 so much that he returned for a second date with the bricks. In a race plagued by tyre failures that knocked out numerous drivers in hard wrecks, including fellow race and main championship contender Denny Hamlin, Harvick scored his third Brickyard 400 (officially the Big Machine Hand Sanitizer 400) victory and fourth 2020 Cup Series win after holding off Matt Kenseth in overtime.

Joey Logano started on the pole ahead of Kurt Busch, the latter of whom was making his 700th career Cup start. Justin Allgaier and Timmy Hill were sent to the rear for a driver change and failing inspection twice, respectively. Allgaier replaced Jimmie Johnson, who is out with COVID-19, in the #48 Hendrick Motorsports machine for the race, making it the first Cup event without the seven-time champion since the 2001 season finale.

Continuing NASCAR’s trend of bad weather luck, the race was delayed due to lightning strikes in the area.

After an hour of waiting, the race finally got underway as Logano led. Martin Truex Jr., who started eighth, quickly found himself falling due to a spark plug; by lap ten, he was out of the top twenty-five.

“I thought we were gonna have a great day. We ran a lap and a half and it was feeling really good and then the engine went down,” Truex began in an interview with NBC. “[…] We could have easily fixed it and had a really good day, I think.”

Harvick chose to pit before the rest of the field on lap 13, with the competition caution coming out as he neared his pit stall. When the others came to pit road, a pile-up occurred near the entrance that collected Truex, Allgaier, Corey LaJoie, Ryan Preece, and Ricky Stenhouse Jr. Pit road at Indianapolis is the narrowest on the Cup schedule at just 24 feet, with a similar accident also taking place in the previous year’s race that also claimed Truex and Stenhouse.

Blaney was also involved when Brennan Poole bumped into his rear while trying to avoid the stack-up, while Blaney’s rear tyre changer Zach Price was caught between the two cars. Price’s helmet came off as he was pinched by the vehicles, but he was able to withdraw safely and give a thumbs-up as he was being taken to the hospital by ambulance. With LaJoie out of the race, his rear tyre changer Curtis Thompson took over Price’s role; Penske provides crewmen to fellow Ford team Go Fas Racing.

“The #15 [Poole] got into the back of me. I didn’t know if I got the gentleman on the #12 or not,” Allgaier said. “Once the wreck started happening in front of us and we all got bottled up there, one car after another, we’re just getting run into.”

The red flag was waved to facilitate cleanup. Once it was lifted, Truex received a two-lap penalty for having too many crewmen over the wall to repair damage and diagnose the issue; he eventually retired from the race. Allgaier, Stenhouse, and Poole attempted to return to the race, but the damaged proved to be too much for Allgaier as he returned to pit road and exited the event, while Stenhouse and Poole failed to meet minimum speed.

The race resumed on lap 20 with Harvick and Logano on the front row. Although Harvick’s Stewart-Haas Racing ally Aric Almirola ran behind the leaders, he pitted to address a vibration after making contact with Alex Bowman on the restart.

On lap 41, Ryan Newman cut his right-front tyre and hit the wall. During the ensuing caution, Ty Dillon changed two tyres to be the first off pit road, while William Byron and the top five stayed out to assume the lead for the restart with four laps remaining in the stage.

As Byron and Erik Jones pulled away at the green flag and remained in their respective spots, the Dillon brothers Ty and Austin fought with Harvick for third. Receiving a push from Elliott, Austin Dillon claimed third with his drafting partner right behind.

Lap 56 saw the start of ths econd stage as Elliott and Harvick comprised the front row. Receiving a push from DiBenedetto on the outside line, Elliott was able to clear Harvick; the latter lost another spot when Hamlin drafted his way past.

On lap 75, Jones’ right-front tyre went down, causing him to slam into the outside wall in turn three and catch fire. Although Jones was unharmed, it has been a bad weekend to be a JGR driver with the Jones surname; Xfinity Series racer Brandon Jones also had his car go up in flames during Saturday’s race on the Indianapolis road course.

Byron gained nine positions on his stop to be the first out of the pits. However, his day quickly took a turn when the restart took place on lap 83: after Dillon overtook him for the first green-flag lead change of the day, he lost his left-front tyre for the caution.

“Just cannot believe how it’s gone for us when we are running well so far this year,” Byron tweeted. “Unbelievable.”

The tyre attrition raised eyebrows, though it can be attributed to a lack of practice to place rubber on the surface and higher track temperatures; the tyres were also the same combination used at Pocono last week, while the right sides were the same types from the 2019 Indianapolis event. NASCAR’s tyre manufacturer Goodyear tweeted a description of their sets prior to the race.

Another restart commenced on lap 88, during which Harvick executed a daring move to take the lead from Dillon and Hamlin as he squeezed himself between Hamlin and the grass to go three-wide. Moments later, Blaney got loose while racing Keselowski and spun into the outside wall for another yellow.

Harvick went on to take the stage win ahead of Elliott, Hamlin, DiBenedetto, Dillon, Kenseth, Kyle and Kurt Busch, Christopher Bell, and Bowyer.

Harvick and Elliott occupied the top two as the final stage opened, though Daniel Suárez restarted on the inside after staying out.

The stage would be dominated by Harvick and Hamlin. As the event passed the 120-lap mark, green-flag stops began, with Kenseth inheriting the lead after the Harvick/Hamlin pair pitted.

On lap 134, Bowman also fell victim to tyre failure when his right-front went down, sending him into the SAFER barrier. During stops, Kyle Busch returned to pit road for loose lug nuts, while Harvick and Hamlin stayed out to stay on top.

The restart came with 22 laps to go as Hamlin took off. Despite a concerted effort by Kenseth to get past Harvick, the latter held his ground.

Hamlin was in position to win his first Brickyard 400 and become the fourth driver in history to win the event and the Daytona 500 in the same season when the tyre demons haunted his car. With seven laps remaining, his right-front went down and he careened into the outside wall, lighting his car on fire.

“We were stretching out there but we weren’t pushing our right-front at all,” Hamlin said. “It was kind of roulette, when you get one that’s gonna stay together or not and mine didn’t. You saw the end results.”

Overtime was initiated as Harvick and Kenseth held the front row, the latter seeking his first win since his return to racing in May. Despite being on older tyres, Harvick received a strong push from SHR team-mate Cole Custer and began to pull away. Kenseth could not find the draft as Harvick stormed off to his third Brickyard victory and 53rd career win. The triumph also secured a weekend sweep for Stewart-Haas after Chase Briscoe won the Xfinity race.

“We knew he was gonna be really close on tyres,” Harvick began after the race, “Rodney (Childers, crew chief) told me on the radio, he said, ‘Just make sure you keep the pressure on him.’, and that was all the pressure I could give. Those guys do a really good job.”

Coming to the finish, DiBenedetto and Dillon were racing in the top ten when they collided and crashed into the outside wall. Both would finish outside the top fifteen. Michael McDowell slipped by to finish seventh for his second top-ten finish of the year (and second in three races), his best career finish on a non-superspeedway, and Front Row Motorsports‘ first top ten at Indianapolis.

Roger Penske Makes Tough Decision to Not Allow Fans at the Indianapolis...