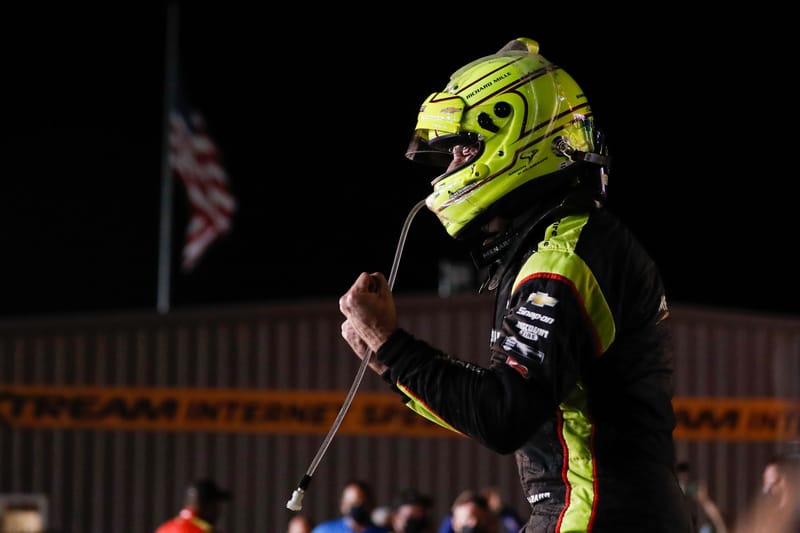 After fuel pressure problems in qualifying forced Simon Pagenaud to start at the back of the grid, the Frenchman found himself in victory lane for the first race of the Iowa IndyCar 250s doubleheader at Iowa Speedway.

It would be Conor Daly for Carlin who would take the field to the green after a brilliant lap in qualifying for the small team, and he darted to almost a two second lead over Josef Newgarden, who started alongside him on the front row.

Daly had almost a two second lead by lap six, and it took Newgarden just as many laps to reel the #59 car back in and make the pass in turn two on lap 14. Daly didn’t falter however, holding his own in a Team Penske sandwich of race leader Newgarden and third place Will Power. Daly would hold his own until lap 51 where Power would finally overtake him.

It was a relatively quiet drive for the next 30 laps before Rahal Letterman Lanigan Racing’s Takuma Sato came into the pits very early on lap 46 for new tyres. Simon Pagenaud would also gamble before the fuel window came in on lap 59.

The frontrunners made their pit stops in the lap 60-70 range as expected, but pit lane wasn’t without its drama again this week as more crews made mistakes.

On his stop on lap 70, Josef Newgarden had a small hold-up with the right rear tyre, and Colton Herta had a slow stop as the car wouldn’t take on fuel for a moment which dropped him from fourth to outside the top 10.

As the pit stops cycled out, Sato’s early gamble paid off as his fresh tyres allowed him to storm through the field, who were on much more worn tyres and take the lead. The last driver to stop was Chip Ganassi Racing’s Felix Rosenqvist, who took his Firestone tyres 85 laps on a circuit known for being tough on tyres.

Lap 94 saw Tony Kanaan scrape the wall in turn four, bending his suspension. His A.J. Foyt Enterprises team spent time fixing the car in the the pits just to get the #14 car back out on track to get Kanaan back on track for what will be his final races at Iowa as he winds his career down.

Lap 121 would be the next pit stop window for the leaders, as the Arrow McLaren SP car of Patricio “Pato” O’Ward came in from fourth place to make his pit stop. His teammate, rookie Oliver Askew, would pit the very next lap. The two were running fourth and fifth respectively before pit stops.

The “Pit Accident Plague” would hit Takuma Sato next, as he pitted from the lead on lap 127. Sato, like Newgarden, had a hold up on his right rear tyre.

Simon Pagenaud, who inherited the lead during the pit cycles, was due to come in on lap 144 when his Penske teammate Will Power crashed coming out of turn four.

Power slammed the outside wall, as his left front tyre came off the car. The wheel was not on tight enough during his pit stop, which caused the incident as the “Pit Accident Plague” strikes again.

The aeroscreen, which was implemented this season to help prevent debris from hitting the drivers in the cockpit, made its first appearance of the night here as if the stray tyre had gotten any closer to Power, it could have hit him.

This was a lucky caution for the likes of Pagenaud as well as many drivers in the top ten like Alexander Rossi, Rinus Veekay, Scott Dixon were able to come down and make a pit stop without losing a lap. It also trapped Josef Newgarden one lap down.

The Arrow McLarens of O’Ward and Askew were set to restart the race first and second respectively, with the lap cars of Ryan Hunter-Reay and Josef Newgarden in between them looking to get around Pato and get on the lead lap.

Everything was set to restart the race on lap 156, but the start was aborted. This message didn’t reach some of the cars further back, as Rinus Veekay and Colton Herta got in a very scary crash, sending Herta airborne.

Veekay got loose coming off of turn four and had to check up and Herta had a run on the rookie. The #88 car vaulted off of the left rear tyre of the Dutch rookie and sent him airborne, landing on the SAFER barrier instead of the catchfence. Both drivers would be okay after the wreck.

This would be another instance where the aeroscreen came into play, protecting Veekay as Herta launched over him. It also protected Marcus Ericsson who had debris from Herta hit his aeroscreen.

After the wreck was cleaned up on the frontstretch, some drivers took advantage of the lengthy caution to make one last pit stop to take them to the end. Ericsson, Rossi, Daly, and Graham Rahal are just some of the names that took the opportunity.

The race finally got going again on lap 170 as O’Ward led the field to the green flag. Pato wouldn’t hold the lead for long, as Simon Pagenaud inherited the lead on lap 178. Rossi, who was sitting in fourth at the time, was primed to take the lead as many assumed Pagenaud, O’Ward and Askew would need to pit.

O’Ward and Askew would pit on lap 189 and lap 192 respectively, however the “Pit Accident Plague” struck O’Ward now as the team would drop his car too soon off the jack before service was complete.

Askew’s stop was issue free and with incredibly fast, fresh rubber to burn, Askew made a charge. Rossi, who was second, began fighting a loose racecar and slipped down the top 10 very late in the race allowing Scott Dixon to take second place. It was unsure if Dixon had to make one more stop or not, but like Pagenaud he was able to make it to the end.

Inside ten laps to go, Oliver Askew was able to swallow up Rossi and claim third as Simon Pagenaud would complete his brilliant last to first run and win with Dixon second. Dixon, like Pagenaud, started further back in the field in 17th place.

Pagenaud’s win would mark the first race this season won by a team other than Chip Ganassi Racing, and it would also be Askew’s first IndyCar podium.

Josef Newgarden was also able to recover from being stuck a lap down to finish with a respectable fifth place. Polesitter Conor Daly and Carlin were able to finish with a strong top 10 finish of eight by the end of the night.

The night would be unlucky for the Andretti Autosport cars of Zach Veach and Marco Andretti. Marco reported a fire that burnt through the GCU and clutch line not allowing the car to shift. Veach also reported clutch issues.

Tomorrow night the drivers will go again for another 250 lap race, with Josef Newgarden starting on the pole.

By Griffin Schmoyer
4 Mins read
With the 2021 IndyCar season about to get underway, here is everything you need to know ahead of the Honda Indy Grand Prix of Alabama.
FeaturesIndyCar

By Griffin Schmoyer
9 Mins read
With the 2021 NTT IndyCar Series about to begin, here’s everything you need to know ahead of a highly anticipated season.
IndyCar

By Paul Hensby
2 Mins read
Sébastien Bourdais topped day one in Indianapolis, but it was Josef Newgarden who ended the two day test with the fastest time overall.