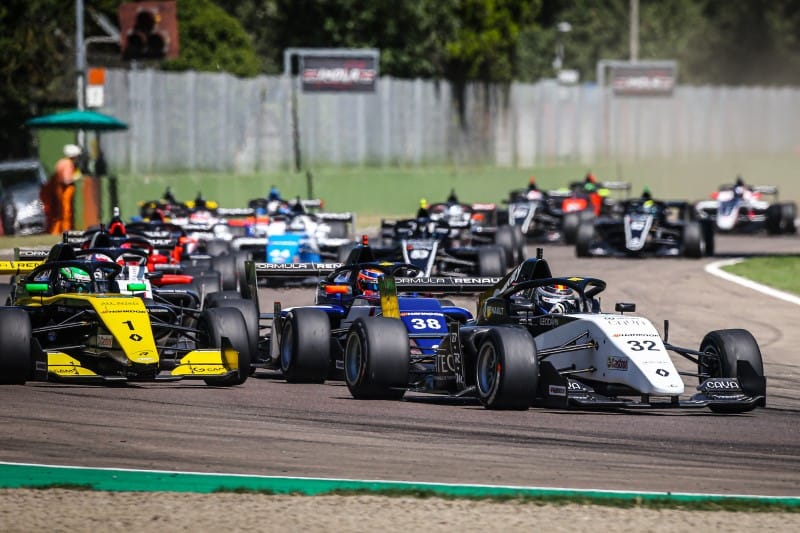 The Formula Renault Eurocup championship continued with its second round of the year last weekend, with the series hitting the Autodromo Internazionale Enzo e Dino Ferrari for two more races.

The eighteen drivers that competed in the first race at the Autodromo Nazionale Monza returned for round two, however, two teams expanded their line-up, bringing the total entries to twenty.

As debuts go, for Vidales it could not have gone any better.  The young Spaniard, racing in his very first single seater race after stepping up from karting, took pole position with a time of 1:40.419, 0.114 seconds clear of Collet, while Victor Martins (ART Grand Prix) and Alatalo.

Vidales kept the lead at the start and quickly drew away from Collet, while Alatalo jumped ahead of Martins to run third.  Behind them, a slow start from Reshad De Gerus (Arden) dropped him down the order from eighth on the grid, while contact between Ugo de Wilde (Arden) and Grégoire Saucy (R-ace GP) promoted Paul Aron (ART Grand Prix) to sixth behind Alex Quinn (Arden).

The gap at the head of the field was more than two and a half seconds at one point before Vidales saw his lead reduced to nothing as Ptácek’s car was stranded in the gravel trap after his suspension broke.

Vidales maintained his lead at the restart, withstanding the pressure from Collet, but the race was to end behind the safety car as Aron spun out from sixth.  This gave Vidales a first race victory ahead of Collet, with the latter taking over at the top of the championship standings as a result.

Alatalo took his first Eurocup podium in third ahead of Martins, while Quinn ended fifth ahead of Franco Colapinto.  Colapinto, driving for MP Motorsport, was not able to replicate the form from Monza and could only muster sixth, while Lorenzo Colombo took his first points of the season for Bhaitech Racing in seventh.

Sunday morning’s second Qualifying session saw the Imola Eurocup lap record beaten by Alatalo, who took his maiden pole position with a lap of 1:40.099, 0.166 seconds clear of Vidales, while Collet and Quinn filled row two ahead of Martins and Colapinto.

At the start, the two JD Motorsport drivers at the front switched positions, with Vidales getting the jump on Alatalo into turn one.  There was also a switch of position in third, with Quinn finding his way ahead of Collet.

From there on, Vidales had the race under control, and he took a second victory of a near perfect weekend for the Spaniard, with Alatalo maintain his position in second to give JD Motorsport for a team one-two finish.

After getting ahead of Collet after the resumption of the race following another incident for Ptácek that needed another safety car, Martins put pressure on Quinn for the final podium spot, but the Arden driver kept the Frenchman behind him to claim third.

Collet had a lonely race once Martins got passed and finished fifth but did enough to pull further away from Colapinto at the head of the championship standings as the Argentine driver could only finish seventh behind Aron.  De Wilde, Tijmen van der Helm and Amaury Cordeel (both FA Racing) completed the top ten.

David Vidales (Saturday): “I could not have wished for a better debut in single-seater racing and this weekend is off to a fantastic start. The start was a bit complicated as everything is new and different from karting!

“I had to get the tyres warmed up and make sure they didn’t deteriorate as I knew the race would be long. However, I held on to the lead when the lights went out and my pace was good enough to make a small gap until the safety car.

“This was also new for me, but I made a good restart to go on for the win. I think we can still improve in some areas, so the target will be to do the same tomorrow. I think that if we keep working like this, we’ll be able to fight for the title!”

David Vidales (Sunday): “I can’t find the words to describe this first weekend in the Formula Renault Eurocup! I wanted to get off to a better start than yesterday. I managed to do that and that allowed me to take the lead immediately.

“After that, the pace was excellent thanks to the wonderful work of the team. I was able to widen the gap before and after the safety car to keep the lead. We’ll have to do the same at the Nürburgring.

“The aim now is to keep learning and score big points. Consistency will be the key!”