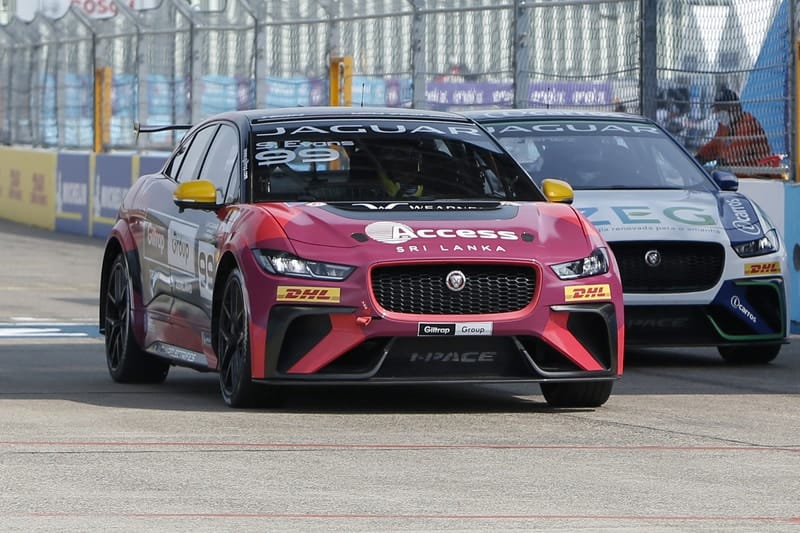 This comes after the Kiwi took two victories in the last two races, including the reverse-grid race around the Berlin Templehof Airport Circuit, meaning that there is everything still to play for ahead of the final two races of the series.

But in the first race of the weekend, it was the championship leader who ruled supreme as the Brazilian won the first 25 minutes + one lap affair.

With a quiet first half of the race, Nick Foster in the Jaguar China Racing car deployed attack mode and inherited the lead from Jimenez when the Brazilian used his first attack. But when the Aussie went for his second use of attack, he ran deep on the outside of turn five which saw all chances of a win disappear.

When fighting with the sister ZEG iCarros Jaguar Brazil Racing car of Caca Bueno, Foster suffered more damage and he finished down in eleventh. Bueno finished second to team-mate Jimenez while Evans finished on the podium once again with a strong third-placed finish.

Jaguar VIP Driver Abbie Eaton picked up eighth place on her return to the series after last racing for the series in Diriyah.

The second race was a true classic as Evans held off Jimenez in a thrilling Sunday morning race around the Berlin Templehof Airport Circuit in Berlin.

Despite starting fourth on the grid, Evans soon made progress by activating his first attack mode to pass Bueno and after another attack blunder from Foster, he soon found himself staring down the barrel at Jimenez who led from pole position early on.

With Evans using his attack early, the Kiwi was primed to inherit the lead once Jimenez had to use his second attack mode, but despite the extra power boost, the Brazilian was unable to get past his title rival.

Behind the top two, Bueno finished third with Foster claiming fourth ahead of the two Brits of Alice Powell and Abbie Eaton.

After his earlier exploits allowed him to close the gap to points leader Jimenez, Evans knew that this reverse-grid race presented another opportunity.

Evans started the race from tenth while Jimenez was eleventh and after deploying his attack mode early, Jimenez gained two further places up to eighth in the opening stages.

But with race leader Paul Spooner setting a steady pace, there was little chance of the Brazilian getting too far ahead.

After careful navigation through the pack, Jimenez and Evans were once again battling for victory. Just like he did earlier, Jimenez took the initiative and deployed his second attack earlier, darting up the inside to gain the lead while Jimenez went to the activation zone.

As the series heads to the third different circuit with just two races left to run, Sergio Jimenez leads the championship on 136 points, just six points clear of his protagonist Simon Evans who after taking two wins on Sunday truly has the wind in his sails. But who will win the 2019-20 Jaguar I-Pace eTrophy Championship?