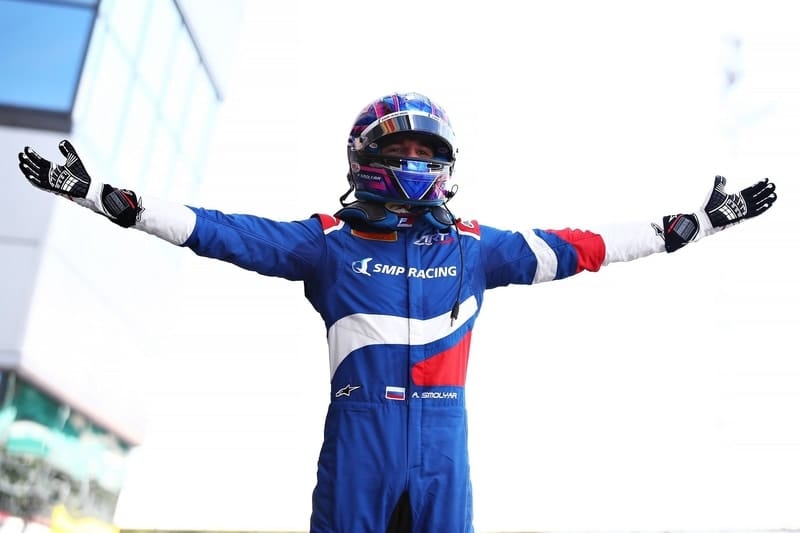 Russian rookie Aleksandr Smolyar was able to stand tall against constant pressure from behind to secure his first FIA Formula 3 victory at Silverstone.

The ART driver started from reverse grid pole and had broken the DRS initially but an early safety car for Igor Fraga’s stricken Charouz wiped out his lead.

From the restart, Smolyar never broke the magical one second gap to David Beckmann behind but the German couldn’t quite get close enough to make a race-winning move.

That was largely thanks to Smolyar’s weaving down the Hangar straight in an attempt to break the tow. While it never looked dangerous or in defence of his position, Smolyar is under investigation for multiple direction changes.

Whatever the outcome of the investigation, Beckmann will be happy as he claws back valuable points on championship leader Oscar Piastri, who retired for the first time this season as his DRS was stuck open.

Clément Novalak completed the podium as the top three all finished where they started. It was Novalak’s second podium of the year following his first in the reverse grid race at Austria.

For all twenty laps, Alex Peroni sat patiently behind the trio, hoping for some contact or a mistake to advance to the podium but it wasn’t forthcoming and the Australian had to settle for fourth, holding off the charging PREMA duo of Frederik Vesti and Logan Sargeant.

Despite finishing behind, Sargeant gets more points than Vesti as a result of scoring the fastest lap late on. Race one winner Liam Lawson was battling the pair but fell away towards the end and finished seventh.

He was able to hold off Théo Pourchaire who made good ground to eighth, passing Richard Verschoor in the closing laps while Jake Hughes made the smallest of errors at The Loop which dropped him to tenth.

The safety car was a blessing for Sebastián Fernández who had to serve a ten second stop/go penalty after being out of position past the safety car line. The Spaniard had gone into safety mode on the formation lap and couldn’t make it back to his fourth placed start before the line.

By Joe Ellis
2 Mins read
A first taster for what is to come as FIA Formula 3 returned to the track. Aleksandr Smolyar was quickest but Jonny Edgar and Jak Crawford have made strong starts to their rookie campiagn.
Formula 3

By Joe Ellis
1 Mins read
Kaylen Frederick makes the step up to Formula 3, leaving just three seats open ahead of the 2021 season, all at Charouz.