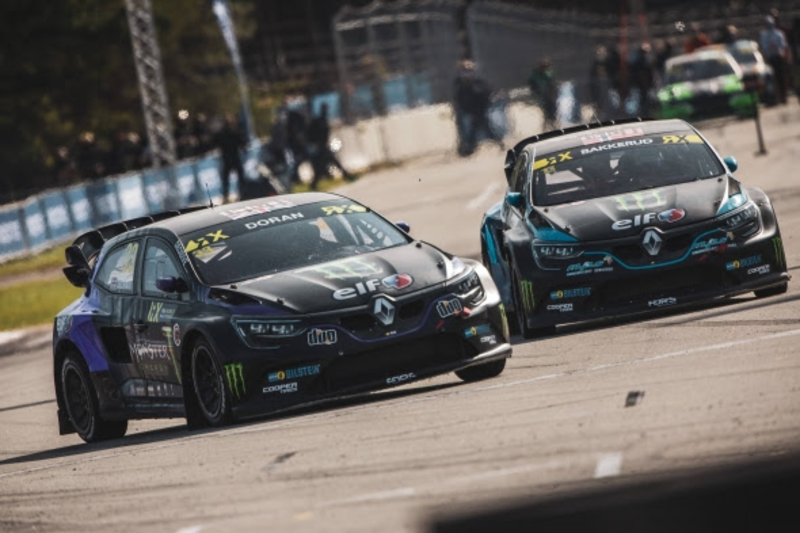 It was a day of ups and downs for Monster Energy GCK RX Cartel’s Andreas Bakkerud and Liam Doran. Both secured places in the semi-finals for the first time this year but they were not without their problems.

A decent qualifying one from both drivers saw Doran sitting in seventh and Bakkerud sitting in ninth. However, it went downhill fast for them in qualifying two. Doran slotted ahead of his teammate and they ran well in second and third. Bakkerud then suffered a broken damper which dropped him behind Timur Timerzyanov. Doran was on a very good run in second but disaster stuck when a suspension arm on the megane broke dropping him to twelfth in the standings. Qualifying three saw the pair put in a good run securing them a spot in the semi-finals.

“For the first time this season, I feel like we showed some true potential” said Doran post-event.  “Two top ten times, which would’ve been three top ten times if it wasn’t for the mechanical failure, one of which was a fifth and the fastest times across all GCK cars, which was nice. A bit of a rollercoaster of ups and downs as the problems in the semi-final were disappointing of course. There is obviously potential there, there has been at every event, and yet again we’ve shown it but we’re just lacking the required consistency at the moment, so this needs to improve tomorrow.”.

Bakkerud echoed Doran: “We lacked the consistent speed to be the ones spraying champagne at the end of the day. We are more regularly seventh or eighth, so that’s why we end up just outside the finals. We really need to dig deeper to find a bit more consistency and hopefully we can make some overnight adjustments to help with that and some of the inconsistencies we have at the starts. The team is hard at work already, so all in for tomorrow.”

Bakkerud and Doran have shown glimpses of the pace of the Megane but they need more than glimpses. The constant mechanical issues must surely have them considering their options for the future. World RX returns tomorrow with round six.

By Kieran Forrest
1 Mins read
Andreas Bakkerud and Robin Larsson have been named the top heads at DRR for the upcoming 2023 NRX Season.