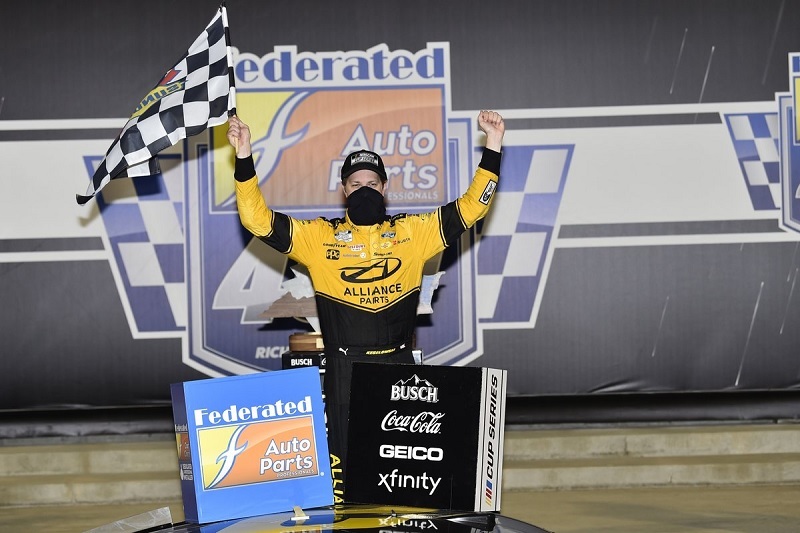 Fans who only watch the NASCAR Cup Series for the wrecks might not have enjoyed Saturday night’s Federated Auto Parts 400 at Richmond Raceway. In a race that ran entirely green with the exception of scheduled breaks, Brad Keselowski took the lead with 48 laps remaining to lock his place into the next round of the playoffs.

Kevin Harvick, who punched his ticket to the Round of 12 with his Darlington win last Sunday, started on the pole ahead of Joey Logano. Kyle Busch was sent to the rear for two failed inspections before the race.

Harvick led the first twenty laps before Austin Dillon passed him for the position. It was Dillon’s first career laps led at Richmond in thirteen Cup starts.

After Dillon enjoyed ten laps in front, the competition caution was waved on lap 31. The leader was the first in and out of pit road, while Ryan Blaney had to return for a second stop to address a loose lug nut.

The restart came on lap 38 as Dillon held off Logano, but lost the lead to Denny Hamlin after a lap. Hamlin and Dillon battled for the top position, while Busch’s climb through the field peaked in the top fifteen. Dillon was unable to catch Hamlin for the stage win.

Hamlin and Dillon suffered speeding penalties between stages, which allowed Logano and Harvick to inherit the top two spots as Stage #2 began.

Logano cleared Harvick for the lead before Keselowski joined the picture, passing Harvick before closing on his Team Penske team-mate. The two dueled for the position throughout the early portion of the stage, with Keselowski taking first on lap 121. Behind them, Truex moved up to third.

After 50 laps into the stage, Dillon had gained nearly twenty positions as he and Hamlin moved through the field.

Green-flag pit stops began on lap 140 for those who chose to make two stops in the stage. DiBenedetto was the first of the playoff drivers to hit the pits, with Harvick following suit a lap later.

Drivers on a one-stop strategy went to pit road as the stage reached its halfway point. Dillon pitted on lap 153, while Keselowski surrendered the lead when he did so. Harvick assumed the lead before going to pit on lap 186, but his right-side wheels ran over the commitment line, resulting in a penalty.

Dillon reclaimed the lead as the pit cycle ended, but lost it to Keselowski on lap 218. Harvick rejoined the lead lap shortly after. Keselowski would score the stage win while Dillon recorded another runner-up finish. Behind were Truex, Logano, Elliott, Kyle and Kurt Busch, Almirola, Matt Kenseth, and Harvick.

Keselowski and Truex paced the field to the start of the final stage on lap 244. As Keselowski led, Logano took second.

The leaders opting for a two-stop plan began pitting as the event neared the 300-lap mark. Kurt Busch, on the other hand, stayed out on a one-stop strategy before finally going to pit on lap 312. Logano took the lead on lap 308, leading for ten laps before losing the spot to Keselowski.

Two-stop pitters began with Dillon, who missed pit road when he attempted to enter on lap 335. Truex had committed a similar error earlier in the event. Busch, on older tyres via his pit strategy, was overtaken by Dillon for the lead with 49 laps to go. However, an infringing Keselowski passed him for first a lap later. Truex claimed second from Dillon on lap 360; Dillon’s fall continued when Logano took third.

Keselowski would lead for the rest of the race en route to his fourth win of the year and first at Richmond since the 2014 fall race. However, he refrained from celebrating with a burnout as he expressed his intention to run the car—which he previously drove to victory at Loudon in August—in the season finale at Phoenix should he qualify for the Championship Round.

“I don’t want to look too far ahead, we got to get there (first; to Phoenix),” Keselowski said in his post-race interview with NBCSN. “Next round is gonna be really difficult, but still. I’m really pumped about this performance and the way we ran at short tracks. […]

The victory completed an impeccable Saturday for Penske, whose Xfinity Series driver Austin Cindric clinched the regular season title in his series’ Richmond race earlier in the day. Will Power made it two-for-two with a triumph in the IndyCar Series at Mid-Ohio in the afternoon.

The race was remarkably clean, with the only cautions being for the competition yellow and the stage breaks. Since the introduction of stages in 2017, only the 2019 spring Las Vegas and Sonoma races have run entirely green outside of the stage cautions; the 2019 fall Dover event also went without incident outside of an early debris caution. The three yellows also extend a trend of Richmond races with fewer than five cautions to four. The 2018 Federated 400 began the streak when it had just three; unlike the 2020 date, the 2018 race’s third caution was for a wreck.