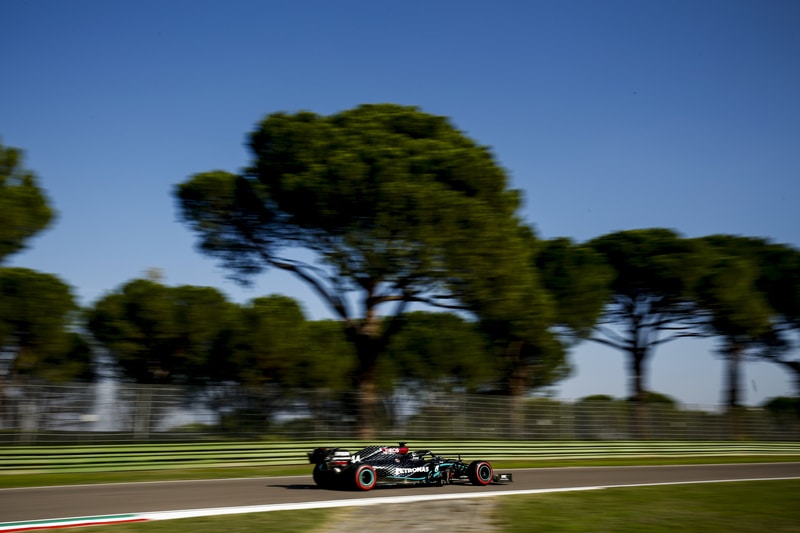 Valtteri Bottas took pole position as he led a Mercedes front-row lockout at the thirteenth race of the 2020 FIA Formula 1 World Championship, with Lewis Hamilton following nearly a tenth behind at the spectacular Autodromo Internazionale Enzo e Dino Ferrari.

This starting order appears to be rather important for the race tomorrow, (which has sunny yet partly-cloudy skies forecast) as the narrow track is expected to restrict overtaking significantly. The three Pirelli tyre compounds for the race are a step softer than those at Portimão, with the C2, C3 and C4 being utilised this weekend at Imola.

The qualifying session started under clear skies at 13:00 GMT, and as is rather common with Italian circuits, traffic played a big role in Qualifying for many drivers- in some cases determining grid positions. Early on in the first session, both Sainz and Valtteri Bottas were obstructed at Rivazza and were subsequently compromised attempting to start their vital flying laps.

As well as this, track-limits antics continued with multiple lap-times seeing deletions after infringements- particularly at turns nine and fifteen. Bottas experienced such deletions first-hand, and was then pressured to set another lap in order to make it out of the slowest five.

With just ten seconds to go, Kevin Magnussen took a trip over the gravel and therefore sabotaged his chances of advancing into the top fifteen. The Dane looked furious, and just seconds later Kimi Räikkönen had his lap-time deleted rendering him seventeenth only. Another stand-out performance saw ‘Mr. Saturday’ George Russell emerge into the second part of Qualifying as his team-mate Nicholas Latifi could only manage nineteenth.

Just minutes into the second session, an infuriated Verstappen aired a worrying radio-message complaining about a lack of power. The Dutchman was unable to set a lap-time early on after retiring to the garage for repairs, and so many were doubtful he would even make it into the top ten. It looked like double-trouble for Red Bull as Alexander Albon fell victim to the awkward curbs at the Variante Alta chicane. The Thai-driver flat-spotted the tyres and then had to box for new rubber.

Fortunately, Verstappen’s problem was not terminal and the Red Bull team worked their usual wonders in order to get the car ready for a lap. Team Principal Christian Horner went on to elaborate on the problem, citing the problem was an ‘electrical issue’ that caused an ‘engine misfire’.

Interestingly, neither of the BWT Racing Point Formula One Team drivers could make it into the final session after mistakes and deletions saw no improvements made. Sebastian Vettel’s Ferrari nightmares continued on the team’s home-soil as the German could only set a time good enough for fourteenth, and an excited Russell capitalised on the circumstances to bag himself thirteenth.

Q3: Bottas pulls it out the bag to take pole

The final (and most important) twelve-minute shootout started with the Mercedes drivers in a class of their own in the fight for pole position, as Hamilton and Bottas set the pace with the first of the one-minute-thirteens.

Alexander Albon fell victim to yet another track-limits infringement and was thus even more pressured to perform in the closing stages. The Red Bull driver could only manage sixth, and was beaten by the very man he replaced at the top team- Gasly.

Ricciardo had a great session and set a scintillating lap to take fifth place behind the AlphaTauri, and Kvyat also performed admirably in his first Q3 appearance since Mexico last year to take eighth.