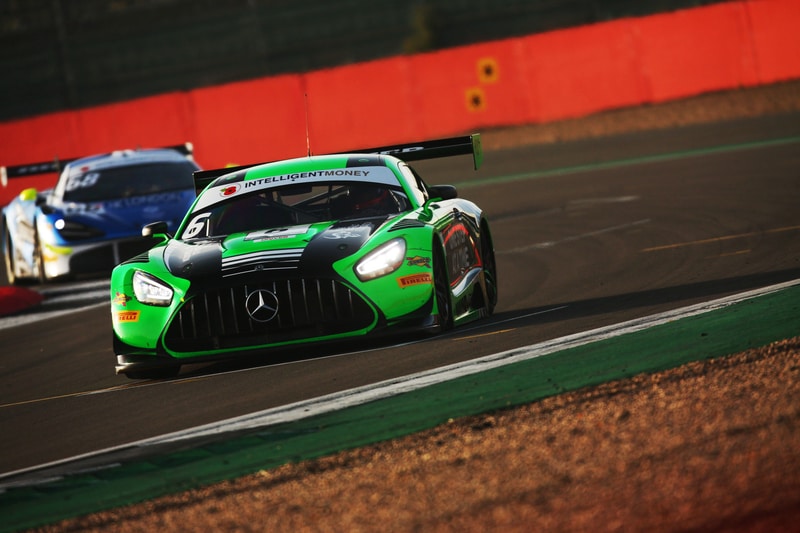 Yelmer Buurman set the fastest time in Free Practice One with a time that blitzed the track record which hints that the Intelligent Money British GT Silverstone 500 finale will be the fastest ever British GT race at the track.

Buurman’s time of 1m58.174s lap on his fifth tour saw the #6 RAM Racing Mercedes lap nearly a second quicker than Adam Christodoulou’s 1m59.095s effort from qualifying in 2018 which stands as the official fastest British GT lap ever around the Silverstone Grand Prix Circuit.

The top seven crews dipped below into the 1 minute 58 second margin but no-one could get near Buurman’s pace as he finished the session 0.147 seconds clear.

Jonny Adam in the #1 Garage 59 Aston Martin was Buurman’s closest challenger but any hopes the Scot had of overhauling the Dutchman were ended when the red flags curtailed the running a few minutes early due to a collision between Euan Hankey’s GT4 McLaren and Richard Williams’ Steller Audi.

Phil Keen and Adam Balon in the #72 Barwell Motorsports Lamborghini were fifth fastest and the quickest of the championship contenders, but not by much as their Barwell Lamborghini team-mates Rob Collard and Sandy Mitchell were only 0.077 seconds behind in sixth.

But both of the Lamborghinis were quicker than their main rival, the championship leading #69 RAM Racing Mercedes of Patrick Kujala and Sam De Haan, but not by much, as the Mercedes ended up just 0.032 seconds behind the two Lamborghinis in seventh.

The final title contenders Michael O’Brien and James Baldwin rounded out the top 10 in the first of the twin Jenson Team Rocket RJN McLarens, with the sister car crewed by GT3 rookie Jenson Button and Chris Buncombe finishing its first British GT session in 17th.

Of the five new GTC entries, Ferraris led the way as Ross Wylie put the Simon Green Motorsport 488 Challenge he shares with Lucky Khera and Lee Frost top of the times.

The Scott Sport Ferrari of John Dhillon and Phil Quaife was second, ahead of the FF Corse entry driven by Jamie Stanley and Laurent de Meeus.

Caroline, who shares the #97 Aston with Daniel Vaughan, produced a 2m10.532 second time which was 0.7s faster than Michael Broadhurst’s 2018 benchmark.

Scott Malvern had initially set the early pace Team Parker Racing Mercedes-AMG he and Nick Jones have returned to for this event, but ultimately finished down in third third after being bumped by both Caroline and the #23 Speedworks Toyota GR Supra of Sam Smelt and James Kell which lapped just 0.061s shy of Caroline.

Championship newcomer MSL Powered by Newbridge Motorsport got their British GT debut to a good start with the fourth fastest time ahead of the two other main GT4 title contenders, TF Sport’s second car of Connor O’Brien/Patrick Kibble was fifth and Jordan Collard/Patrik Matthiesen’s HHC’s McLaren in sixth