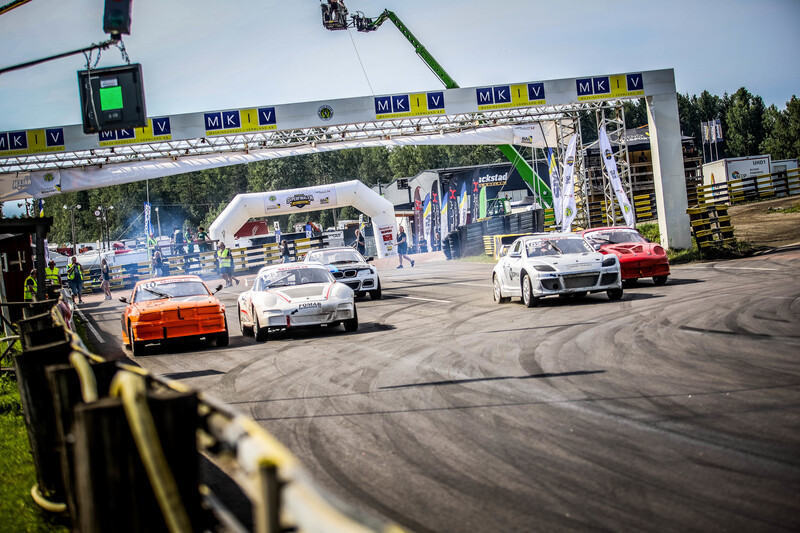 After the successful 2020 RallyX Nordic season took place despite the COVID-19 pandemic, next season’s calendar has been revealed along with details surrounding the continuing state-of-the-art live broadcasting package as well as news of the Open 2WD class coming back to the championship.

2021 will feature a total of four events – including three double-headers and two events that will run with alongside the Swedish Rallycross Championship (Rallycross SM).

The season will begin in a unusual way with the first and second rounds being held in Denmark at the Nysum track on 1/2 May. The circuit hosted the season finale this year as well as the final races of the RX2 International Series before it’s replaced by the FIA RX2e Championship next year.

Höljes, that has hosted the season opener for the last few years, will for 2021 host the third and fourth round of the season between 13-16 May, where the Swedish Rallycross Championship will also appear.

This season Höljes hosted the All-Star ´Magic Weekend´ where they aired the all-new live broadcasting format for the first time and had many guest stars appearing on the start grid due to the event being one of the first to run following the worldwide lockdown earlier in the year.

Rounds five and six will then take place in either Norway or Finland on 5/6 June, with the location set to be announced early next year.

Arvika will then host the final round of the season between 13-15 August, with the SM classes joining the action again.

The championship will also host a media day at Strängnäs Motorstadion in Sweden in April before the season kicks off a month later.

Joining alongside the four classes of Supercars, Supercar Lites, Crosscar/Crosskart and Crosskart Junior will be the returning Open 2WD class for Supernational cars from the NEZ region.

Live broadcasting by NEP will also be available for the standalone Swedish Rallycross Championship events held in Piteå on 12/13 June as well as in Västerås on 24/25 July.

“We are delighted to reveal more about our plans for 2021, this year has clearly been a challenging one for everybody, but we believe we made the very most of it with three excellent events. To go racing at all in the prevailing circumstances was a victory in itself, but to deliver such outstanding on-track action and such a phenomenal broadcast product was hugely satisfying and immense credit to the entire RallyX Nordic team.” Jan-Erik Steen, CEO of RX Promotion, said on the news.

“We are far from willing to rest on our laurels, however, and the bar must be raised even further for 2021. Not only are we adding a new class to RallyX Nordic’s growing portfolio for Open 2WD competitors, but our strong working relationship with the Swedish Championship / SM organisers has allowed us to reach an agreement whereby we will join this series at both Swedish events on our calendar, adding to the appeal for rallycross fans.“

“Nysum, Höljes and Arvika are three of the premier rallycross tracks in the world and will provide drivers and teams with an exciting all-round challenge, whilst we expect to be in a position to confirm the remaining venue soon, with discussions ongoing with several first-rate circuits,” he added.

“We have also taken the very deliberate decision to wrap the RallyX Nordic season up in August, which will allow all those that wish to do so the opportunity to ship their cars to America in time to participate in Nitro Circus’ first full rallycross campaign. Nitro Rallycross, Travis Pastrana  and his crew certainly have some extremely exciting ideas for that series, which we are all looking forward to seeing come to fruition.”

“Knowing that many of our Supercar and Supercar Lites entrants are similarly interested in racing stateside, we are collaborating closely with Nitro Circus to allow them to contest as many events as possible in 2021 on both sides of the Atlantic. After the truncated season we have all just had, it seemed like the very least we could do.”

By Nigel Chiu
1 Mins read
Magnus Dall is ready to make his debut in the RallyX Nordic next year as he looks to progress from two-wheel drive to four-wheel drive rallycross competition.
RallyX NordicRX2

By Pontus Lindroos
4 Mins read
Oliver Eriksson won his first RallyX Nordic event of the season at Nysum and has extended his championship lead to 19 points going into today’s final round.