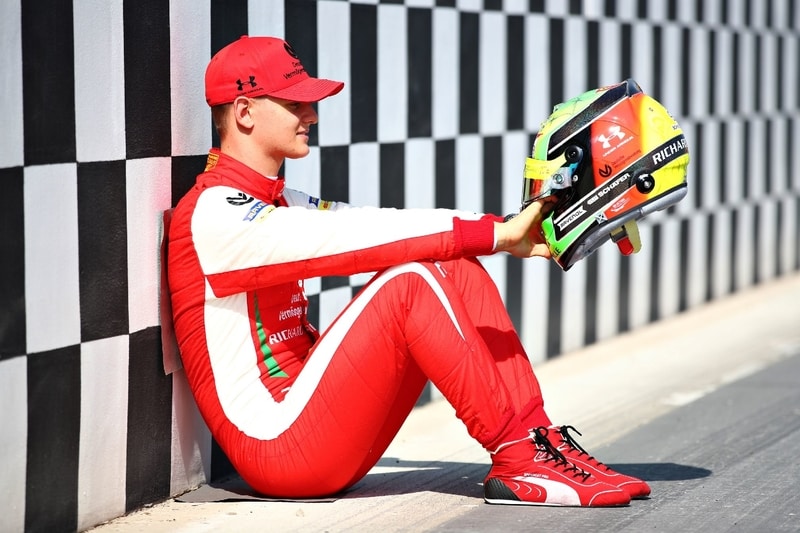 A condensed 2020 FIA Formula 2 season left us breathless time and time again. From the season opener in Austria all the way to the finale in Bahrain; non-stop action, impressive rookies, plenty of talking points and a title fight that went down to the wire kept us right on the edge of our seats.

And through all of that came our eventual champion Mick Schumacher. The German driver built his championship challenge on consistency with a whopping ten podiums over the course of 24 races which was enough to see him lift the title ahead of Callum Ilott.

Schumacher will go on to drive for Haas Formula One Team in 2021, beating Ilott to that seat as well, and there will be plenty of eyes on Mick as the son of seven-time world champion Michael Schumacher and a Ferrari Academy driver.

The Battle of the Prancing Horses:

While Schumacher and Ilott were the leading duo for much of 2020, they weren’t the only Ferrari Academy Drivers to make a name for themselves. In fact, the early championship leader was rookie and 2019 FIA Formula 3 Champion Robert Shwartzman who grab every opportunity he could in the first half of the season before tailing off towards the end.

But the fight between Schumacher and Ilott was all anyone could talk about with the pair trading blows and racing wheel-to-wheel regularly. Ilott drew first blood taking victory in the opening race of the season before doubling up at his home race at Silverstone. It wasn’t until the feature race at Monza (Round 15!) that Schumacher stood on the top step for the first time but his relentless points gathering and podium hoarding kept him in the conversation.

Ilott went on to win the sprint race the following day which had the UNI-Virtuosi driver in a commanding lead but the best was yet to come from Schumacher. Victory and a podium in the two races at Sochi saw the PREMA driver claim the initiative in the points standings as the series headed to the desert for the Bahrain double-header finale.

Ultimately, two non-scoring finishes in the four Bahrain races prevented Ilott from clawing back Schumacher’s advantage ensuring the German firmly stepped out from his father’s shadow before his move to F1.

It’s not all doom and gloom for Ilott though as he was recently announced as the Scuderia’s test and reserve driver for 2021 with a view to a race seat in 2022.

Shwartzman dropped to fourth in the end as the Raging Bull of Yuki Tsunoda disrupted the herd of prancing horses at the top of the championship.

Tsunoda and Shwartzman were two of 12 rookies to take some part in the 2020 F2 season and the majority showed considerable skill and talent in a year which really upset the applecart.

Shwartzman took four wins (more than any other driver) and he will expect to add to that tally as he remains with PREMA in 2021 while Tsunoda claimed three victories for Carlin on his way to third in the standings and the AlphaTauri F1 seat for next year.

Christian Lundgaard was the third best rookie in the field as the Danish Renault Academy driver finished seventh in the championship, just 1.5 points behind fellow Renault junior Guanyu Zhou who perhaps disappointed in his sophomore year. Lundgaard will be hoping to challenge for the title in 2021 as will the biggest surprise of 2020 in Felipe Drugovich.

The Brazilian was a shock selection by MP Motorsport in the off season but he showed up to the first round and won the sprint race. He then went on to win a further two times and earn himself a drive for UNI-Virtuosi to replace the outgoing Ilott in 2021.

And they weren’t the only rookies to taste champagne; Dan Ticktum (DAMS) and Jehan Daruvala (Carlin) also earnt victories in 2020 with Marcus Armstrong and Juri Vips standing on the podium.

Such a strong first year for so many rookies lines up 2021 to be a thrilling year yet again.

As mentioned above, Schumacher has earnt his Formula One graduation to Haas and Tsunoda will join him in the big time with AlphaTauri but there will be a third F2 driver making the step up in 2021 (for now).

Nikita Mazepin had a great year – on track at least – for Hitech GP in what was the team’s first year in F2 after the Russian raced for ART in 2019. Mazepin won two races himself and he too got the call from Guenther Steiner to drive for Haas in 2021. Although his off-track actions could see that change yet before the Formula One paddock rocks up to pre-season testing in 2021.

And we can expect plenty of F3 drivers to make the step into F2 next year with reigning champion Oscar Piastri already confirmed to partner Shwartzman at PREMA and vice-champion Théo Pourchaire having F2 experience with HWA for the final two rounds ahead of what is expected to be a first full season with ART.

Lirim Zendeli is also confirmed to make the graduation to F2 after his announcement that he will take Drugovich’s seat at MP Motorsport after a positive post-season test at Sakhir.

Driver of the Year:

There’s plenty you could put forward for this and you wouldn’t be able to make much of an argument against a lot of them. Obviously Schumacher and Ilott take lots of the plaudits as does Drugovich for his stellar rookie season but for me, it has to be Yuki Tsunoda. For what we expected pre-season to what he actually produced, Tsunoda and his Carlin team stunned much of the field and the Japanese racer fully deserves his F1 call up.

But that signals the end of Formula 2 for 2020, the countdown has already begun for the new season to kick off in the same place the last season finished with everyone’s eyes on being Schumacher’s successor.

Schumacher’s title-winning 2020 Formula 2 season ensures he is no longer ‘just Michael’s son’, Mick Schumacher is writing his own story.