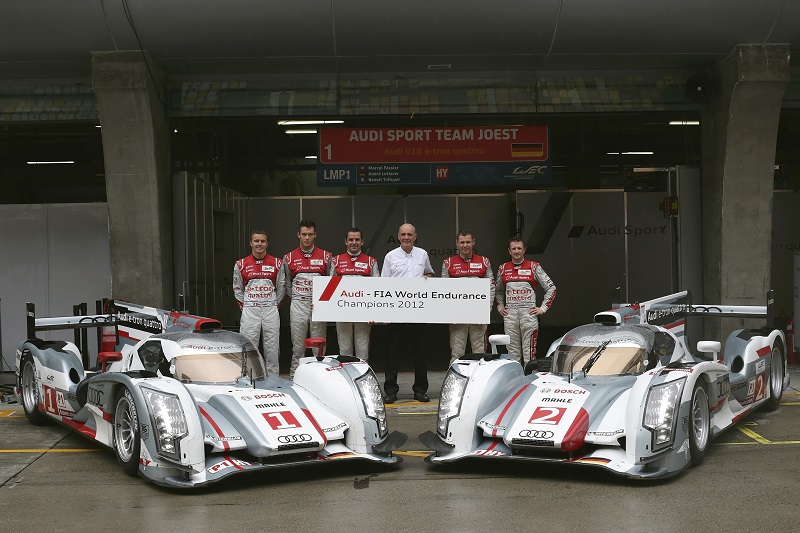 Moving on from the glory days of rallying with the Audi quattro, the German brand turned its attention to the 24 Hours of Le Mans, Le Mans prototypes and DTM racing. From 1999 to 2014, Audi Sport had one of its most successful and dominant periods of motor racing in the manufacturer’s racing history.

Sportscar racing itself in this period had a complete revamp, with the racing of road-standard cars elevating to enable more pure racing cars to be developed. DTM moved from the 80s and 90s production-based cars to prototypes that only had to resemble road cars through their silhouette, meaning under the bodywork technological developments could begin, making racing cars supremely faster than their road-legal equivalents. Le Mans also followed this trend, with a new brand of Le Mans Prototypes (LMP) being eligible for the prestigious race as of 1999. Audi saw a chance to not only develop cars that were on the edge of technological developments, but embraced the prototype mentality to create their most superior racing cars, for the brand and of their time.

The move to prototypes for Audi came as a result of the quattro being banned from touring car racing. To keep up with the field, they had to develop something new and as fast as the predecessor. The Audi R8 was the birthchild of this venture, and it took to the track for the first time in 1999 for the 24 Hours of Le Mans. As was the style for Audi, nothing was ever done half-hearted, and in it’s first race, the gruelling 24-hour endurance event, the R8 was spectacular, finishing third to take its first ever podium on debut.

It was the beginning of something beautiful for the Audi R8, as it reigned as one of the most successful sports cars in history. Of the 80 races it contended in, as a works Audi for the marque themselves and for customer racing teams, it scored 63 victories, a win percentage of 79%. During its run (1999-2005) this also brought the German brand their famous hattricks of Le Mans overall victories in the hands of Frank Biela, Tom Kristensen and Emanuele Pirro from 2000-2002. Kristensen had a wonderful connection with the Audi LMPs, claiming seven of his nine overall Le Mans victories with an Audi machine.

The highly successful R8 retired from racing in 2006, being replaced with the evolution, the Audi R10 TDI. Audi did not disappoint, with all the evolutions of the Audi R-LMP car, until Audi stepped away from LMP racing, being just as successful as the last. From 1999 to 2016, Audi managed to record 13 overall Le Mans victories out of the 18 Le Mans races that they took part in, two FIA World Endurance Championship Drivers’ titles, two Manufacturers’ titles and 107 endurance race victories. It was clear that Audi knew exactly how to develop a successful LMP car and pull together the right group of driver to extract the maximum performance out of it.

Audi left the WEC and LMP racing at the end of 2016, as Porsche were in the peak of their successes. At the time, a big discussion about the future of combustion engines was occurring, and following the wake of Volkswagen‘s ‘Diesel Gate’ (at the time, Audi’s R18 e-tron quattro was diesel powered), the German brand decided to turn their attention to electric racing. Although the TDI initiative that started in 2006 had seen Audi reduce their diesel usage by 46% within the decade, there was still a bad taste hanging around the use of diesel in attachment to Volkswagen, and the owning brand of Audi decided it was time to pool their focus elsewhere.

During this period of many successes for the brand in LMP racing, they also reigned supreme in DTM and continued to take victories in rallying. Audi made their factory return to DTM in 2004 after customer successes had been coming in the series, most notable the privately-entered Abt-Audi TT-R that had taken Laurent Aiello to claim the 2002 title. As is the pattern with Audi, they came into DTM with the same drive and motivation as any other race series and took the title on their return as Mattias Ekstrom took the 2004 title. Success continued as Audi became the only car manufacturer to score a hattrick of titles consecutively from 2007 through to 2009 with Ekstrom taking honours in 07, whilst brand colleague Timo Scheider took the glory 08/09.

Next came more successes for the new Audi A4 and Audi RS 5 DTM cars, with Martin Tomczyk bringing the A4 to the top in 2011 and Mike Rockenfeller making his mark in 2013 with the RS 5. An incredible historic moment was made in 2017, when Rene Rast not only took Audi to their tenth title, but did so in his rookie season in DTM, showing incredible speed and talent in the series. The 2017 season had the cherry placed on top with Audi Sport Team Rosberg clinching the manufacturer’s title too.

This period of time also saw Audi venture into their customer racing programme, producing GT3 and GT4 sports cars that could be purchased by teams to go racing. The R8 LMS was the first to be launched in 2009, housing more than 50% of standard parts that would come on a production-model R8. 200 of the customer racing cars were delivered to teams in its debut season, and successes once again began pouring in.

The second evolution of the customer racing car came in 2015, and just to prove Audi still knew exactly how to build a winning race car, it took victory two months after its release at the 24 Hours of Nurburgring. This year also saw the start of the Audi Sport TT Cup which was Audi’s own championship to allow young racing drivers the chance to prove themselves with the brand. The championship brought to light young drivers such as Jan Kisiel, Joonas Lappalainen and Philip Ellis, who were champions from 2015-17 respectively.

But at the heart of Audi still laid the passion for rally racing, and although their legendary quattro was no longer able to race this didn’t stop the brand. Staying with the team after their DTM successes together, Ekstrom used Audi S1s for his entire rallying career (2014-present). He took the Drivers’ and Teams’ World Rallycross Championship titles in 2016, enabling Audi to continue their successful rallying heritage.

As Audi closed the book on their LMP racing days, and continued to collect successes through DTM, GT and Rallies with customer teams, their focus was turning more to the future and the next technological advances in motor racing and production cars. Electric motor development was the way the tide looked to be turning, and as combustion engines started to become old news Audi was at the forefront of this new technological development, looking for more motorsport successes in this new, green energy automotive power. In 2014, Audi Sport joined the brand new all electric single seater series, FIA Formula E.

Return to TheCheckeredFlag tomorrow for the final instalment of The Audi Story: Racing Into the Future.

By Daniel Lawrence
3 Mins read
It will be all smiles at Toyota Gazoo Racing following a 1-2 led by Sébastien Ogier at Rally Italia Sardegna.
FeaturesGinetta JuniorMaurice Henry Column

By Maurice Henry
3 Mins read
For his second TCF column Ginetta Junior Scholar Maurice Henry gives his thoughts on a challenging weekend as the drove his first race since 2018.
FeaturesIndyCarInterviews

By Griffin Schmoyer
7 Mins read
Meyer Shank Racing have gone from one off team to full time IndyCar competitors and Indy 500 Champions in five years. Co-owner Mike Shank and driver Jack Harvey sat down with TCF to talk the team’s rise to the top.