Lights go out, Alex Bowman turns out in Daytona 500 qualifying to win pole 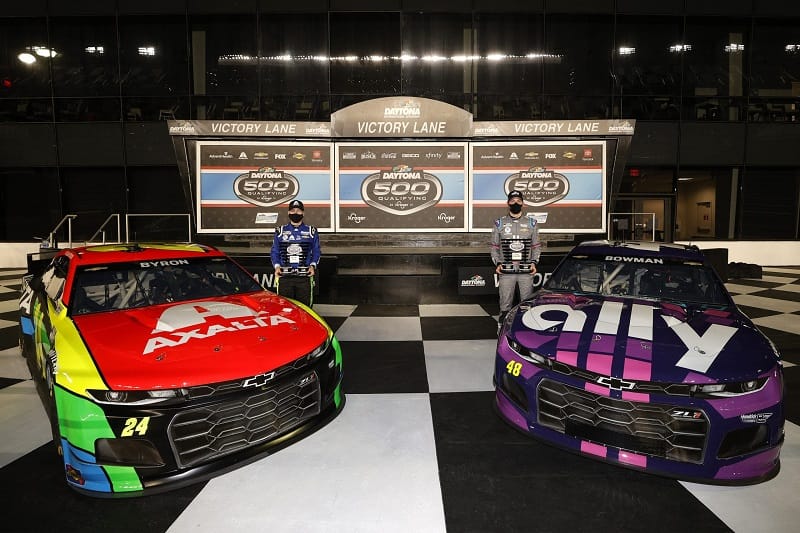 Alex Bowman is pretty good at qualifying for the Daytona 500. For the fourth consecutive year, he will begin the NASCAR Cup Series season on the front row for the 500, but will particularly do so from the pole position for the second time.

Bowman, who won the pole in 2018, repeated the feat in Wednesday night’s qualifying session with a dominating single-car run in which he went 191.261 mph, over a mile faster than second-placed Hendrick Motorsports team-mate William Byron. Hendrick and Chevrolet have dominated 500 qualifying for much of the last decade, with a Chevy driver winning the pole every year since 2013 and a Hendrick driver specifically in six of the last seven years. The exception to the latter was Ricky Stenhouse Jr. of Hendrick ally JTG Daugherty Racing in 2020. During the first practice session of Speedweeks earlier in the day, the four Hendrick drivers opted to perform single-car runs emulating the qualifying format instead of drafting like other teams, which resulted in the quartet being mired in the twenties but provided additional preparation for qualifying.

“I think for us, we’ve started up there together before so I feel like for us, we can rely on that experience, especially being teammates with Alex for the last three years,” Byron commented in his post-qualifying press conference. He is no stranger to winning at Daytona, having won the fall race last season for his maiden Cup victory. “It’s really been comfortable to work with him.

“I feel like that’s the goal, is to stay up there and contend and lead a bunch of laps and control the lanes; that’s our goal first and foremost. But you’ve got to get to the end as well, and if you get yourself in tough positions, you just have to realise that it’s better to try to rally back at the end of the race and not tear something up.”

The pole is the #48 car’s first in the 500 since Jimmie Johnson in 2008; Bowman took over the famed #48 for 2021 after Johnson’s retirement. Byron, the 2019 pole winner, took the fastest time from Bubba Wallace and staved off a charge from Aric Almirola before being surpassed by his team-mate. Almirola and Wallace, the latter of whom led the first practice session, respectively qualified third and fourth.

“It’s much more about Hendrick Motorsports and the #48 team, (crew chief) Greg Ives, the engine shop, the chassis shop, body shop, Chevrolet, everybody at Ally for all their support. It’s more about the people that make it happen.”

While Wallace and his new 23XI Racing team were the talk of the show, fellow series newcomer Trackhouse Racing Team also enjoyed qualifying success as Daniel Suárez was tenth. Trackhouse co-owner Justin Marks tweeted, “Lots of work ahead this week but couldn’t be more pleased!”

Ryan Preece and David Ragan were the two fastest cars among the eight non-chartered teams, enabling them to clinch spots in the 500. Preece, who plans to run the full schedule but his #37 JTG team lost its charter, was the eighth-fastest overall. Ragan and his #36 Front Row Motorsports machine was thirteenth and will race in the 500 for the second year since his retirement from full-time competition.

With Preece and Ragan locking themselves in on time, the other six open drivers—Austin Cindric, Kaz Grala, Ty Dillon, Garrett Smithley, Timmy Hill, and Noah Gragson—will have to step up in Thursday night’s Bluegreen Vacations Duel. Gragson faces an uphill battle as he will start from the rear; his #62 Beard Motorsports car failed pre-qualifying technical inspection thrice, disqualifying him from setting a qualifying time.

Derrike Cope, preparing for his final race as a NASCAR driver, also did not set a time due to a battery issue. However, the 1990 Daytona 500 winner is guaranteed a slot in the race via charter.

Qualifying was delayed for fifteen minutes when the speedway’s infield lights abruptly went out due to a power grid outage in Daytona Beach. While no cars took the track as a result, a hypothetical darkness-filled session would not be a first for Daytona or Speedweeks; in 2011, final practice for the now-Busch Clash was briefly held in the dark when the lighting on parts of the speedway shut off.

The Bluegreen Vacations Duel is set for Thursday night. Bowman and Byron will start on the pole for each race, and their finish in their respective Duel does not impact their front-row starting positions for the 500.