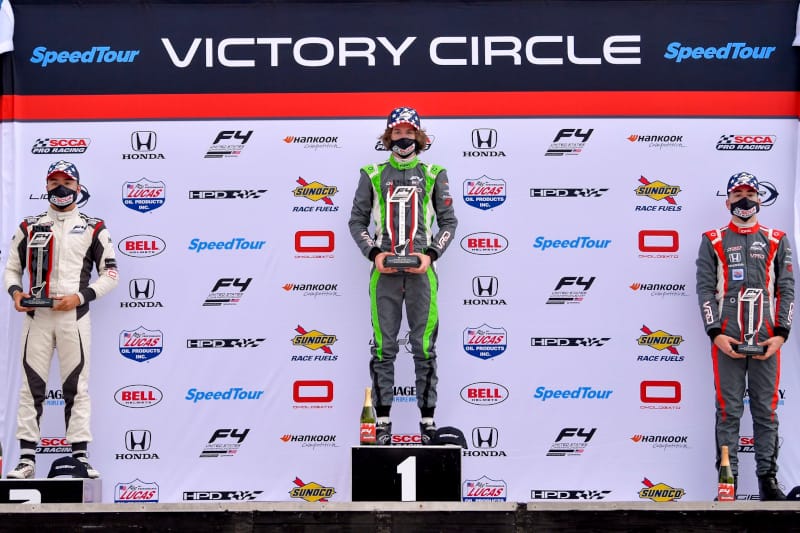 Jason Alder atop the podium at Road Atlanta. (Photo Credit: @F4Championship on Twitter)

F4 U.S. Championship rookie Jason Alder started the season looking like anything but, as the Velocity Racing Development driver won two of three races at Michelin Raceway Road Atlanta this past weekend.

Defending series champion Noel Leon of DEForce Racing sat on the pole for Race 1 on Friday, and battled Alder all race long for the lead. Late in the event, Chase Gardner spun and got caught in the gravel trap, bringing out a caution and setting up a two lap sprint to the finish. Alder was finally able to pass Leon, who led 10 of the race’s 13 laps, to take his maiden win in F4. Alder’s VRD teammate Nico Christodoulou would round out the podium in third.

Matt Christensen and Mac Clark would round out the top five.

Alder started on the pole for Race 2 on Saturday alongside Christensen, picking up where he left off in Race 1. A four car pileup in the esses section brought out a yellow flag. At the restart, Alder’s lead was challenged by Leon and Arias Deukmedjian of Crosslink/Kiwi Motorsport in an exciting scrap, with Deukmedjian almost squeezing Alder into the grass on the frontstretch.

Leon would finally best Alder in third and final race of the weekend, winning from the pole with Alder right beside. Deukmedjian would finish in third for his second podium of the year, while Christodoulou and Christensen would make up for poor second races by returning to complete the top five.

Emily Linscott, who will be chronicling her F4 experience here on The Checkered Flag, started her season with two fifteenth place finishes and then her first points of her F4 career with an eighth place finish in Race 3. That top ten finish checked off one of her pre-season goals, and Linscott was pleased overall with the weekend.

“I’ve learnt so much from each of the races but I am still a long way off what I know I can deliver if I had a full testing program, but hey, I’m here and I’m fighting for what I can with every ounce of my skill, and I’m getting better and better each time I drive the car,” she said.

The next event will take place at Road America on 14-16 May.