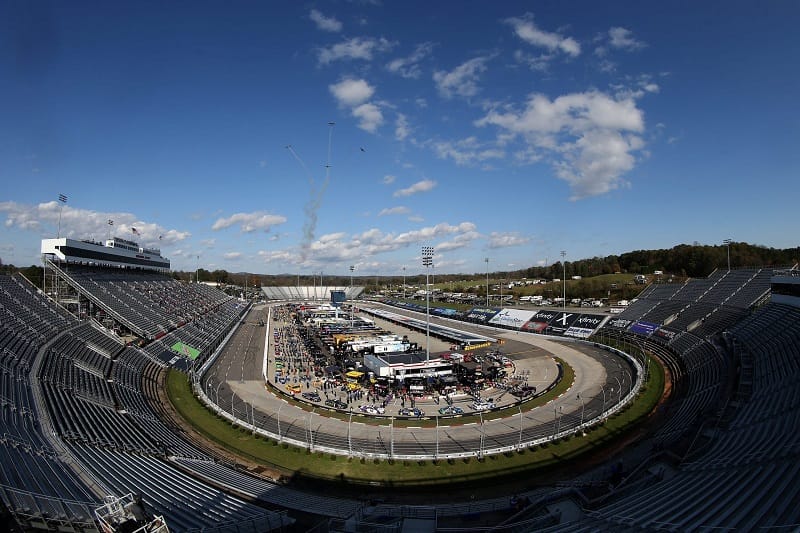 Rain and ovals generally do not mix well together, but this is not stopping NASCAR from trying. On Wednesday, the sanctioning body announced Cup Series drivers Kyle Larson and Chris Buescher will test rain tyres at Martinsville Speedway on Thursday. Martinsville is currently the site of Next Gen Cup car testing ahead of its début in 2022 as the three manufacturers (Chevrolet, Ford, Toyota) introduce their brand-specific vehicles.

The goal of the test is not to see if oval races in the rain are viable, but to find out if such races can begin even in the wet. It is not uncommon for NASCAR oval races to be delayed or postponed entirely due to rain, with the season-opening Daytona 500 and last week’s Bristol dirt race falling victim to Mother Nature.

While many non-NASCAR fans tend to joke about stock cars refusing to turn laps in the rain on ovals, it is impractical in its current state as the cars’ weight and speeds on high bankings make it easy for tyres to quickly degrade. Slick tyres are obviously out of the question (most notably evidenced by the rainy and disastrous opening lap of the 2001 All-Star Race at Charlotte Motor Speedway when multiple cars wrecked in the first two turns), while treaded rain tyres are also currently unable to develop enough traction on the banks.

Despite these concerns, Goodyear’s rain tyres have held up fairly decently during wet races at the Charlotte Roval and Daytona Road Course, both of which are ovals with infield circuits. Unlike its fellow short tracks Bristol and Richmond, the .526-mile Martinsville has remarkably flat banking at just 12 degrees.

“I think the overall goal is anything we can do to speed up the drying process, regardless of the technology, to allow us to get back to racing more quickly is a benefit to the fans,” said NASCAR Executive Vice President Steve O’Donnell. “We’re always trying to innovate, and you saw that with what we’ve done around the track-drying system and that’s worked out well. We’ve always looked at what’s the next iteration. If you’ve looked at what the teams have been able to do with more road racing coming into the fold, the idea of short tracks and could we work with Goodyear to find a tire that would allow us to get back to racing sooner under wet-weather conditions.”

Martinsville is no stranger to rain tyre testing. In September 1995, while Cup practice was under rain delay, Terry Labonte was sent out on rain tyres. Unlike at road courses, where such tyres could be deployed to race even in pouring rain, the oval test was intended to see if races could at least start in wet conditions. However, the eventual NASCAR Hall of Famer was less than positive about the session, describing it as like “I was on ice. I’d go in the corner and it wouldn’t turn very good. I’d get in the throttle and think it wasn’t bad, then the back end would break loose.”

On the other hand, rain tyres were a fairly new addition to NASCAR at the time, first débuting at Watkins Glen earlier in the year. Rain tyres would see sporadic use for road racing over the next twenty-five years, though only the lower Xfinity and Camping World Truck Series have actually tried them in races, the latter most recently doing so at the Daytona Road Course in February. The Cup race that weekend also provided teams with the opportunity to switch to rain tyres, but the field opted against it as the track remained mostly dry.

“I think at this point, we’re not talking about if it’s actually raining,” O’Donnell added. “It’s more so, can we get back more quickly than the track being completely dry, which is what we require now. That’s part of the test, looking at where’s the limit, where we would feel comfortable for the drivers.

“We want this to be safe, so that will be part of this test—talking to the drivers, what are they comfortable with—then obviously talking to Goodyear and (director of racing) Greg Stucker and his team about how they feel and how the tire performs, what if any tweaks we could make to that tire coming out of Martinsville, so there’s a lot that we’re hoping to learn here in terms of grip levels. Each track is unique, so this is something we’ll have to look at for multiple venues.”

Jennifer Jo Cobb not approved for Cup debut at Talladega

By Justin Nguyen
2 Mins read
Rick Ware Racing had signed Jennifer Jo Cobb for her NASCAR Cup début at Talladega this Sunday, but NASCAR has not approved her to race for various reasons.
NASCAR Cup Series