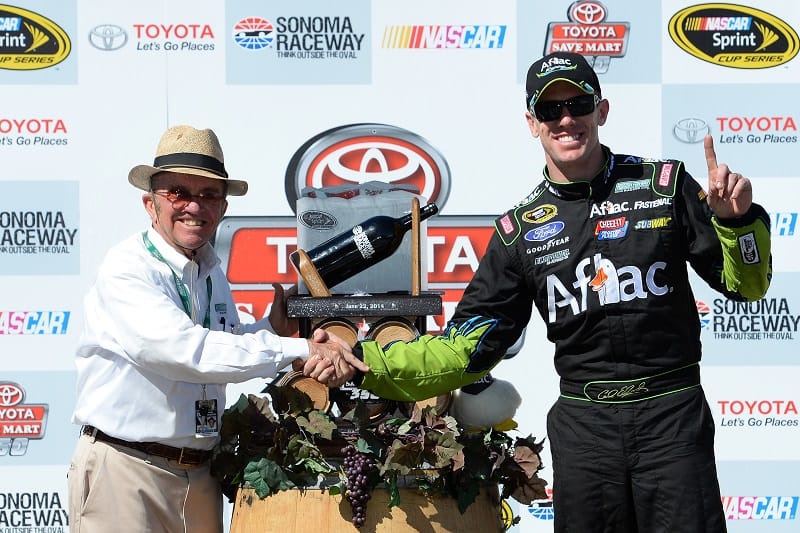 Not much has been heard from Carl Edwards after his retirement from the NASCAR Cup Series at the end of the 2016 season. In one of his rare returns to the racing world on Friday, Edwards told FS1’s NASCAR Race Hub that he would be fairly interested in making a one-off start in the future on a road course or in the event that NASCAR changes its aerodynamic package.

“(My wife) would let me just because it would get me out of the house,” Edwards told Bobby Labonte when asked about a comeback, even for just one race. “I have thought about it a little bit. I miss the driving part a lot, I miss the people, I don’t miss the schedule, but something like that—a one-off—would be a lot of fun. I had a chance to go do some testing in the sim for Daytona and that was really neat.

“Towards the end of my career, I really enjoyed the road courses. So if I were gonna do something, it would probably be on a road course or if NASCAR, by chance, changed the package to where there was no downforce and about a thousand horsepower, I could probably get pretty interested in that too.”

From 2005 to 2016, Edwards was one of the Cup Series’ popular names. A 28-time race winner, he finished second in the championship in 2008 and 2011, the latter of which ended in a tiebreaker with Tony Stewart. His final season in the sport saw him win three races and make the Championship Round, but he finished thirty-fourth after being caught in a late wreck. For his accomplishments, including winning the 2010 championship in what is now the Xfinity Series, he has been nominated for the NASCAR Hall of Fame.

His lone Cup road course win came at Sonoma Raceway in 2014 when he led the final twenty-six laps. In 24 career road races, he has the win, nine top fives, and fourteen top tens. Edwards also has three RC victories in the Xfinity Series at Circuit Gilles Villeneuve in 2009, Road America in 2010 (his lone career start there and the series’ inaugural trip), and Watkins Glen International in 2012 (his final Xfinity race).

Should Edwards decide to make his return on a road course in 2021, he will have a plethora of tracks to choose from as all three national series will visit record highs on such circuits. Excluding the replacement date on the Daytona Road Course in February, the Cup and Xfinity Series each visit six road courses, including Road America in July, while the Camping World Truck Series heads to four. For the entirety of Edwards’ career, the Cup Series only featured two road races (Sonoma and Watkins Glen).

Never one for social media, Edwards has mostly stayed out of the spotlight since his departure. In the Race Hub episode, he explained he has spent his retirement travelling the world in addition to doing farmwork, including sailing across the Atlantic Ocean in what he called “the adventure of a lifetime.” The 41-year-old has also been rumoured as a potential candidate for Senator in his home state of Missouri in 2022.

While he has not closely followed NASCAR since exiting, he took a look at last week’s practices for the Bristol Dirt race weekend.

“I don’t watch a lot of racing but I had to watch some of that,” he commented. “The other day, I really wanted to see what practice looked like, and I watched about a […] six-minute clip. Afterwards, I told my wife, I said, ‘Boy, that looks fun. I think I could actually make it there and there might be a car for me to drive.

“It looked so neat, those cars. My whole career, my favourite thing has been the cars sliding around and managing the horsepower, managing the traction, the tyres. And that race, I don’t know what it really felt like to drive and if it wasn’t any fun, I don’t want anyone to tell me that because it just looks like a blast.”

In regards to the aero package, NASCAR’s NA18D has sparked widespread debate since its introduction, especially at intermediate tracks. At 550 horsepower and featuring high downforce, it has faced criticism for sacrificing speed in favour of close racing, while dirty air has made it difficult for drivers to pass the leader. However, a 750-hp, low-downforce setup will be used for most of the 2021 schedule. Road courses utilise a different package entirely.

Edwards was a longtime proponent of low-downforce cars throughout his career. He was vocally critical as NASCAR trended towards higher downforce in the early 2010s, and conversely gave positive reviews when the sanctioning body reversed course and decreased it with smaller spoilers in his final years. Before the 2016 season, he expressed that “we should be racing cars with no aerodynamic aids – no downforce, no sideforce. That’s what stock car racing is about.”

By Justin Nguyen
2 Mins read
In a stunning development, Richard Petty Motorsports has sold off its two charters and a majority interest to new NASCAR Cup team GMS Racing. The legendary #43 car will likely still remain as RPM instead of rebranding to GMS.
NASCAR Cup SeriesNASCAR Truck Series

By Justin Nguyen
1 Mins read
2020 NASCAR Cup champion Chase Elliott will make his Nitro Rallycross début at the FIRM on 4/5 December. He follows 2015 champ Kyle Busch in being the newest NASCAR/rallycross crossover.