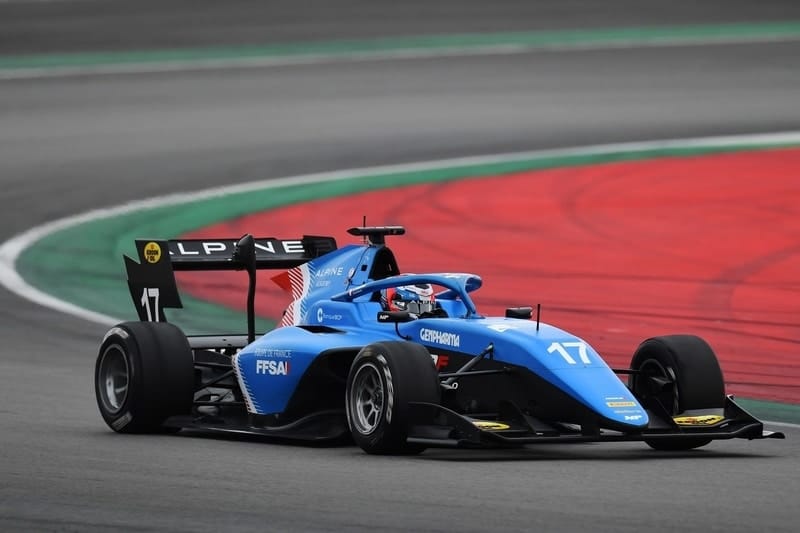 The FIA Formula 3 Championship continued preparations for the 2021 season with their second two-day pre-season test, this time at Circuit de Barcelona-Catalunya ahead of the opening round at the same track next month.

And after early morning rain left the track sodden for much of the morning’s running, it was reigning Formula Renault Eurocup champion Victor Martins who topped the times for MP Motorsport.

The Frenchman set a blistering 1:31:743 with the fastest time in all three sectors to end the day a whopping six tenths clear of the field. Martins’ time brings further encouragement for MP Motorsport after Caio Collet set a lap record pace in the first pre-season test at the Red Bull Ring in Austria.

Second quickest on a day where the track got faster with every lap turned was Trident’s Jack Doohan who believes he is one of the title favourites having been consistently quick in testing for his new team.

His teammate for 2021, Clément Novalak, was fourth fastest further underlining Trident’s outright pace with Frederik Vesti splitting the two as the Dane also aims for Championship glory with ART.

It was another highly impressive day for 2020 ADAC Formula 4 runner-up Jak Crawford as the 15-year-old Texan was fifth fastest having topped the morning’s soggy session, cementing himself as the lead driver at Hitech GP despite this being his rookie year at F3 level.

Michael Belov drove a part-time schedule for Charouz last year and he was sixth quickest again for the Czech team. He and Logan Sargeant drove the two spare Charouz cars with only Reshad De Gerus confirmed to race for the team this season. Sargeant also snuck into the top ten in ninth while De Gerus was 28th.

PREMA have dominated the previous two seasons of FIA Formula 3 but they are yet to set the world alight in testing with Dennis Hauger the lead driver today in seventh, just ahead of Collet, Sargeant and ART’s Aleksandr Smolyar who completed the top ten.

The other two PREMA drivers Olli Caldwell and Arthur Leclerc were 11th and 16th respectively after also not troubling the top times in the morning, deciding to not risk their cars too much in tricky conditions.

By Michael Callander
2 Mins read
Alexander Smolyar won the FIA F3 Feature Race in Hungary ahead of Zane Maloney and Oliver Bearman, who produced a photo-finish for second place.
Formula 3

By Michael Callander
1 Mins read
Two years after his last FIA F3 pole, Alex Smolyar put his MP Motorsport car on pole position for the Feature Race in Hungary, with Oliver Goethe leading the field for the Sprint.