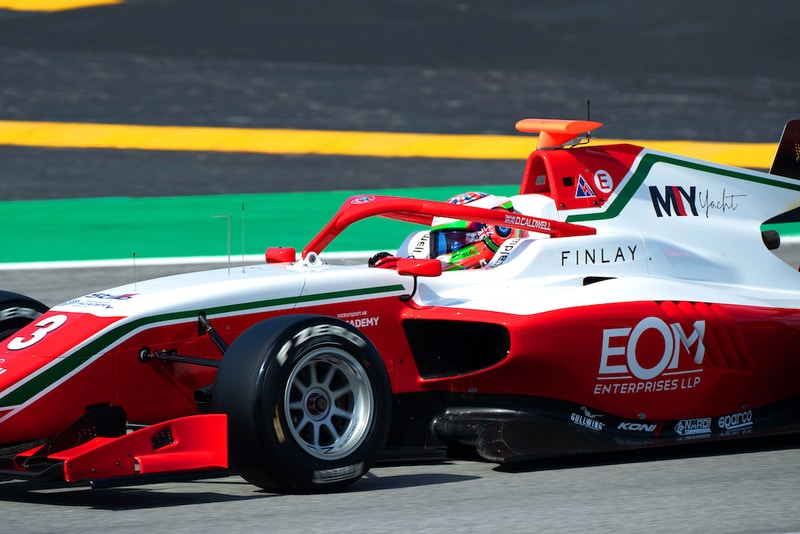 In typical FIA Formula 3 fashion, Olli Caldwell benefitted from staying out of trouble to claim his first victory in the series under the baking hot Barcelona sun.

David Schumacher led much of the race in his Trident but the drama started as Enzo Fittipaldi attempted to take the lead back that he’d lost early on. The Brazilian tried to go round the outside but he got on the yellow sausage kerbs and he was bounced into the Trident, ending both of their races.

That promoted Matteo Nannini to the lead but that would also go up in smoke as the two leading cars collided for the second time in the 22 lap race. Dennis Hauger tried to squeeze his PREMA down the inside into turn one but he too clipped the yellow sausage kerbs and he spun Nannini round, while also breaking his front wing, taking both cars out of contention.

And after all that, Caldwell was almost involved in a third lead collision as Victor Martins went for glory on the final lap, they were millimetres apart from each other but the MP Motorsport driver took to the run off to avoid contact and finished second.

It’s more good points for the Frenchman who starts tomorrow’s main race from third, directly ahead of Frederik Vesti who also benefitted from the carnage at the front to stand on the podium in third.

Clément Novalak enjoyed another very successful race finishing fourth in his Trident ahead of Caio Collet just as he did in the first race where the pair were both on the podium.

Jonny Edgar battled hard in the midfield for sixth ahead of fellow Red Bull junior Ayumu Iwasa for Hitech GP, Jack Doohan (who starts on the front row tomorrow) and Jak Crawford.

Juan Manuel Correa provided the fell good story of the day by finishing tenth and claiming his first point since returning to the cockpit after the horrific crash at Spa in 2019 which caused him serious leg injuries, on top of Anthoine Hubert’s fatal impact.

Turn two also saw contact on the opening lap as race one winner Aleksandr Smolyar experienced the contrasting emotions by crashing out with Logan Sargeant before the race really got going.

By Joe Ellis
2 Mins read
Trident remained the team at the top as Clément Novalak led the way on the final day of F3 testing in Jerez.
Formula 3

By Joe Ellis
2 Mins read
Jack Doohan topped both sessions on the first day of Formula 3 testing at Jerez.
Formula 3