Dixon tops 233 mph to lead the way on Fast Friday 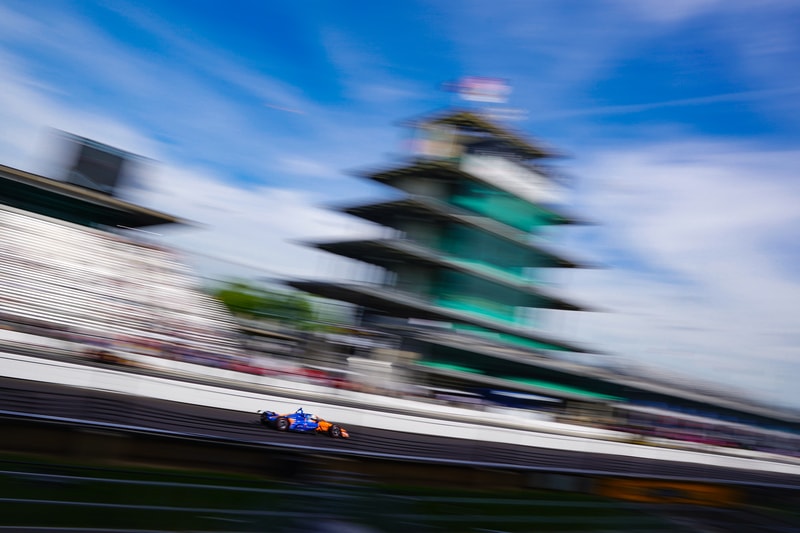 Chip Ganassi Racing‘s Scott Dixon set the fastest lap of the day on ‘Fast Friday’ at the Indianapolis Motor Speedway, as the teams and drivers switched their focus to start preparing for this weekend’s qualifying sessions. As is tradition, ‘Fast Friday’ saw the teams turn up their turbo boost to qualifying levels, with twenty-seven of the thirty-five drivers turning a lap above 230 mph.

Dixon’s best lap of 233.302 mph would see him take the fastest lap of the day for the second time throughout the four days of practice so far. It would also be Ganassi’s third consecutive day on top.

However, whilst Dixon’s single-lap speed was impressive, it did come with the help of a slipstream from another car; something that will not be available during single-car qualifying this weekend. Furthermore, the drivers will need to run four consecutive laps in qualifying, with their result being determined by their average speed across all four laps.

The fastest driver over the course of four laps and without the help of slipstream would also be from the Ganassi stable. Marcus Ericsson in the #8 Honda would set an average speed of 231.950 mph, with Andretti Autosport‘s Colton Herta and Arrow McLaren SP‘s Patricio O’Ward not far behind. As for single-lap, no-tow speeds, Andretti’s Alexander Rossi had the fastest lap at 231.598 mph.

Whilst the overall results for ‘Fast Friday’ are complicated slightly due to most drivers running with a slipstream, what is evident is that there are many drivers from many different teams that could challenge for the top nine positions in Saturday’s qualifying session that will then go on to contend for pole position on Sunday.

Dixon’s fastest overall lap of the day would be backed up by his three teammates, all of whom would finish inside the top-five today. Andretti’s Colton Herta would spoil the party in second place, but Tony Kanaan, Marcus Ericsson and Alex Palou would take positions three, four and five respectively. Given Ganassi’s speed over the last few days, it would be a major disappointment for the team and a surprise for many if all four were not able to reach the Fast Nine tomorrow.

The fastest Chevrolet driver, both overall and on the no-tow report, would be McLaren’s Patricio O’Ward. The Mexican driver continued to look very decent in the #5 car and would be the only Chevrolet driver inside the top ten. His teammates, Felix Rosenqvist and Juan-Pablo Montoya, however, don’t look quite as comfortable nor as fast. Rosenqvist would be down in twentieth in the #7 car, whilst Montoya would be twenty-fifth in the #86 car.

The seventh-fastest driver on Friday would be Andretti’s, Alexander Rossi. Alexander – along with second-placed Herta – looks to be the most comfortable and the most consistent of the Andretti stable, as both have been among the fastest with and without a tow over the last few days in both race and qualifying trim. Rossi, who has been somewhat snake-bit at Indianapolis since taking his victory back in 2016, will be hoping to challenge for pole position this weekend in order to give him the best possible chance of tasting the milk once again.

Rahal Letterman Lanigan Racing are another team that have impressed many over the last few days; if you ignore the slight embarrassment of their photo-shoot faux pas on Thursday. Takuma Sato would take the team’s best lap of ‘Fast Friday’ with a speed of 231.598 mph. The Japanese driver looks to be among the drivers at the very top of most people’s prediction lists for both pole position and the race win. He has looked strong in his #30 Honda throughout practice so far and will no doubt be as hungry as ever to try and take his third Indianapolis 500 victory.

Meanwhile, Graham Rahal also looked fast in the sister #15 RLLR Honda. He would take the eleventh best-lap overall on Friday, but he would be second-fastest on the no-tow report. The third RLLR car of Santino Ferrucci would be slightly further back on the overall times in fourteenth place; with the young American putting in a decent effort to bounce back from his hard crash on Thursday. As a token of his appreciation, on his return to the pits after completing a strong run, he would go and thank the mechanics – both from his car as well as Rahal and Sato’s cars – for their efforts in repairing the #45 car.

Other than the aforementioned O’Ward, it would be Ed Carpenter Racing that once again looked to be the fastest Chevrolet-powered team. Rinus VeeKay took the twelfth-fastest time of the day, with Ed Carpenter fifteenth and Conor Daly nineteenth. ECR cars are usually among the fastest when it comes to qualifying at Indianapolis, so don’t be surprised if all three drivers are in contention for pole this weekend.

At the other end of the spectrum, however, Team Penske‘s lacklustre pace continued. All four drivers would be outside the top twenty on ‘Fast Friday’, with Josef Newgarden in twenty-second, Scott McLaughlin in twenty-fourth, Will Power in twenty-ninth and Simon Pagenaud in thirtieth. Whilst we are nowhere near a situation like 1995 – where Penske failed to qualify for the Indianapolis 500 – Penske will undoubtedly be unsatisfied with their preparation so far. Furthermore, if someone springs a surprise and Penske are unable to find a little more speed, we could very well see a major scalp when it comes to who is bumped from the field.

However, with thirty-three spots available and thirty-five cars on the entry list, there are more likely candidates when it comes to who will fail to qualify. Sadly, the most likely driver to not qualify remains RC Enerson in the Top Gun Racing Chevrolet. Enerson, once again, propped up the timesheets. His best lap speed would be 226.055 mph, whilst the next car – thirty-fourth placed Charlie Kimball – would post a lap of 228.520 mph.

Realistically speaking, Enerson will be hoping that two other cars hit trouble so that he can make the field. If he were to do so, it would be one of the greatest stories in Indianapolis 500 qualifying history; given how little preparation Top Gun Racing have had. Potential candidates who could join Enerson in the last-row shootout include the three A.J. Foyt Enterprises cars, with Dalton Kellett, Sebastien Bourdais and Charlie Kimball all flirting with the bottom of the time-sheets.

The first day of Indianapolis 500 qualifying will take place on Saturday. At the end of the day, positions ten through thirty will be set in stone. On Sunday, the fastest nine drivers will qualify again; this time with the goal of securing pole position. After that, the slowest five drivers will fight it out for the final three positions on the grid in the ‘Last Row shoot-out’. Following this, we will have our grid for the 2021 Indianapolis 500 and we will know which two drivers will sadly have to watch from the sidelines.

By Griffin Schmoyer
6 Mins read
Patricio O’Ward took the win from a dominant Josef Newgarden in the second race of the Chevrolet Grand Prix of Detroit, becoming the first repeat winner this season in IndyCar.