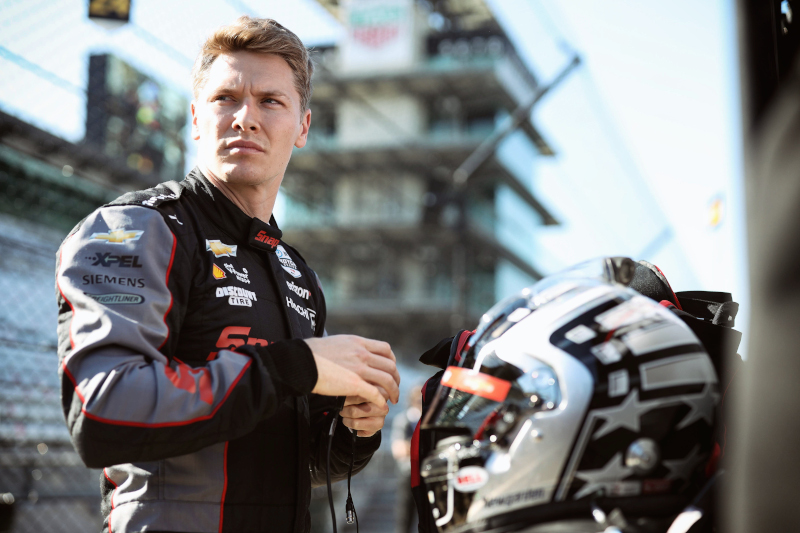 Team Penske‘s Josef Newgarden mastered the much hotter track conditions at the Indianapolis Motor Speedway Road Course, going fastest in the second practice session of the day ahead of the GMR Grand Prix. Fighting at the top of the time sheets all day, Newgarden’s time of 1:09.332 was enough to keep him at the very top by the time the checkered flag flew.

Track temperature increased by roughly seventeen degrees Celsius from the early session, and drivers had their hands full adjusting to the more slick racing surface. Many drivers fell victim to lock-ups at the ends of IMS’ long straightaways and spins all across the track. Luckily, there were no red flags in the session.

Ed Carpenter Racing‘s Rinus Veekay had another spectacular session, finishing second with a time of 1:09.402. The young Dutchman led the early stages of the session and was consistently quick despite a spin at the second to last corner with twenty-three minutes remaining, and is putting himself in position for a great weekend at the track that has provided him his best IndyCar results.

Three-time GMR Grand Prix winner Will Power finished the session third fastest with a time of 1:09.474, improving ten places from his thirteenth place finish in Practice 1. He too spent time at the top of the timing sheets, showing the speed everyone knows he has at the track. He will be a major threat for pole later this afternoon.

Andretti Autosport‘s Colton Herta celebrated signing a new two-year contract with the team between practice sessions with a fourth place finish at a time of 1:09.499, the only Andretti car inside the top ten in this session.

Rookie Scott McLaughlin put together another top-ten finish in practice, improving from seventh to fifth this afternoon with a lap time of 1:09.551, as he continues to impress in his first full season in IndyCar.

Meyer Shank Racing are always consistent at IMS’ Road Course, and Jack Harvey put together yet another top-ten finish with a 1:09.619 lap time good for sixth place. MSR and Harvey’s best finish came at this race in 2019, finishing third in the rain-soaked event.

Romain Grosjean continues to impress in his first trip to IMS in an IndyCar, finishing seventh with a lap time of 1:09.621 for his second top-ten finish of the day. Returning to Dale Coyne Racing with Rick Ware Racing after not competing at Texas Motor Speedway, Grosjean could possibly make the fast six for the first time in his career later today.

Simon Pagenaud made it four for four on Penske machines in the top ten in Practice 2, with his 1:09.737 lap good enough for eighth place, an improvement from eleventh in Practice 1.

Rounding out the top ten were the top two Arrow McLaren SP cars of Patricio O’Ward and Felix Rosenqvist, who finished ninth and tenth respectively with times of 1:09.739 and 1:09.774. Their teammate for May, Juan Pablo Montoya, continued to struggle acclimating to the car with a few spins this session and a dead-last finish.

Chip Ganassi Racing‘s Alex Palou was finally able to get out on track after missing Practice 1 with a leak in a hose that goes into the radiator, and set the thirteenth-fastest time of 1:09.845. His teammate Scott Dixon however, struggled at the end of the session with an unknown issue that the team believes to be either the clutch or electronics, but were unable to confirm.

Dixon has not yet been in the top ten this weekend at a race that he dominated last year, and the team will hope to have the issue fixed by qualifying for the six-time IndyCar champion. CGR’s resident rookie, Jimmie Johnson, finished the session twenty-fourth.

Charlie Kimball, who makes his return to the series with A.J. Foyt Enterprises, finished the session twenty-second, up one position from the morning session.

By Justin Nguyen
1 Mins read
After finishing sixth in the Indy 500 with Rahal Letterman Lanigan, Santino Ferrucci will also run the upcoming race weekend in Detroit for the team.
FeaturesIndyCarInterviews

By Griffin Schmoyer
7 Mins read
Meyer Shank Racing have gone from one off team to full time IndyCar competitors and Indy 500 Champions in five years. Co-owner Mike Shank and driver Jack Harvey sat down with TCF to talk the team’s rise to the top.
IndyCar

By Paul Hensby
2 Mins read
Simona De Silvestro and Paretta Autosport both want to return to the NTT IndyCar Series after they collaborated for the Indianapolis 500 in 2021.