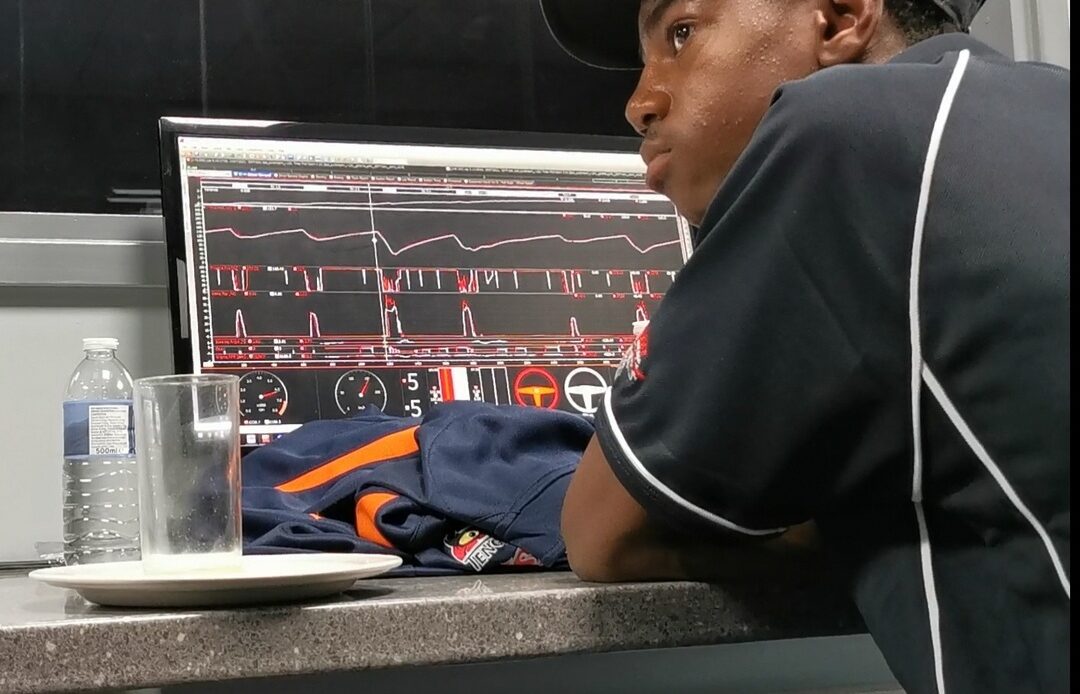 I didn’t know what to expect at Brands Hatch. I had done a couple of test days there, but very early on before I had got to grips with the car. The Indy layout looks simple, but it’s a very technical circuit to get right as there’s no let up the mental concentration required as it’s predominantly curves all the way round. That also makes it unrelenting on trying to keep inside the track limits sensors.

The weekend was threatening to be a mix of wet and dry. I don’t mind either. Dad was hoping it would be wet. It was hot and dry on Friday and the two thirty-minute practice sessions went well. I felt fitter and completed both sessions with consistent pace. I was feeling positive for progress in qualifying.

On Saturday it was dry again. The tow isn’t as crucial at this track and so we went out to find space and put in as many fast laps as we can before the tyres are past their best. I was surprised to put it on the sixth row, qualifying eleventh for race 1 (third rookie) and my second fastest time put me ninth (second rookie), on the fifth row for race 2! More great progress!

The racing would be a new challenge, because starting in a different part of the grid to the previous race would mean learning to cope with different drivers that I hadn’t raced against before. A good start would be essential so as not to get swallowed up by the pack. Race craft too. I was going to have to learn fast.

Race 1. My start wasn’t perfect, and I got way too much wheelspin but I was still in the mix. I made some moves and was up to eighth on lap 1. That would get me my first rookie third place podium. However, halfway through the race, there was contact between two cars in front of me. After they went off the track, one of them came back on the track further around the bend towards Clearways into my path. I managed to avoid a collision, but my race was over as I was on the grass and then heading for the wall so by the time I had collected it up I was way down the order and finished twentieth.

Race 2. I started twelfth instead of ninth. Remember what I was saying about race craft. I was involved in a collision that was deemed my fault. Sorry to the other driver involved. I therefore took a 3-place grid penalty for race 2. I will learn from it. This time my start was much better. I had a clean race and was trading places with various drivers and with the race cut short by an incident, it was just as I was settling into a rhythm against my opponents. I finished thirteenth. My best race result yet.

The drivers you are racing with, you start to get to know them more off track as well as you discuss the battles you enjoyed together. I got know more of the drivers more personally and that’s a good thing.

After an early start and 3 drives on the Saturday; qualifying, race 1 and race 2, Sunday is the exact opposite. With only 1 race and it starting after lunch, it’s a long wait, plus after breakfast and lunch, you can been feeling like the day is over. Then you must get yourself into race mode in the afternoon.

Race 3. I started thirteenth based on my race 2 finishing position. An early safety car caught out the whole grid as it picked the pack up before we could see a Safety Car board. Therefore, the heavy deceleration from racing speeds rippled through the pack and I was caught up in a collision that bent the steering. For the rest of the race, I was driving with the steering wheel at a 45-degree angle. Nevertheless, I managed to fight until the race was ended early after fluid on the track carried a lot of cars off the circuit. I was running in twelfth place but on the roll back after the red flag I was classified as thirteenth. Still, my best ever finishes and best race weekend so far.

The next round is at Oulton Park, 31 July – 1 August. Hoping for more of the same.

In July I had a great day hosting my sponsor Integrated Air at Sim Track Driver Performance Centre for a corporate experience where Graham Marginson and Phil Graham  were coached around Silverstone in the Ginetta Cars G55 Supercup car around Silverstone International. It’s a brilliant environment run by Adam Croft and James Kellett and I really recommend it for the simulator experience day, driver coaching and Ginetta factory tour.

Also, thanks to Ginetta Cars Lawrence Tomlinson for taking the time out to show us the Akula supercar and the engineering behind it. Thank you to my Dad Cecil Henry for making it all possible.

By Maurice Henry
4 Mins read
Maurice Henry talks about the opening races of the 2022 Ginetta Junior season and the progress he is making up the grid.
FeaturesIndyCar