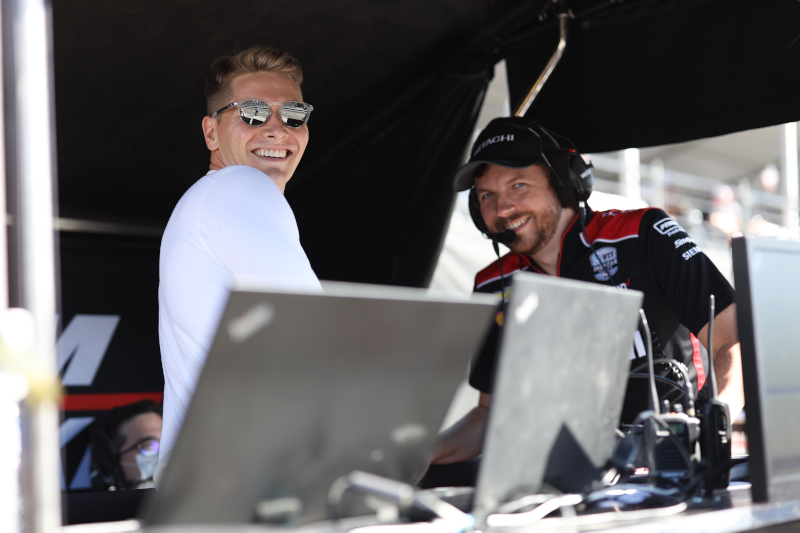 Team Penske‘s Josef Newgarden started out his weekend strong by finishing at the top of the first practice ahead of the Firestone Grand Prix of Monterey. Newgarden held onto the top spot for roughly the last 15 minutes of the session, the only Chevrolet inside the top ten.

Almost every driver found themselves in the dirt during this session including the likes of Alexander Rossi, Sebastien Bourdais, Scott McLaughlin, Rinus VeeKay and more as the drivers got re-acclimated to the limits of WeatherTech Raceway Laguna Seca.

Only one off track excursion brought out a red flag, Helio Castroneves went straight into the gravel trap following a lock-up in turn two with 18 minutes to go. Luckily, the Brazilian kept the car out of the barriers and practice went back to green with 13 minutes left. He finished in thirteenth.

One more red flag flew for McLaughlin that ended the session as he came to a halt on the Rahal straight before turn seven with only seconds left.

Colton Herta, the defending race winner at Laguna Seca, finished just behind his fellow American and had an off-track moment of his own at the very end, going in the gravel on the outside of turn nine. Herta managed to keep his car out of the wall and undamaged.

Championship leader Alex Palou finished third, already showing pace at a track he’s never raced at much like he did in Portland last week. Patricio O’Ward, who is second in the points standings, finished the session fourteenth struggling for grip. Their other title rival, Scott Dixon, finished in eleventh.

Ed Jones of Dale Coyne Racing with Vasser-Sullivan finished the session fourth, adding to the momentum he gained after a strong weekend in Portland. Rossi finished behind Jones in fifth after spending some time at the top of the charts earlier in the session.

In his second race with Rahal Letterman Lanigan Racing, Oliver Askew finished the session in sixth place. The Florida native was consistently in the top ten all session long and was the highest-placed RLL car of the trio.

James Hinchcliffe has struggled this season, but finished seventh today for Andretti Steinbrenner Autosport in a result that will provide a great momentum boost for the team. Castroneves’ MSR teammate Jack Harvey has continued his return to form with a top ten finish in practice, finishing eighth in this session and running consistently in the top ten much like Askew.

Romain Grosjean crashed the pace car while filming a promotional video earlier in the day, but he was unharmed in the incident and finished in ninth on his first trip to Laguna Seca. Rounding out the top ten was Marcus Ericsson, marking the second Chip Ganassi Racing car and ninth Honda in the top ten.