Day One of In-Season Testing See’s Boschung On Top  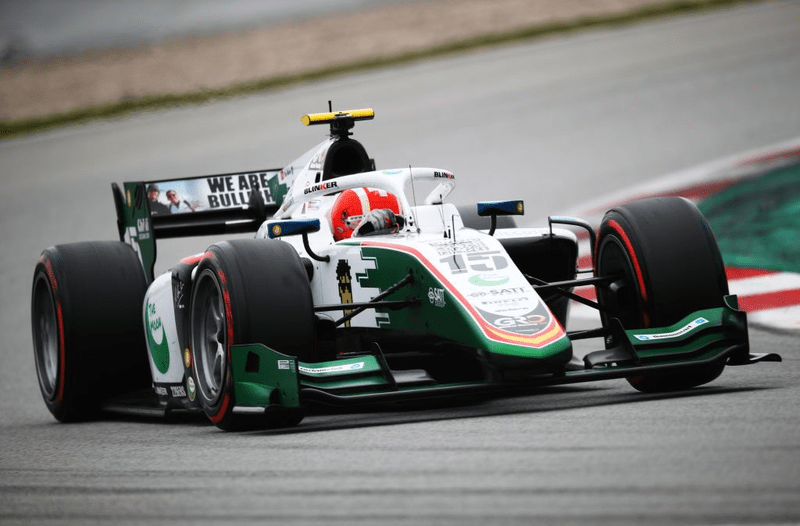 Ralph Boschung set the fastest time of the day in FIA Formula 2’s first day of their in-season testing which took place at the Circuit de Barcelona-Catalunya in Spain.

The Campos Racing driver was the only driver on the grid to break underneath to 1:28s barrier after fifty-five laps of the circuit, with Hitech Grand Prix’ Marcus Armstrong setting the second fastest time which was two tenths off the Swiss.

The day started off gloomy with chilly weather and a few spots of rain. This led to a disrupted morning session with only two of the drivers posting more than thirty laps of the circuit.

The session saw three stoppages with the first being Trident’s Calan Williams who found himself spun around at turn 2. This was followed by Carlin’s Liam Lawson coming to a halt at turn 10 and Cem Bölükbasi sliding into the barriers at turn 9.

For the afternoon session, the track temperature ramped up from fourteen degrees in the morning to nineteen degrees which helped the grid prepare for a few push laps at the end of their race simulations.

Boschung’s initial time of 1m27.929s was nearly two seconds faster than Armstrong’s early benchmark of 1m29.897s. The times started to get faster as the session went on, but nobody was able to topple the Swiss driver’s attempt.

Most of the times were set on the hard compounds of tyres, with Armstrong, Ayumu Iwasa and Marino Sato being the only drivers to set a time within one second of Boschung on the softer compound of Pirelli tyres.

Two more red flags were brought out in the PM session, with Jüri Vips ending his session after making contact with the barriers at turn 3 and Carlin’s Logan Sargeant following his stoppage at turn 1.

As well as leading the timing sheets, Boschung also led the field with amount of laps completed with him and Williams both crossing the line on fifty-five occasions. The afternoon session saw a lot more running than the morning, with only two drivers posting less than thirty laps on the board.

The second day of in-season testing continues on Wednesday and will run through for a total of three days, ending on Thursday. The grid will then reconvene for round three of the championship which takes place at the Autodromo Internazionale Enzo e Dino Ferrari in Imola.

Close to Perfect Weekend for Drugovich after Feature Race Triumph

By Ashley Hambly
2 Mins read
Felipe Drugovich has completed a double winning race weekend after winning Sunday’s Feature Race at the Circuit de Barcelona-Catalunya and extending his lead at the top of the F2 championship.
Formula 2

Drugovich Holds off Iwasa for Sprint Race Win in Barcelona

By Ashley Hambly
2 Mins read
Felipe Drugovich won Saturday’s Sprint Race after taking the lead at turn one and not looking back on the way to his second victory of the 2022 F2 championship.
Formula 2

Doohan Blazes His Way to Pole Position in Barcelona

By Ashley Hambly
2 Mins read
Jack Doohan took his second pole position of the 2022 F2 season after setting a ferocious lap on a scorching day at the Circuit de Barcelona-Catalunya.