Rallycross Returns to Lydden for Round One of the 2022 BRX 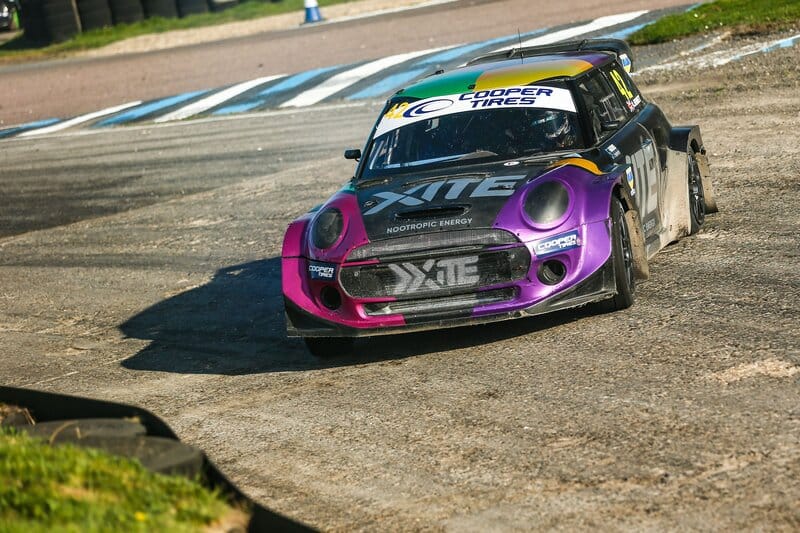 On a very sunny Easter Bank Holiday weekend, rallycross finally returned with a bang to give us plenty of fast-paced action on Saturday 16th of April with BMW Mini driver Oliver Bennett claiming a maiden outright rallycross victory in the opening round of the Motorsport UK British Rallycross Championship 5 Nations Trophy presented by Cooper Tires at Lydden Hill.
The Bristol-based driver brought along his World Rallycross and Nitro Rallycross Mini Supercar much to the fans’ excitement and gave them just what they wanted. The Xite Energy Racing driver led the way in qualifying then led semi-final one and the final race to secure his first-ever overall win.

18-year-old Patrick O’Donovan proved he belongs on the Supercar grid in his debut weekend by qualifying on the front row of the final in his Team RX Racing Ford Fiesta, then took his compulsory joker on lap one before picking his way through the field to finish in second place ahead of the reigning 5 Nations BRX Champion, Derek Tohill who suffered from clutch issues with his PFCRX Ford Fiesta in the latter stages of the final.

Meanwhile, in the Motorsport UK Supernational Rallycross Championship, reigning champion Jason Bleasdale took a clean sweep in round one in his Vauxhall VX220, winning all three qualifying sessions and the final. Paige Bellerby‘s Lotus Exige suffered from a driveshaft issue in qualifying but still claimed second place in the final, then Darren Bleasdale piloted his own Vauxhall VX220 to third place in his first-ever Supernational event.

The trio of Max Langmaid, Will Ovenden and Owen Robbins repeated their 1-2-3 in positions from the 2021 standings in the opening round of the Motorsport UK Junior Rallycross Championship. Langmaid led from the start and was last to joker, staying clear of the battles behind. Ovenden and Robins survived a close joker merge on the previous lap, Ovenden taking the position.

Over in the Retro Rallycross Championship, the blue and green Citroen AX of Steve Cozens clinched round one in the Retro Rallycross category with two qualifying wins and victory in the final. Terry Moore‘s tiny, rocket-like Austin Mini finished second ahead of Rob Buckmaster in his Ford Fiesta Mk1 XR2. Jos Sterkens took the top spot in his vintage Ford Escort in the Super Retro class final despite earlier woes and not starting Qualifier three. The BMW E30 of Vince Bristow topped the qualifying sessions and now leads the championship after finishing ahead of Nigel Davey‘s classic Peugeot 205.

Dave Bellerby won round one in the BMW MINI Rallycross Championship, but the rallycross stalwart didn’t set a single fastest time in qualifying. He was at the front when it mattered however, winning the first semi-final before leading the final from the front to take the win. Tom Constantine and BMW Mini class debutant Craig Lomax completed the podium. Lomax has now moved over to the minis following the announcement that his previous race class, the Super1600 was discontinued at the end of the 2021 season.
Reigning champion Martin Hawkes won the first qualifying race in the All4 Mini class but a clutch issue side-lined him for the rest of the event. David Bell took advantage to top the qualifying points and take the flag in the final with ease followed by Adrian Turner.

Luke Constantine claimed victory in the Swift Sport Rallycross Championship final, avoiding first corner action to run clear at the front of the order. Max Weatherley headed the qualifying standings but ultimately finished second, while James Constantine recovered to finish third having been half-spun at turn one. Extreme E driver Catie Munnings made her Swift Sport rallycross debut but retired from the final.

By Pontus Lindroos
2 Mins read
Vic Elford won the first rallycross event in 1967 in a Porsche 911, 55 years on the iconic Porsche 911 rallycross cars are still shining on the rallycross tracks
British Rallycross

By Mark Cridland
3 Mins read
The XITE Energy Racing driver returned to Lydden Hill for round two of the 5 Nations British Rallycross Championship and gave the fans just the “xite-ment” they were craving and claimed some points at the same time.
British Rallycross

By Mark Cridland
2 Mins read
The first time a Skoda Fabia has been used in the 5 Nations BRX will be by former Supernational racer, Michael Boak.